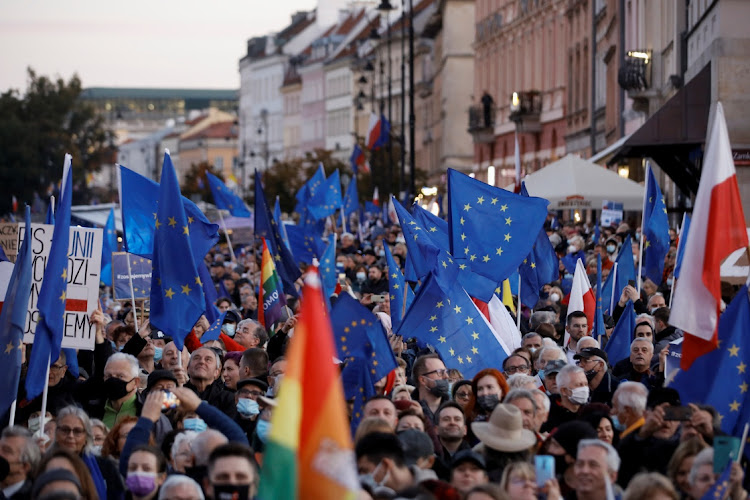 People march in a rally in support of Poland's membership in the EU after the country's Constitutional Tribunal ruled on the primacy of the constitution over EU law, in Warsaw, Poland, October 10 2021. Picture: REUTERS/KACPER PEMPEL

Poland’s nationalist leaders slammed the opposition for spreading “fake news” at the biggest antigovernment protests in 2021, denying claims that the cabinet had plans to pull the nation out of the EU.

The outpouring of anger after last week’s top court ruling that the country’s constitution overrides some EU law has put the government on the defensive and sparked criticism from Germany and France, the bloc’s two biggest members.

It also creates an opportunity for the opposition led by former European Council president Donald Tusk to win back support by playing on the fears of Poland crashing out of the trading bloc. EU membership continues to enjoy widespread popular support among Poles.

“Polexit is fake news,” Prime Minister Mateusz Morawiecki, who brought the contested case to the court, said on Facebook. “This is a harmful myth with which the opposition replaces its lack of ideas about the proper position of Poland in Europe.”

As many as 100,000 people turned up at a rally in Warsaw on Sunday night to hear Tusk “raise the alarm” and accuse the government of trying to take Poland out of the EU with similar protests taking place in 120 cities across the country.

The judgment from the court, stacked with justices appointed by the ruling party, marks a major escalation in Poland’s already fraught relations with the bloc. It also threatens to sink €36bn that the country requested from the bloc’s pandemic aid fund. The ruling Law & Justice party has sparred with Brussels on a string of issues including changes to courts, media freedom and LGBTQI rights.

EU commissioner for internal markets, Thierry Breton sought to lower the tensions on Monday by refraining to discuss the possibility of Poland leaving the EU.

“We’re here to protect the Polish people,” he told France Inter radio in an interview. “Nobody ever forces anyone to join the EU. It’s the people who decide. And joining the EU means following its rules.”

In a joint statement on Friday, the French and German foreign ministers said Poland has a legal and moral obligation to abide by EU rules. The country will continue to follow its obligations as a member of the bloc unless their interpretation or application violates the country’s constitution, Poland’s foreign ministry said separately.

The key question now is when the government will decide to publish the ruling in the official gazette, thus making it legally binding. After an October 2020 ruling that effectively banned abortion and sparked months of street protests, it waited on the publication until January.

“We’ll wait to see if there is a written decision that gets published and then we’ll analyse it,” Breton said. “It’s not granted it’ll be published.”

Britain is short of 100,000 truckers, leading to fuel and food supply worries
World
2 weeks ago
Next Article