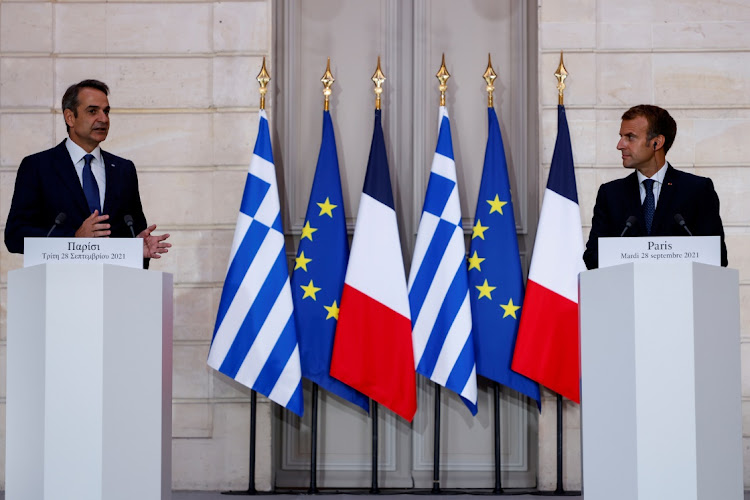 Greek Prime Minister Kyriakos Mitsotakis speaks as French President Emmanuel Macron listens on during a signing ceremony of a new defence deal at The Elysee Palace in Paris, France ON September 28 2021. Picture: LUDOVIC MARIN via REUTERS

Athens  — Greece on Thursday ratified a mutual defence pact with France that allows them to come to each other’s aid in the event of an attack from inside the Nato defence alliance.

All Nato allies are required to come to the aid of a member state that suffers aggression, but the decades-old tensions between Athens and Ankara are complicated by the fact that Turkey is also a member of the Atlantic alliance.

Greek Prime Minister Kyriakos Mitsotakis on Thursday hailed the agreement as “the cornerstone of an independent European defence policy”.

The strategic military and defence co-operation pact between the two Nato allies was clinched in September  and includes an order for three French frigates worth about €3bn. Athens had already ordered 24 Dassault-made Rafale fighter jets in 2021.

“For the first time it is clearly stipulated that there be military assistance in the event of a third party attacking one of the two states,” Mitsotakis told Greek MPs ahead of the parliamentary vote on Thursday to ratify the accord.

“And we all know who is threatening whom with a casus belli (cause for war) in the Mediterranean,” he added, in a clear reference to Turkey.

Greece and Turkey are currently at odds over the extent of their continental shelves and their maritime boundaries, a fact that has hindered any expansion by Athens of its territorial waters to 19km in the Aegean.

Turkey, which lies to Greece’s east, says such a move from Athens would be a casus belli. Some Greek islands lie less than 19km from Turkey’s western coast.

The Athens-Paris pact angered Ankara, which said in a statement on October 1, that Greece’s “maximalist maritime jurisdiction area and national airspace claims” were in contravention of international law and that it would strengthen Turkey’s determination to protect its rights in the region.

“Greece’s policy of armament as well as isolation and alienation of Turkey, instead of co-operation, is a problematic policy, which will threaten regional peace and stability and undermine not only itself but also the EU, which Greece is a member of,” Turkish foreign ministry spokesperson Tanju Bilgiç said.

French officials have been at pains to say that the deal did not target Turkey and that it was fully in line with Nato.

“This is not an agreement that is directed against Turkey or anyone else, it is an agreement that is in line with our common goal, Greece and France, to strengthen European sovereignty, including in the Eastern Mediterranean, where we have crucial interests,” a French presidential official told reporters in a briefing on September 28.

“So we would not understand if Turkey overreacts to an agreement that is not directed against them,” he said.

As well as the continental shelf issue, relations between Greece and Turkey have long been strained over other territorial issues in the Eastern Mediterranean, including air space, energy, the status of some Aegean Islands, and the ethnically split island of Cyprus.

The two countries relaunched exploratory contacts on their disputes earlier this year. Another round of bilateral discussions, which are informal, took place in Ankara on October 6. 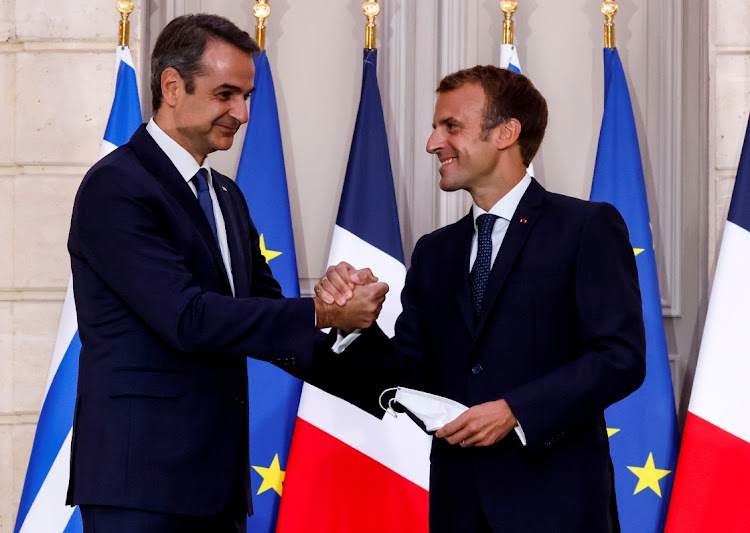