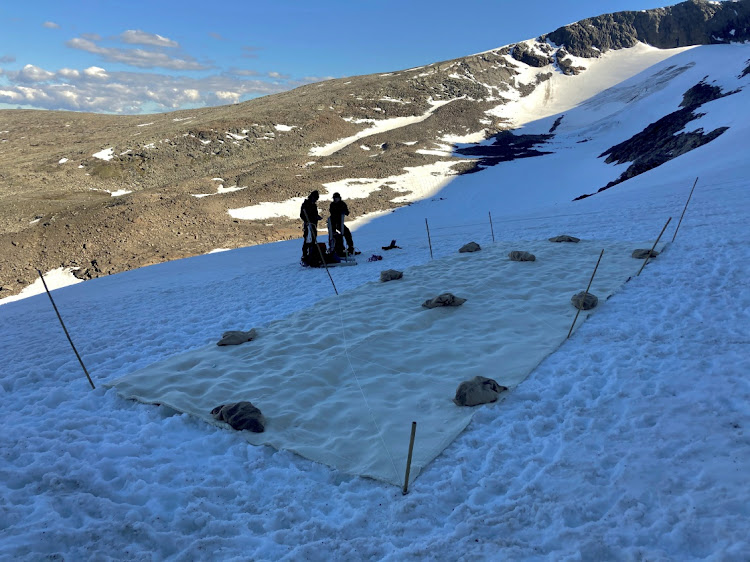 Stockholm — A cloth sheet used to shield part of the Helags glacier in northern Sweden over the summer saved at least 3.5m in height from melting, according to organisers of the private initiative, the first of its kind in Scandinavia.

Global warming is causing glaciers to shrink all over the world. For example, the glacier on Sweden’s highest mountain, Kebnekaise, has lost 2m in height over the past year alone.

The cloth experiment was performed on the Helags glacier, on Sweden’s highest mountain south of the Arctic Circle.

“We covered a small part of the glacier with a wool and cornstarch sheet just to see if we could get the snow and ice to melt a little less than normal,” co-instigator Erik Huss said.

Huss, a communications consultant with a degree in glaciology who had the idea along with Swedish adventurer Oskar Kihlborg, said glaciers were the best gauge of climate change.

“They show exactly how the climate is changing, and also what you can do to protect the environment,” he said.

Huss and his friends hope to reproduce their test on a larger scale than the 40m² covered on Helags, and to involve glaciology researchers for a more scientific approach.

They are also in talks with the cloth producer about trying to make the material thinner, and so less heavy.

That is key to scaling up, Huss said, because, as part of efforts to minimise carbon emissions from the project, the biodegradable cloth sheet is dragged up the mountain by hand.

Through the project, the initiators hope to raise awareness about the dangers many societies will face if the glaciers disappear.

“There’d then be no access to water for farming, for industry, for billions of people. Where do they go? From where do they get their water?

“There are billions around the globe who live alongside mountain ranges such as the Rocky Mountains, the Andes, the Alps and Himalaya ... who rely on the glaciers for water supply.”

Another aim is to show that hands-on action to mitigate the effect of global warming can have results. “It’s also about doing something,” Huss said.

Covering glaciers to save them from further shrinking has been tested elsewhere, such as in Italy’s Presena, but never before in a Nordic country.