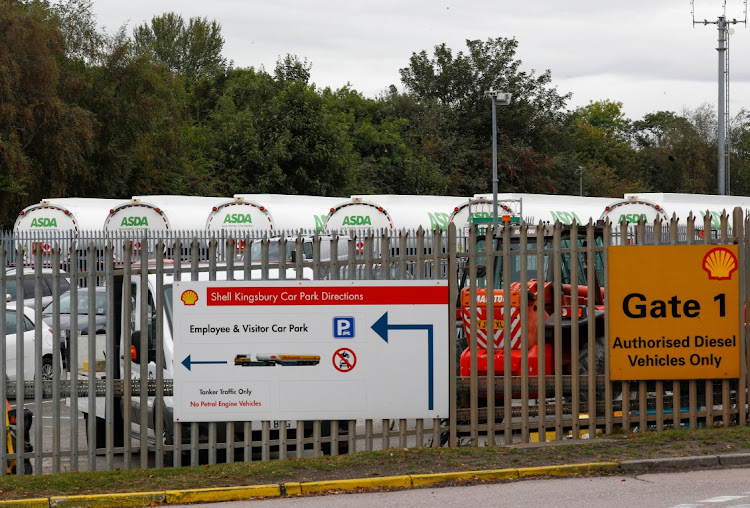 London — Petrol shortages are worsening in parts of the UK as more stations run dry after panic buying, as the government considers easing visa rules to attract truck drivers from Europe.

Britain is short of about 100,000 heavy goods vehicle drivers licensed to operate trucks, the Road Haulage Association has estimated.

To start plugging the gap, Prime Minister Boris Johnson’s government is considering issuing temporary visas for truckers. As many as 5,000 such visas were expected to be announced, according to newspaper reports.

Reports of shortages had a cascading effect as drivers rushed to fill their tanks. Some stations closed entirely, while others experienced shortages of one or more types of fuel, and waiting times increased. But stocks are ample in the country and there is no shortage of fuel, a government spokesperson said.

An estimated 1% of Britain’s 8,380 petrol stations are closed at the moment. Estimates on shortages vary for different suppliers and can change rapidly. The BBC reported that about 20 of BP’s petrol forecourts were closed, and 50 to 100 were short of at least one grade of fuel.

The crunch has coincided with an energy crisis in the UK caused by the surging price of natural gas and electricity. Several suppliers have already collapsed and millions of Britons face significantly higher bills heading into winter.

“We’re looking at temporary measures to avoid any immediate problems,” a Downing Street spokesperson said.  “But any measures we introduce will be very strictly time limited.”

Edmund King, president of the motoring association AA, told the BBC the effect of panic buying should subside quickly.

“Once people fill up, they won’t travel more than they would normally travel, so the strain on the system should ease up in the next few days,” said King, who was involved in emergency talks with the government.

As an example, one petrol station in Stockport, near Manchester, 28,000l of fuel on Friday, compared to 8,000l on the same day the previous week, according to the BBC.

A small number of Esso-branded pump stations have been affected in some way, a spokesperson for ExxonMobil said.

EG Group, owner of the Asda retail brand, will limit each customer to £30 on all grades of fuel — about a third of a tank on a typical car — because of unprecedented demand, it said.

At Tesco, there is “good availability of fuel, with deliveries arriving at our petrol filling stations across the UK every day”, the multinational retailer said.

Tesco, said last week the shortage of truck drivers would lead to panic-buying in the run-up to Christmas if action is not taken
World
10 months ago
Next Article