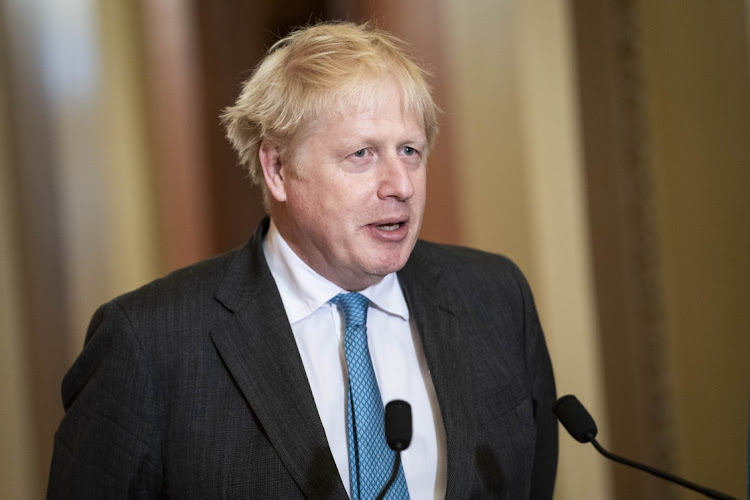 Boris Johnson, UK prime minister, speaks during a press conference with US House Speaker Nancy Pelosi, a Democrat from California, at the US Capitol in Washington on Wednesday, September 22 2021. Picture: BLOOMBERG/SARAH SILBIGER

UK Prime Minister Boris Johnson told France it’s time to get over its anger about being brushed aside as the US and Britain cut a deal to supply Australia with nuclear submarines.

He made the comments in a pooled television clip in Washington on Wednesday following a meeting with US President Joe Biden the previous evening. France certainly did come up in his 90-minute chat with Biden, Johnson added.

“I just think it’s time for some of our dearest friends around the world to prenez un grip about this and donnez-moi un break,” Johnson told reporters outside the Capitol building.

Paris reacted with fury to news of three-way defence pact last week, recalling its ambassadors in Washington and Canberra while dismissing the UK as a bit player, whose role as a “spare tyre” didn’t merit a diplomatic slap. As part of the deal, Australia cancelled a $66bn deal to purchase diesel-powered submarines from France.

On Wednesday, Johnson appeared to leave the door open for France or other nations to join the agreement, which aims to increase western influence in the Indo-Pacific region.

“It’s not exclusive,” Johnson said. “It’s not trying to shoulder anybody out. It’s not adversarial towards China, for instance.”

But his latest comments are unlikely to go down well in Paris, where President Emmanuel Macron is preparing to chat with Biden later on Wednesday. French officials say they were given no warning of the deal and have taken the lack of communication as a personal slight that they say is unworthy of an ally.

Johnson suffered his own disappointment after Biden indicated there’s no prospect of a bilateral trade deal between the UK and the US any time soon. Johnson had told British voters that a commercial agreement with the US would be one of the great prizes after Brexit.

“The Biden administration is not doing free trade deals around the world right now but I’ve got absolutely every confidence that a great deal is there to be done,” he said. “And there are plenty of people in that building behind me who certainly want a deal.”

Later on Wednesday, Reuters reported that Macron will next week return his ambassador back to the US after President Joe Biden agreed that consulting France before announcing a security pact with Australia could have prevented a diplomatic row.

Last week, France recalled its ambassadors from the US and Australia over the spat.

Macron and Biden had a phone call in which the two leaders agreed to launch in-depth consultations to rebuild trust, Macron's spokesperson said.

Macron and Biden will meet in Europe at the end of October.

The pledge was broadly welcomed, but critics say it does not address China's huge coal build at home
World
10 months ago
Next Article