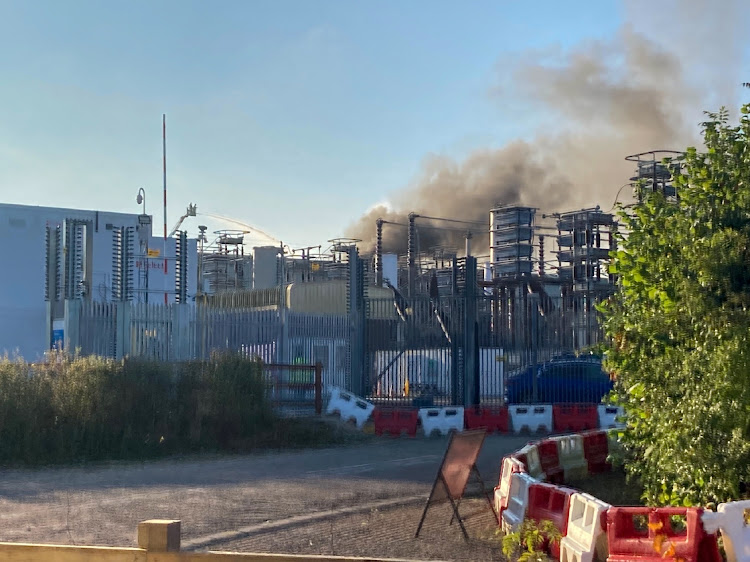 Smoke billows from a fire at the National Grid's IFA interconnector site in Sellindge, England, on Wednesday. The fire at the electricity converter station has shut down a cable that brings power from France to Britain. Picture: BLOOMBERG/EDWARD EVANS

London — UK business secretary Kwasi Kwarteng has warned the next few days will be challenging as the energy crisis deepens, and meat producers struggle with a crunch in carbon dioxide supplies.

“The next few days are going to be quite challenging,” Kwarteng said. “This is very serious.”

Gas prices are surging, unhedged electricity suppliers are at risk of failing and the usual mechanisms for protecting customers from the chaos are not working, meaning some sort of government bailout will be needed. Meat producers are warning they have just days of carbon dioxide supply left, threatening additional kinks in food supply chains that are already stretched.

Adding to pressure on energy prices, a cable that was knocked out last week after a fire at a converter station will not be back online for another month. National Grid said late on Monday that half the capacity of the IFA-1 UK-France line will come online on October 23, a month later than previously thought. Full capacity of 2,000MW is not expected until March 27.

Europe is facing a shortage of gas, after a longer and colder winter than usual, and Russia keeping a lid on supplies to the continent. Asia has also attracted liquefied cargoes of the fuel, keeping the market tight. In the UK, surging energy prices have caused five suppliers to go under in the past few weeks.

With higher prices continuing to squeeze suppliers, the government needs to ensure that there is not a cascade of bankruptcies that causes chaos in markets and to consumers, particularly the vulnerable.

The usual mechanism of handing a failed company’s customers to another firm is being tested this year as market prices mean it is not profitable for companies to come to the rescue.