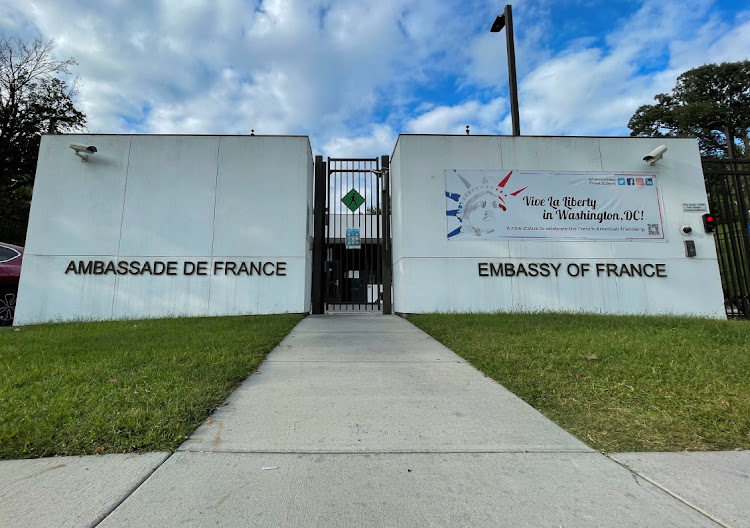 The French Embassy is seen after it was announced France decided to recall its ambassadors in the US and Australia for consultations after Australia struck a deal with the US and Britain which ended a French-designed submarine deal, in Washington, US, on September 17 2021. Picture: REUTERS/GERSHON PEAKS

Emmanuel Macron is making it clear that French fury isn’t ebbing after Australia cancelled a $66bn submarine order in favour of a new defence pact with the US and Britain.

After the deal was announced on Wednesday, the French president recalled ambassadors to Washington and Canberra and cancelled events, a symbolic gesture rare among such close allies. French officials say Macron is looking for an adequate response, and they’ve been renewing his calls for Europe to boost its own defence capabilities.

Macron’s public reaction is partly directed at a domestic audience. Seven months before a presidential election, his main rival, the nationalist Marine Le Pen, is closing in according to some polls. He wants to show voters he’s tough. But allies are likely to soon call time on the outrage.

US President Joe Biden reached out to speak to Macron by phone in the coming days. British Prime Minister Boris Johnson appeared to simply brush it all off, saying on Thursday that relations with France were “rock solid” while Australia’s Scott Morrison doesn’t seem in any mood to make amends.

Once the dust settles, Macron could seek to obtain concessions  — such as loosening Covid-19 restrictions on travel to the US or boosting American aid in Africa’s Western Sahel region where French soldiers are fighting Islamist extremists.

“Now that the US has gotten the message and has just made a first (small) gesture, we should defend our interests,” Paris-based researcher and Sciences Po teacher Antoine Bondaz said on Twitter, suggesting France could seek other ways to co-operate with allies in the region.

But the reality is that once anger turns to acceptance, Macron has limited backing for any meaningful response from the rest of Europe.

His ideas on reducing European reliance on US and Nato aren’t new — he once called the alliance “ brain dead” — and may not get much traction. Leaders in Eastern Europe and the Baltics are sceptical of any move that would reduce the American presence in a region where they feel threatened by Russia. Germany is nearing an election and coalition talks that might go into next year.

What’s irked the French is that they weren’t informed the submarine deal was being hatched, according to the officials.

Before leaving Canberra, ambassador Jean-Pierre Thebault said the Australian defence minister only contacted his French counterpart after the deal was reported by media outlets, adding there were “no warnings” during the 18 months that the plan was being hammered out.  France had been “stabbed in the back.”

The French are also angry they weren’t asked to be part of the expanded US-Australia-UK strategic partnership.

France has important interests in the Pacific and Indian oceans, with some 2-million citizens and thousands of soldiers spread across several French islands, including New Caledonia and Reunion. Like the US and Australia, it’s wary of an emboldened China and has always seen itself as a key player in the region.

Mixed up with all that is dismay over a significant economic loss — in signing the deal for the nuclear-powered submarines, the Australian government dumped a contract with Paris to build 12 French diesel-powered submarines.

Morrison told reporters on Sunday that the decision to cancel the French contract was made on “sovereign, national defence interests” and that France was aware of Australia’s concerns on the capability of submarines. The break-up fee could cost Australian taxpayers up to A$400m ($290m ), according to the Financial Review.

The EU is Australia’s third-largest trading partner,  with the total trade in goods accounting for €36bn ($42bn ) last year 2020, according to the Commission. If Macron really wanted to make waves, he could try to block a pact being negotiated by the EU that could increase exports to Australia by up to a third.

Junior Europe minister and key Macron ally, Clement Beaune, alluded to that possibility when he told the France 24 news channel that France feels it can no longer trust Australia “and that could put in question other negotiations with the country.”

But, says Bruno Tertrais, deputy director of the Foundation for Strategic Research in Paris, “the most likely scenario is limited responses and an inevitable adaptation of France’s Indo-Pacific strategy.”

French foreign minister Jean-Yves Le Drian will meet his Indian counterpart at the UN General Assembly this week to discuss just that. On Friday, the two ministers had a phone conversation in which they agreed to deepen their strategic partnership, based on “political trust,” according to a French foreign ministry statement.

And even while it remains in Nato, France can still make life more difficult for members, one French official said, speaking on condition of anonymity and declining to elaborate.

The official said the submarine deal shows the UK can’t be trusted either while Beaune accused Britain of returning to the “American lap.”

That means that ongoing Brexit negotiations over issues including fishing rights and market access for finance, as well as regulatory disputes over goods entering the Republic of Ireland could become a lot more tense.

The missile is believed to be a variant of the country's Hyunmoo-2B ballistic missile, with a flight range of about 500km
World
8 months ago
Next Article