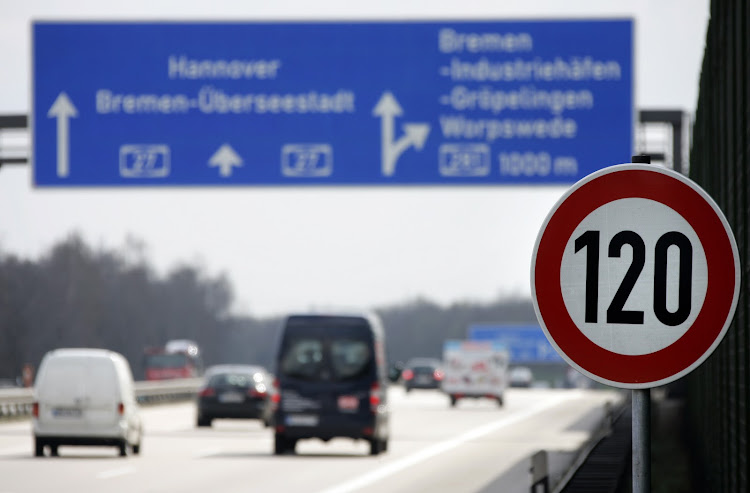 Germans are not yet ready to relinquish their need for speed. Picture: REUTERS

Could Germans’ cherished right to drive as fast as they like on the Autobahn soon be outlawed? With the country’s centre-left Social Democrats now leading the polls ahead of September’s federal election, we shouldn’t rule it out: If voted in, they promise to limit motorway speeds to a maximum of 130km/h. Possible coalition partners, the Greens and Left party, also want a highway speed cap.1

For libertarians and petrol-heads, not to mention the German engineers who spent decades building ever more powerful combustion engines, this would be hugely disappointing.

I enjoy my Autobahn freedoms as much as the next German, but faced with a worsening climate crisis, high speeds are becoming harder to defend. Motorway speed limits can lower fuel consumption and thereby cut pollution, including planet-heating emissions.

This doesn’t just apply to road users. The shipping industry has been able to improve emissions just by sailing more slowly. Meanwhile, the EU hopes higher aviation fuel taxes will encourage us to ditch planes for slower, greener trains. Although slower travel is no panacea, it does offer a quick environmental win, whereas full adoption of clean technology will take years.

To encourage the switch away from fossil fuels, governments should consider forcing polluting vehicles to slow down more, and cut cleaner vehicles some slack on speed.

It may not be a popular message, but we’ve known for decades that slowing down can reduce pollution. When cars go above a certain speed — roughly 90km/h depending on the vehicle type — fuel economy drops, in part due to increasing air resistance.

The US introduced a 90km/h freeway speed limit in the 1970s when oil prices surged, though the act was repealed two decades later. More recently, the Netherlands switched to a 100km/h daytime motorway speed limit to help cut nitrogen oxide emissions, while England lowered the speed limit from 70mph (112km/h) to 60mph (96km/h) on several motorways for similar air quality reasons.

A 130km/h Autobann speed limit would lower greenhouse gas emissions by 1.9-million tonnes annually, according to the German Environment Agency. That’s barely 1% of Germany’s overall transport emissions, but nearly 5% of the total produced by cars and light commercial vehicles on highways, it estimates. A 120km/h speed limit would remove even more.

The benefits of slowing down are significant in shipping due to the non-linear relationship between a vessel’s speed and fuel consumption. A 10% speed reduction results in 27% less energy use (or 19% after accounting for the additional time to complete the voyage).

Pioneered more than a decade ago by AP Moller-Maersk, the world’s largest container shipping line, in response to soaring bunker fuel prices and overcapacity, the so-called “slow-steaming” approach is still widely used across the industry, even though freight rates are much higher. Slower speeds are estimated to have lowered the emissions intensity of container shipping by 35% between 2007 and 2016.4

Although calls from some maritime leaders for mandatory speed limits failed to gain traction, more onerous international environmental regulations that come into force from 2023 may force some shipping companies to slow down, executives have said. But because there’s a limit to how much further speeds can effectively be reduced, the pressure’s now on deploying cleaner technology and alternative fuels.

Technology has accelerated so many other parts of our lives, making transport’s sluggish speeds feel dispiriting. The pandemic has only compounded such frustrations. People shunned crowded public transport and turned back to cars, creating more congestion, and the world’s ports became blocked due to cascading supply chain issues. (Some ships have sped up a little to make up the lost time, though it hasn’t helped much.)

Haste and human happiness aren’t always correlated though, a realisation that’s prompting more European cities to impose far stricter driving speed limits in urban areas. In Paris a near-blanket 30km/h limit came into force last week. Though any emissions benefits from Paris’s plan are less clear-cut2, it hopes to make streets safer and more liveable for pedestrians and cyclists. Walking or riding a bike is also better for our health.

Slower forms of travel can be enjoyable too. For me, gazing out of a train window beats the indignities of airport security and a cramped seat in the back of a plane (though I’ll admit the appeal of the train dining car and quiet carriage diminishes with an impatient toddler in tow).

And yet speed freaks shouldn’t fret. Advanced electric cars can accelerate from 0-60mph in under three seconds (though driving them at very high speeds for long periods can drain the battery faster). China and Europe are investing heavily in high-speed railways, an area where regrettably the US still lags. E-bikes and electric scooters are also gaining in popularity. And judging by the number of electric flying taxis companies listing shares this year, emission-free heli-commuting will be possible soon too. Even new supersonic aircraft like those touted by Boom Technology might arrive one day, assuming we can find a way to produce enough sustainable or synthetic fuel.

Could we use our need for speed to incentivise cleaner choices? Austria exempts electric vehicle drivers from some more onerous highway speed limits. Allowing EV drivers to use carpool lanes, as is common in several US states, is a similar tactic.5 Seeing cyclists zip past in dedicated cycle lanes, might just tempt car drivers stuck in traffic jams to make the switch for a faster lane.

Once we’re all driving zero-tailpipe-emission vehicles, the grid is 100% clean and driving is even more automated and safe, perhaps then highway speed limits could go up again, as the UK’s transport minister has suggested.

For now, we have to slow down. But the clean energy revolution will help us race ahead again.

1. It's not clear what will happen in practice because the Christian Democrats and business-friendly Free Democrats are opposed to an Autobahn speed limit. Various coalition permutations are possible.

2. According to this study.

4. Engines aren’t optimised to travel at such slow speeds. Speed limits may though reduce unnecessary acceleration and braking by ensuring traffic moves at a more consistent speed. Speed restrictions may also persuade some drivers to leave their cars at home.

5. One counterargument is fairness: electric vehicles are often quite expensive.

Tesla’s German buyers are not happy with its poor service

Tesla’s German buyers are not happy with its poor service