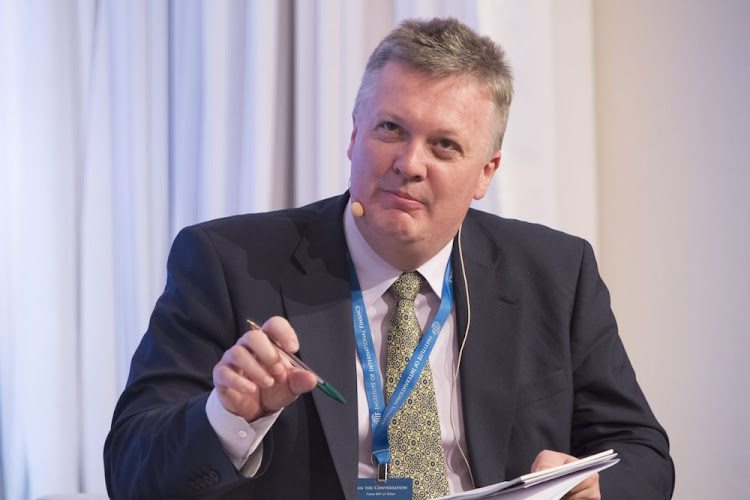 The Bank of England (BoE) named Huw Pill, a former Goldman Sachs analyst who now works at Harvard Business School, to succeed Andy Haldane as its next chief economist.

Pill, who has previous monetary institution experience from a host of roles at the European Central Bank (ECB), will start in his new job on September 6, the BoE said.

He last worked at Threadneedle Street in the early 1990s, starting his career around the same time as the previous two chief economists — Spencer Dale and Haldane, the latter of whom left that job in June.

Pill, 53, rejoins the BoE at a time when monetary policy committee (MPC) officials are signalling the possible need for modest tightening as the economy recovers and inflation accelerates beyond their 2% target.

“My feeling is, he would be on the hawkish end of the current MPC,” said economist Tony Yates, a former BoE official. “He has relatively traditional views about what central banks should be helping out with. He’d be up for tighter policy than your median policymaker.”

The appointment marks a setback in governor Andrew Bailey’s push for diversity at the Bank, this role being the only one on the MPC that he gets to appoint himself. All but one of the institution’s top echelon is male and only two of the nine-member rate-setting panel are women.

“So much for diversity,” said Danny Blanchflower, who served on the MPC from 2006 to 2009. “Why another middle-aged white guy?”

The choice of Pill marks a continuation in the BoE’s experience of Goldman Sachs alumni serving as senior officials. Bailey’s predecessor, Mark Carney, formerly worked at the US financial institution, as did deputy governor Ben Broadbent.

It also defines the BoE’s rate-setting panel as one of the most investment-bank heavy of the advanced world. Aside from Broadbent and Pill, two other members — Michael Saunders and the newly appointed Catherine Mann — both worked for Citigroup.

One strength Pill brings is his experience of managing research economics at a major monetary institution. He worked for several years at the ECB in Frankfurt, culminating in a stint as its deputy director-general for research.

“As an ex-BoE employee, his first interest will be creating the right environment for bank staff so that they can contribute the best macroeconomic research,” said James Nixon, a former Bank and ECB official who is an economist at Oxford Economics and knows Pill personally. “He’s a jovial and forceful personality — not a shrinking violet by any stretch of the imagination.”

Pill would have been one of the ECB’s most senior British officials, a pedigree that may make him stand out in a public environment in the UK where any prior association with the EU risks carrying a political stigma.

His appointment comes at a critical juncture in monetary policy. The BoE predicts inflation will reach 4% by the end of the year — double its target — though officials view the pickup as temporary. In July, however,  they signalled that some stimulus withdrawal will be needed in order to put consumer prices back on course.

In the aftermath of the Brexit referendum in 2016, Pill, then at Goldman Sachs, suggested the central bank would prioritise supporting the economy over worrying about inflation.

The BoE “wouldn’t be deterred in keeping the support for the economy in place through lower interest rates, more asset purchases and other measures”, he said.

The previous incumbent, Haldane, reshaped his role to explore ideas beyond conventional monetary policy ranging from inequality to automation, an approach that won him plaudits and increased his profile but also attracted controversy. Pill’s prior comments suggest he could favour a narrower approach.

“Central bankers claiming the prerogative of independence over broader issues and mandates do so at their own peril,” he wrote in 2016. “Creating and institutionalising a new social contract between central banks and society more appropriate to today is necessary if the hard-won traditional benefits of central bank independence are to be preserved.”

Pill returned to the subject of mandates in 2019, writing one among a collection of open letters to the BoE governor compiled by the National Institute for Economic and Social Research. He said there was a need for “mandates to ‘catch up’ with practice, particularly insofar as they relate to the interactions between monetary and fiscal affairs”.

In the article, Pill argued for the need to introduce “defensible limits” on quasi-fiscal balance sheet measures by central banks so as to maintain credibility and independence.

“The time has come to review the Bank’s mandate and assess whether it remains fit for purpose,” he added.

The S&P 500 rose during the much-anticipated address to stand more than 0.6% higher from opening levels
Markets
3 weeks ago

Central banks are stepping in on critical issues of the day

Central bank officials now concern themselves with a wide array of policy issues, from racial justice to inequality, from education to public health
Opinion
1 month ago
Next Article

Bank of England sets out plans to wean economy off stimulus

Bank of England sets out plans to wean economy off stimulus