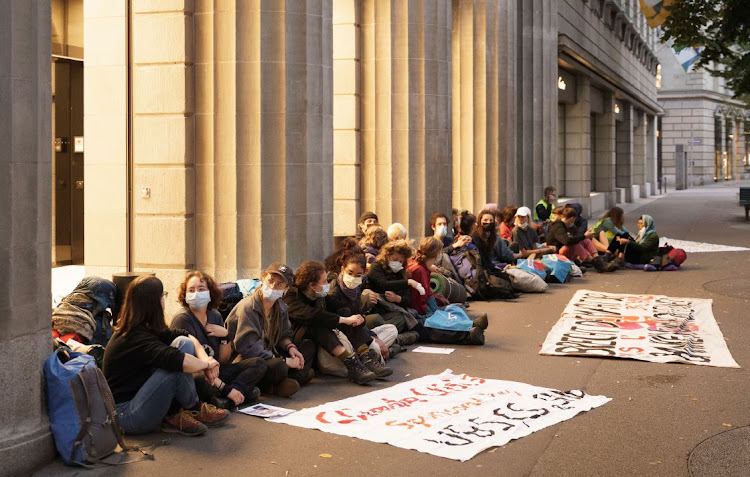 Climate activists of ‘Rise up for Change’ block an entrance of UBS to protest against big banks’ financing of fossil fuel projects that damage the environment in Zurich on August 2 2021. Picture: SCHWEIZ RISE UP FOR CHANGE/HANDOUT VIA REUTERS

Zurich — Police cleared climate activists from the heart of Zurich’s financial district on Monday after dozens blocked entrances to offices of Switzerland’s two biggest banks to protest against their financing of fossil fuel projects, authorities said.

Police in Switzerland’s financial hub said they had taken about 30 people into temporary custody during the peaceful protest that was still under way around midday.

Police led or carried away singing and chanting activists who had taken up positions at the entrances to the headquarters of Credit Suisse and a big UBS office block on Paradeplatz square in central Zurich after they refused to disperse.

Credit Suisse and UBS have so far failed to respond adequately to the climate crisis, Frida Kohlmann, spokesperson for the Rise Up for Change group, said in a statement. “That is why the climate justice movement is occupying the Credit Suisse headquarters and the nearby UBS office to draw attention to the consequences of the Swiss financial institutions’ inaction.”

In response UBS said in a statement: “Climate protection is a top priority at UBS ... We are committed to reducing greenhouse gas emissions across our business to net zero by 2050, with science-based interim targets for 2025, 2030 and 2035.”

Credit Suisse had no comment on the protest, but said: “Credit Suisse is committed to climate protection and achieving the goals of the Paris Climate Agreement,” referring to the 2015 international treaty on cutting greenhouse gas emissions.

The protest comes amid a wave of civil disobedience by activists in Switzerland, where the climate is warming at about twice the pace of the global average and changing its famed mountain landscapes.