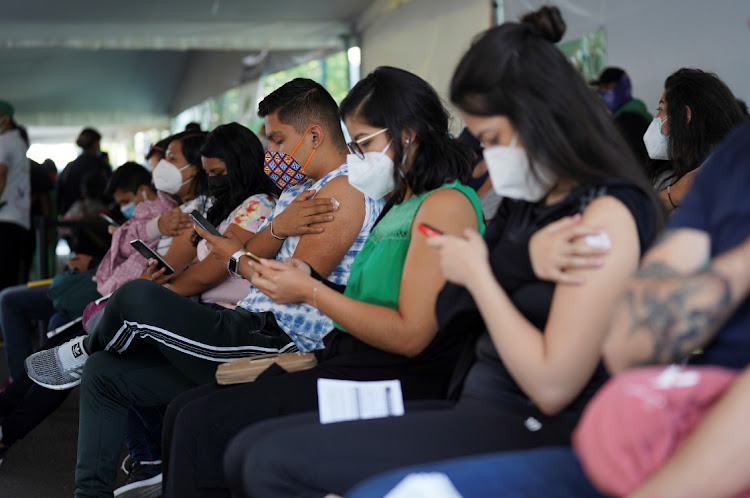 People between the ages of 18 and 29 years sit after receiving a dose of the Sputnik V coronavirus disease vaccine, in Mexico City, Mexico, in this July 27 2021 file photo. Picture: REUTERS/TOYA SARNO JORDAN

The Kremlin’s ambitions to win soft-power dividends around the world from Russia’s Covid-19 vaccine are being hampered by delays in delivering Sputnik V to foreign buyers clamouring for supplies.

This week, Guatemalan President Alejandro Giammattei said his country will seek to replace 8-million planned doses with supplies from other producers by end of the year after delays receiving its initial order.

Countries that embraced Sputnik amid a global rush to secure vaccines are increasingly reporting supply problems with the second component in the two-shot inoculation. In Argentina, a presidential adviser said the shortages put the government at risk as people were unable to receive the second dose within the recommended period of three months after the first.

President Vladimir Putin has touted Sputnik to leaders around the world as part of an ambitious Kremlin drive to put Russia on the map as a major player in the international vaccine business. But difficulties producing the promised shots could relegate it to a secondary-role as rivals from the US, Europe and China fill the gap.

“The developers designed their export plans around local production that vastly overestimated local capacity,” said Samuel Ramani, a tutor of politics and international relations at Oxford University. “Russia has lost its head start as supplies from other countries became more available and now it’s looking like an also-ran.”

A spokesperson for the Russian Direct Investment Fund (RDIF), the sovereign wealth fund that is responsible for Sputnik V’s international marketing, said the existing contract with Guatemala was adjusted to a new delivery schedule and not cancelled.

“Given the unprecedented worldwide demand all vaccine producers are experiencing some short-term supply issues,” the RDIF representative said.

The fund declined to comment on whether it still aims to provide the inoculation to 700-million people outside Russia this year as its chief pledged in March. Airfinity, a London-based science analytics company, estimates 99-million doses have been delivered to date, with more than half of them for domestic use.

Kremlin spokesperson Dmitry Peskov last week said delays in international Sputnik supplies were a result of the need to ramp up domestic vaccination as cases surged.

Putin hailed Sputnik as the first Covid-19 vaccine approved for use, a move criticised at the time as premature. However, it overcame initial questions about its effectiveness that emerged due to a lack of data, proving itself to be broadly on par with vaccines developed by Western giants.

Unlike other Covid-19 vaccines, Sputnik’s two shots are different. Production of the second has proved hard to scale up, according to buyers.

Supply delays for the second dose have slowed Sputnik V’s rollout in India, according to Erez Israeli, CEO of Dr Reddy’s Laboratories, which is licensed to distribute the inoculation in that country. Indian producers have agreements to make as many as 850-million doses a year, though it is not clear when production will reach that level.

In Argentina, a letter leaked last week exposed the government’s frustration with slow Sputnik V supplies. On Wednesday, it announced an agreement with Pfizer for 20-million doses by year-end. Mexico has also reported delays.

In Brazil, governors from northeastern states who are trying to bring the vaccine said that 1.1-million doses that were expected for Wednesday were delayed by Russia, according to O Globo newspaper. Both parties are discussing a new schedule for the delivery, the paper said.

A shipment of 50,000 doses of the second component arrived in the Philippines this month several weeks after reports that people scheduled to receive the follow-up shot were facing delays.

Amid the holdups, RDIF said earlier this month the gap between shots can be safely extended to 180 days.

As Russia struggles to fulfil its commitments, secretary of state Antony Blinken said on Tuesday the US delivered 1.5-million doses of the Moderna vaccine to Tajikistan, a former Soviet republic that Russia considers its strategic backyard. The announcement came as Russian defence minister Sergei Shoigu arrived in the capital of Dushanbe for talks.

Still, in Russia Sputnik V is presented as a success, helping extend its soft power and provide a quality, cost-effective alternative to vaccines produced in the West. Sputnik V has been approved for use in 69 countries and RDIF said last month it has deals to produce 1.6-billion doses this year.

“Sputnik V is a domestic propaganda victory,” said Vasily Vlassov, an epidemiologist at Moscow’s Higher School of Economics. “In the government and media, they dwell on its success getting approved in so many countries rather than the inconvenient details.”

The problem is not the country’s vaccines, which have been available since late 2020: rather, it’s the devastatingly slow pace of inoculation
Opinion
3 months ago

The province has set aside more than R2bn for procurement, but needs government and regulatory approval
National
3 months ago

By June 2, only 18-million Russians — an eighth of the population — had received at least one dose of vaccine, despite them being available even in ...
World
3 months ago
Next Article