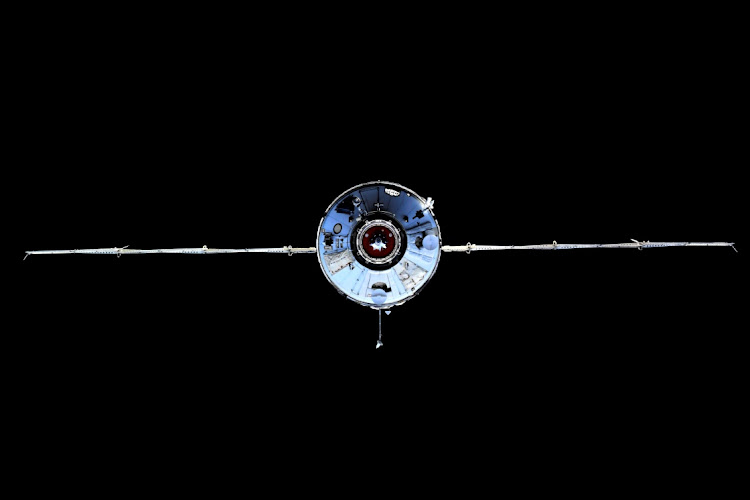 The Nauka (Science) Multipurpose Laboratory Module is seen during its docking to the International Space Station (ISS) on July 29, 2021. Picture: OLEG NOVITSKIY/ROSCOSMOS/REUTERS

Moscow — Russia said on Friday that all was well with the International Space Station and its seven-member crew after its newly-docked Nauka research module briefly threw the ISS out of control a day earlier.

Thursday's mishap began about three hours after the Nauka module, named after the Russian word for 'science', had latched onto the space station, as mission controllers in Moscow were performing post-docking “reconfiguration” procedures, according to Nasa .

Nauka's jet thrusters inadvertently fired, causing the station to pitch out of position 250-miles (402-kilometres) above the Earth, leading the mission's flight director to declare a “spacecraft emergency,” US space agency officials said.

The crew — two Russian cosmonauts, three Nasa astronauts, a Japanese astronaut and a European space agency astronaut from France — were never in any immediate danger, according to Nasa and Russia.

Russian cosmonaut Oleg Novitskiy told his followers on Twitter not to worry.

“Dear friends, I’m reading your numerous comments. Don’t worry! Our work at the International Space Station to integrate the newly arrived Nauka module continues! Tonight we are going to open the hatches. Will keep you posted!”

On Friday, Roscosmos, Russia's space agency, said work to integrate Nauka with the ISS was under way and Russian cosmonauts would later open the module's hatch to try to access it.

It said checks on Nauka's engines were being completed remotely by Russian specialists to ensure everyone's safety, that the ISS was on its normal flight trajectory, and that the docking had been successful in so far as the seal between the new module and the rest of the ISS was hermetic.

It did not say what had prompted Nauka's engines to unexpectedly roar into life.

Dmitry Rogozin, head of Roscosmos, retweeted Novitskiy . He had hailed Nauka's docking with the ISS as “a very difficult and important victory for us” and warmly accepted congratulations on Twitter from space entrepreneur Elon Musk.

Rogozin also spoke of plans to launch another Russian module to the ISS in November.

Roscosmos has suffered a series of mishaps and corruption scandals, including during the construction of the Vostochny Cosmodrome in the country's far east where contractors were accused of embezzling state funds.

A startling exposé by ProPublica shows how America’s richest 25 people use canny financial tricks to pay little or no income tax – even as their real ...
Opinion
1 year ago

Bezos’s space company Blue Origin has auctioned off a seat aboard its New Shepard rocket and an as-yet-unidentified winner paid $28m, plus ...
Opinion
1 year ago

Roscosmos chief says there are enough rockets, but nothing to launch
World
1 year ago

The space venture founded by Amazon.com billionaire Jeff Bezos is publicly auctioning off a seat
Life
1 year ago
Next Article