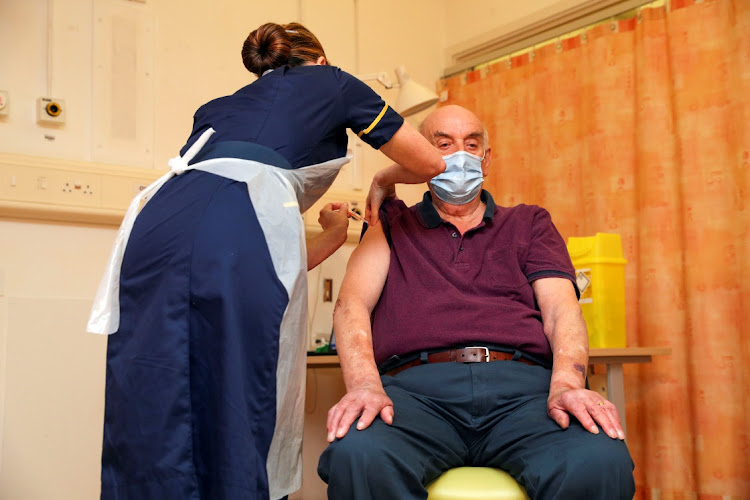 London —A sustained fall in new coronavirus cases in the UK is being cautiously welcomed by scientists, though there is no consensus on what is behind it, or whether the current wave of infections has peaked.

The UK recorded 24,950 new cases on Monday, down for a sixth day and well below the 39,950 from a week earlier. Scientists pointed to the end of the football European Championship, a period of sunny weather and the start of the school holidays as potential factors, alongside the vaccine rollout.

The data is a boost for Prime Minister Boris Johnson, who has been fending off criticism over his decision to lift restrictions at the same time that the highly transmissible Delta Covid-19 variant was taking hold.

Given there is still uncertainty over whether the trend will continue, the government is not yet celebrating, with Johnson’s spokesperson  telling reporters  the premier “doesn’t think we are out of the woods yet”.

“We have to be very careful,” policing minister Kit Malthouse said on Tuesday. “We’re waiting to see what happens over the next few days.”

The final stage of lifting curbs in England on July 19 saw nightclubs reopen, festivals back with unlimited crowds and the end of mandatory mask wearing. The government warned the infection data do not yet account for that.

“It will not be until about next Friday before the data includes the impact of this change,” Paul Hunter, professor of medicine at the University of East Anglia, said. Still, the figures are “looking good for at least the summer”, he said.

The improvement was unexpected. Last month, health secretary Sajid Javid warned infection rates could rocket to 100,000 new cases a day. But he said it was right to go ahead with reopening because vaccinations had “severely weakened” the link between infection and hospitalisations and deaths.

“The recent fall in cases in England is great news, but also puzzling given that progressive relaxation of restrictions has occurred, with the final release of all measures last week,” said Stephen Griffin, associate professor at the University of Leeds School of Medicine.

Potential factors include “a great many people” choosing to self-isolate in recent weeks after coming into contact with a case, he said, and the large number of students being sent home due to a confirmed case in their class “bubbles”. Many schools also began the summer holidays last week.

“We have also had weather that would promote more outdoor and less indoor mixing, which again might curb spread,” Griffin said. Still, he warned it is still “very much a waiting game” to see how these factors “interact over the summer and translate to new infection”.

Another theory is that the European Championship in June and July drove a short-lived Covid-19 surge in the UK Football crowds not only packed into Wembley but in town squares across the country, and in pubs and homes as the England team reached the final. Case numbers in Scotland started falling earlier than in England, prompting suggestions this was down to that team’s early exit from the contest.

The decline in cases in Scotland now looks like a “longer-term trend”, said Mark Woolhouse, professor of infectious disease epidemiology at the University of Edinburgh. He told the BBC there was no sign of cases picking up since the tournament ended.

There are “multiple factors at play” in the drop in cases, according to Adam Finn, a professor of paediatrics at Bristol University, including “infection-induced immunity, vaccine-induced immunity and, critically, behaviour.”

Nine in 10 people across the UK are now likely to have Covid-19 antibodies, according to the office for national statistics, either because they have had the virus in the past or been vaccinated against it.

Just over 70% of UK adults have had the two vaccine doses needed for maximum protection, and 88% have had one. “With every passing day another cohort of people, recently immunised, is added to our protection alongside those who have recently had the infection, survived and recovered,” said Finn.

Even so, the race is on to get more adults vaccinated, amid fears within government that not enough young people are coming forward. “Recent weeks have seen a real drop in the number of first vaccinations,” said James Naismith, director of the Rosalind Franklin Institute at the University of Oxford.

All eyes will be on the office for national statistics infection study, released every Friday, to see if that data backs up the fall in new daily case numbers. For Naismith, it is the one released on August 21 that will be the next milestone, when “we will know for sure the effect of the end of the lockdown”.

The lag between infections and serious illness means hospitalisations are likely to rise over at least the next few days, even if cases continue to fall. According to the latest daily data, 917 people were admitted to UK hospitals last Tuesday.

Modelling from government scientists released this month warned that 1,000-2,000 people could be admitted to hospitals every day at the expected peak of the current wave in August, with 100-200 deaths a day. There is now growing hope this will not come to pass.