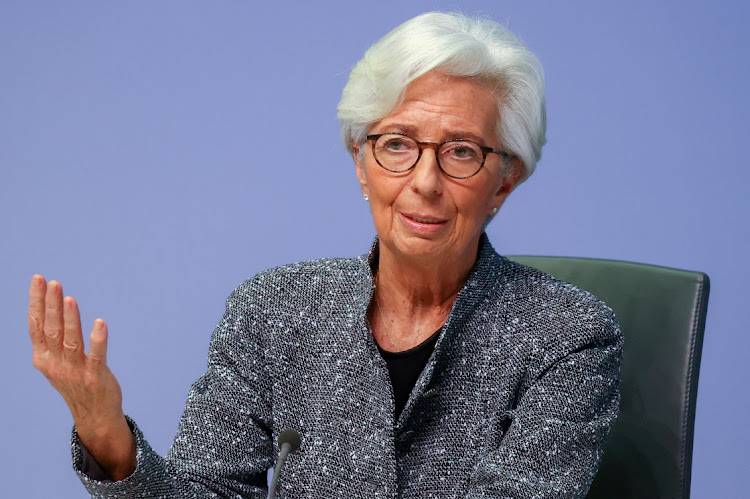 The European Central Bank (ECB) revised its guidance on when interest rates might rise to convince investors it won’t withdraw support too hastily and derail the economic recovery.

The move is aimed at strengthening the ECB’s long-running efforts to push up inflation, but it also means policymakers won’t necessarily react immediately if price growth overshoots their target for a period.

Not all policymakers were on board with the decision, which followed an 18-month strategy review in which the ECB raised its inflation goal to 2% from just-under 2%. Speaking after Thursday’s announcement, president Christine Lagarde said backing for the change in guidance wasn’t unanimous, though there was an “overwhelming majority” behind it.

The key change to the guidance means that even if inflation is at the target at the end of the ECB’s three-year forecast horizon, officials won’t be forced to respond with tighter policy. The ECB currently foresees price growth averaging just 1.4% in 2023, which suggests any rate hike is years away.

Markets were little changed, with only around 5 basis points of hikes priced in by mid-2023 and about 10 basis points a year later.

The ECB’s promise of continued ultra-loose policy sets it apart from some of the world’s biggest central banks. In the US, where inflation is running above 5%, Federal Reserve officials are already discussing when to start tapering their stimulus. Some policymakers at the Bank of England have said a reduction in bond buying should be considered soon.

On the economic backdrop, Lagarde said the Covid-19 pandemic “continues to cast a shadow” and there is a long way to go on the road to recovery.

“Inflation has picked up thought this increase is expected to be mostly transitory,” she said. “We need to preserve favourable financing conditions” because “this is essential for the current rebound to turn into a lasting expansion”.

The strategy review, the first in 18 years, addressed the ECB’s decade-long struggle to stoke price growth in the eurozone, as well as topics such as climate change, inequality and digitisation. It concluded that when interest rates are almost as low as they can effectively go — as now — policy needs to be “especially forceful or persistent”.

Still, the review comes just as the currency bloc and much of the rest of the world are hit by accelerating inflation, driven by booming demand and constrained supply as coronavirus restrictions are withdrawn. While the ECB predicts eurozone price growth will fall back below target in 2022 as the economy rebalances, some policymakers have signalled concern that inflation expectations may become entrenched at too high a level.

The governing council will face some key decisions after the summer, when it’ll have to start considering how and when to wind down the pandemic purchase programme and what should replace it. Lagarde said the ECB’s new forecasts at its September meeting will “certainly have an impact on what we do”.

That debate could be complicated by the spread of the Delta variant of the coronavirus. Cases are on the rise in countries including the Netherlands and Spain, raising the risk of new travel curbs that would hit the bloc’s tourism-dependent south hardest.

In biggest overhaul in policy since 2003, European Central Bank sets inflation target at 2% and will include climate change considerations in its ...
World
4 months ago

Those failing to launch digital currencies could be left behind in terms of cross-border payments, ECB warns
Opinion
5 months ago