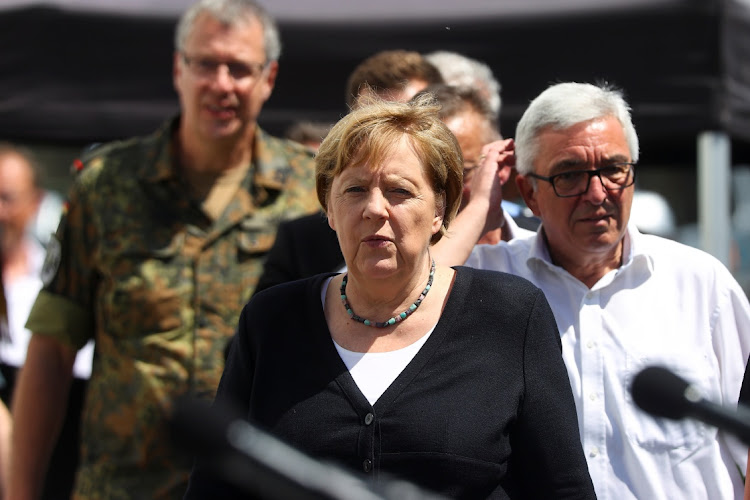 Berlin — There she was again, the proverbial mother of the nation, walking sombrely through the rubble and mud of a nearly destroyed town called Schuld, which happens to be German for “guilt”.

German Chancellor Angela Merkel, two months before an election that will usher her out of politics and into retirement, has done her best to stay aloof from the campaign to succeed her. But the natural disaster that struck her country last week left her no choice but to wade in.

The regions along the Rhine and its tributaries have not seen flooding on this scale in centuries. As the death toll in Germany and Belgium creeps towards 200, with many victims still missing, the torrents seem to some residents like the beginning of a medieval morality play. Is the story of Schuld, like that in Genesis 6-9, one of God punishing humanity for polluting His creation?

So far, Germans, like many other people in rich countries, have thought about climate change in largely abstract terms, as afflicting mainly poor places such as Bangladesh and Burundi, or threatening exotic islands such as the Maldives. But now — and sooner than I recall even the scientists predicting — the whole world seems to be out of whack, even prosperous spots such as Germany.

When northern reaches such as Siberia, Finland and the Pacific Northwest swelter under heat domes or burn in purgatory-like fires; when well-built split-timber houses in the Rhineland are swept from their foundations while people are sleeping in them, it is time to revisit old assumptions.

One political effect of these disasters is to turn something abstract — the greenhouse effect and global warming — into something concrete: individual human suffering that also stands as a moral indictment of our societies. Not far from Schuld, for example, a flash flood washed through a care home for disabled people, drowning 12 of them.

Another effect is to move public debate beyond the hairsplitting that followed previous cataclysms — whether this is about the climate or merely the weather, about a mega-trend or just an event. Technically, no individual calamity can be blamed on man-made greenhouse gases. Yet the science is so clear about how global warming is causing these catastrophes to proliferate. The pedants no longer have a leg to stand on.

The immediate electoral implications are less clear. It used to be a rule of thumb that any natural disaster was also an opportunity for incumbent politicians to show their empathy and competence, and thus to score points.

After a flood in 2002, for example, Merkel’s predecessor, Gerhard Schroeder, waded in rubber boots through the mud to shake hands, a gesture that helped him win re-election that year. Merkel did something similar after flooding in 2013, just before that year’s election. So the candidates of the three parties leading in the German polls also dropped everything to tour the flood zones, hoping to look leader-like.

Armin Laschet of the centre-right Christian Democrats should have had an advantage in these photo ops. As premier of North Rhine-Westphalia, Germany’s most populous state as well as one of the worst hit, he is the only incumbent executive in charge of a regional government in this race. Yet he squandered his opportunity when he was seen giggling with others in the background as Frank-Walter Steinmeier, Germany’s president, groped for solemn words in the foreground. Laschet remains odds-on to become the next chancellor. But the contrast between his bearing and Merkel’s dignified poise in Schuld won’t help him.

Nor is it clear that the Greens, runners-up in the polls, will gain much. Fighting climate change is their brand, so a flood should boost them, at least temporarily. Yet their candidate, Annalena Baerbock, has made her own blunders of late, and the Greens, at about 18%, trail the Christian Democrats by 10 points.

The bigger problem for voters — in Germany as elsewhere — is that floods, fires, droughts and other climate-caused disasters do not give simple and clear policy instructions, and certainly not partisan advice. Aside from the populist fringes, all parties in the German mainstream agree that the objective is to eliminate the country’s net emissions, by 2045 at the latest. The differences are in how to achieve this goal, and how to balance it against others including social cohesion and economic competitiveness.

The centre-right parties emphasise market-friendly mechanisms such as a carbon price, while conceding that some other restrictions will also be necessary. The centre-left parties are the reverse, eyeing more direct state intervention such as bans on combustion engines or short-haul flights in addition to a higher carbon price.

To lay people, these are nuances, rather than stark alternatives. That explains why many Germans want the next government to be a joint effort between the Christian Democrats and the Greens.

Despite the shock of the deluge, Germans are wary about responding too radically to any one catastrophe. Many remember Germany’s abrupt exit from nuclear power after the meltdown in Fukushima a decade ago, an overreaction that in hindsight made decarbonising Germany’s electricity grid unnecessarily hard.

This year’s floods and other disasters are convincing more people that resisting climate change deserves to be a political priority, even in times of pandemic and geopolitical upheaval. But they are also a reminder how painful trade-offs will be.

This summer, many Germans are feeling understandably overwhelmed — and suspecting that their leaders are no different. No matter how September’s election turns out, the fate of Schuld suggests that humanity has a lot more atoning left to do.