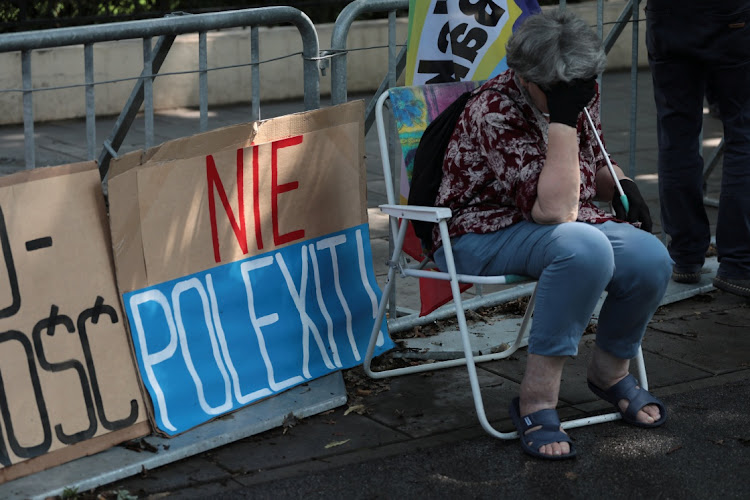 A woman sits in front of the Constitutional Tribunal during a hearing in Warsaw, Poland, July 13 2021. Picture: SLAWOMIR KAMINSKI/REUTERS

Warsaw — Interim measures imposed on the Polish judicial system by the top European court are against the Polish constitution, Poland’s Constitutional Tribunal said on Wednesday, accelerating the collision course between Warsaw and Brussels.

For the second time this week, the tribunal was addressing cases that call into question the primacy of EU Union law. Some observers say this could jeopardise Poland's continued membership of the 27-nation bloc.

“With the best will to interpret the constitution, it is impossible to find in it the powers of the (EU) Court of Justice to suspend Polish laws concerning the system of Polish courts,” said Constitutional Tribunal judge Bartlomiej Sochanski.

Wednesday’s ruling in Warsaw came as a result of proceedings initiated by Brussels against Poland, as part of which the Court of Justice of the European Union (CJEU) told Warsaw in 2020 to suspend a panel it had created to discipline judges.

The panel — the Polish Supreme Court’s disciplinary chamber — asked the tribunal whether such a suspension was constitutional.

Shortly before the ruling on Wednesday, the deputy head of the CJEU again told Poland to immediately halt all activities of the chamber — comments echoed by EU justice commissioner Didier Reynders. The CJEU is due to issue another ruling on the disciplinary chamber on Thursday.

Poland’s ruling nationalist Law and Justice (PiS) party says the EU is interfering in its right to make its own laws by challenging its judicial reforms, which it says are necessary to make courts function more effectively and remove a residue of communist influence.

“Fortunately the constitution and normality prevail over an attempt ... to interfere in the internal affairs of a member state, in this case Poland,” justice minister Zbigniew Ziobro told a news conference.

Opposition parties and human rights groups say the reforms aim to increase political control over the courts, and that questioning the primacy of EU law could result in Poland’s eventual exit from the bloc.

“We are in the process of a legal ‘Polexit’, which is happening step by step, and we will see where it will lead us,” said Human Rights Ombudsman Adam Bodnar, a vocal government critic.

On Tuesday, the Constitutional Tribunal postponed a ruling on whether the Polish constitution takes precedence over EU treaties.

Information posted on the Constitutional Tribunal website on Wednesday showed that this sitting, initially scheduled to resume on Thursday, would instead start again on August 3

The ruling nationalist Law and Justice (PiS) party has long argued that foreign groups own too much of the media, distorting public debate
World
1 year ago