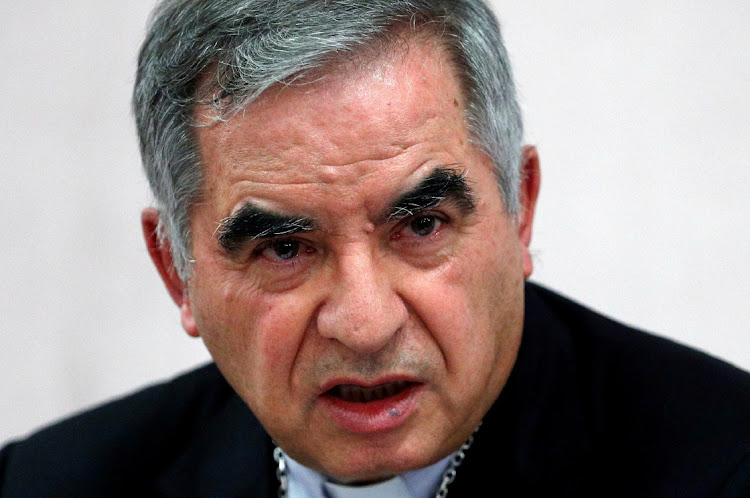 Vatican City — A prominent Italian cardinal was among 10 people sent to trial in the Vatican on Saturday charged with financial crimes including embezzlement, money-laundering, fraud, extortion and abuse of office.

Cardinal Angelo Becciu, formerly a senior official in the Vatican administration, as well as two top officials at the Vatican’s Financial Intelligence Unit will go on trial on July 27 over a multimillion-euro scandal involving the Vatican’s purchase of a building in one of London’s smartest districts.

The trial will inevitably bring a swirl of media interest to the tiny city-state surrounded by Rome, and appears to underscore Pope Francis’s determination to cure the rot in Vatican finances, even if it involves messy public hearings.

Becciu, 73, whom the pope fired from his senior clerical post last year for alleged nepotism, and who has always maintained his innocence during a two-year investigation, becomes the most senior Vatican official to be charged with financial crimes.

The pope personally gave the required approval last week for Becciu to be indicted, according to a 487-page indictment request seen by Reuters. The Vatican announced the indictments in a two-page statement.

The charges against Becciu include embezzlement and abuse of office. An Italian woman who worked for him was charged with embezzlement and the cardinal’s former secretary, Father Mauro Carlino, was accused of extortion.

Becciu said in a statement that he was a victim of a “machination” and reaffirmed his “absolute innocence”.

Carlino’s lawyer said his client was innocent, had been “acting under orders”, and had saved the Vatican millions of euros. He said starting a trial so soon did not give defence lawyers enough time to prepare.

Two Italian brokers, Gianluigi Torzi and Raffaele Mincione, were charged with embezzlement, fraud and money laundering. Torzi, for whom Italian magistrates issued an arrest warrant in April, was also charged with extortion.

There was no immediate response to attempts to reach their lawyers, but both men have consistently denied wrongdoing.

Four companies associated with individual defendants, two in Switzerland, one in the US and one in Slovenia, were also indicted, according to the document.

The investigation into the purchase of the building became public on October 1 2019, when Vatican police raided the offices of the secretariat of state, the administrative heart of the Catholic Church, and those of the Vatican's Financial Information Authority (AIF).

The then-president of the AIF, Rene Bruelhart, and the AIF’s former Italian director, Tommaso Di Ruzza, were charged with abuse of office for allegedly failing to adequately protect the Vatican’s interests and giving Torzi what the indictment request called an “undue advantage”.

Di Ruzza was also accused of embezzlement related to alleged inappropriate use of his official credit card, and of divulging confidential information.

Bruelhart said in a text message that he had “always carried out my functions and duties with correctness” and that “the truth about my innocence will emerge”.

Di Ruzza did not immediately respond to a voicemail requesting comment.

In 2014, the secretariat of state invested more than €200m, much of it from contributions from the faithful, in a fund run by Mincione, securing about 45% of a commercial and residential building at 60 Sloane Avenue in London's South Kensington district.

The indictment request said Mincione had tried to deceive the Vatican, which in 2018 tried to end the relationship.

It turned to Torzi for help in buying up the rest of the building, but later accused him of extortion.

At the time, Becciu was in the last year of his post as deputy secretary of state for general affairs, a powerful administrative position that handles hundreds of millions of euros.

All told, the secretariat of state sank more than €350m into the investment, according to Vatican media, and suffered what cardinal George Pell, the former Vatican treasurer, told Reuters last year were “enormous losses”.

Torzi was arrested in the Vatican in June 2020, and spent a week in custody.

According to the indictment request, Becciu is charged with five counts of embezzlement, two of abuse of office, and one count of inducing a witness to perjury. About 75 pages of the document are dedicated to Becciu.

It says Becciu tried to “heavily deflect” the inquiry into Vatican investments, including the London building, and tried to discredit the investigating magistrates via the Italian media.

Becciu continued to have influence over money transfers at the Secretariat even after he left the post, the document said.

The main charges against Becciu involve the alleged funnelling of money and contracts to companies or charitable organisations controlled by his brothers on their native island of Sardinia.

Another Sardinian, Cecilia Marogna, who worked for Becciu, was charged with embezzlement. Her cellphone was not connected.

She has said on Italian television that the money, sent to her company in Slovenia, was to ransom kidnapped missionaries in Africa. But the indictment request said much of it was used for “personal benefit”, including the purchase of luxury goods.

Market-friendly banker or central-authority saviour of the euro? Being a pragmatist, likely a bit of both
World
8 months ago

The report criticises the most senior Catholic leader in England and Wales, Cardinal Vincent Nichols, for failing to acknowledge any personal ...
World
11 months ago
Next Article