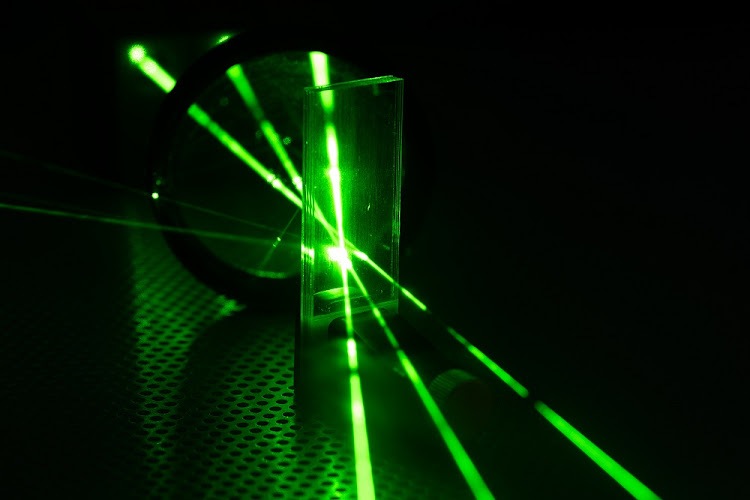 Rome — A UN-backed scientific research centre has teamed up with an Italian tech firm to explore whether laser light can be used to kill coronavirus particles suspended in the air and help keep indoor spaces safe.

The joint effort between the International Centre for Genetic Engineering and Biotechnology (ICGEB) of Trieste, a city in the north of Italy, and the nearby Eltech K-Laser company, was launched IN 2020 as Covid-19 was battering the country.

They created a device that forces air through a sterilisation chamber, which contains a laser beam filter that pulverises viruses and bacteria.

“I thought lasers were more for a shaman rather than a doctor but I have had to change my mind. The device proved able to kill the viruses in less than 50 milliseconds,” said Serena Zacchigna, group leader for Cardiovascular Biology at the ICGEB.

Healthy indoor environments with a substantially reduced pathogen count are deemed essential for public health in the post-Covid-19 crisis, a respiratory infection which has caused more than four-million deaths worldwide in barely 18 months.

Zacchigna hooked up with Italian engineer Francesco Zanata, the founder of Eltech K-Laser, a firm specialised in medical lasers whose products are used by sports stars to treat muscle inflammation and fractures.

But some experts have warned against the possible pitfalls of using light-based technologies to attack the virus that causes Covid-19. A study published by the Journal of Photochemistry & Photobiology in November 2020 highlighted concerns ranging from potential cancer risks to the cost of expensive light sources.

But Zacchigna and Zanata dismissed any health issues, saying the laser never comes into contact with human skin.

“Our device uses nature against nature. It is 100% safe for people and almost fully recyclable,” Zanata told Reuters.

The technology, however, does not eliminate viruses and bacteria when they drop from the air onto surfaces or the floor. Nor can it prevent direct contagion when someone who is infected sneezes or talks loudly in the proximity of someone else.

Eltech K-Laser has received a patent from Italian authorities and is seeking to extend this globally.

The portable version of the invention is some 1.8m) high and weighs about 25kg. The company said the technology can also be placed within air-conditioning units.

In the meantime, the first potential customers are lining up, including Germany’s EcoCare, a service provider of testing and vaccination solutions.

“The company aims to license the technology for German and UAE markets,” an EcoCare spokesperson said in an e-mail to Reuters.

For all the excitement generated by the announcement of an mRNA vaccine hub being established in SA, the country is still going to need help making ...
Features
1 month ago

The president says this is not only a moral imperative, an effective and comprehensive global vaccination is vital to ending the pandemic
National
2 months ago
Next Article