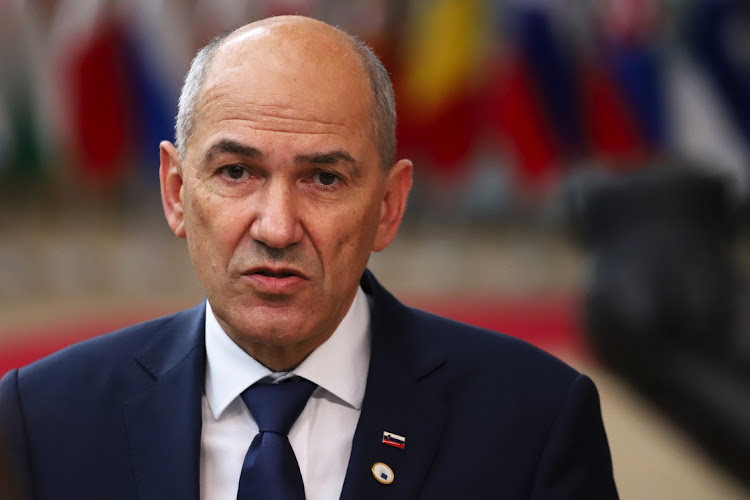 He trolls critics on Twitter, is waging a self-styled “war with media” and is accused of interfering with judicial independence. Slovenia’s nationalist prime minister is also taking over the EU’s rotating presidency — just as the bloc struggles to halt an authoritarian tilt in its eastern wing.

A vocal supporter of former US President Donald Trump, Janez Jansa is embracing the ruling model forged by his Hungarian ally Viktor Orban, who’s clashed with Brussels over everything from accepting migrants to upholding the rule of law and, most recently, LGBTQ rights.

After a stint in opposition, Jansa began a third term shortly before the coronavirus pandemic engulfed Europe last year. His government has since faced the biggest protests the euro-area member of 2.1-million people has seen since 2013. His ruling alliance is wobbling.

While that’s likely to leave Jansa as more of an organiser than a power-broker during the presidency, there’s still scope for him to clash with bigger nations as they confront Hungary and Poland for trampling on EU values. Leaders’ attention is also more likely to be focused on the spread of Covid-19’s Delta variant and the imminent departure of German Chancellor Angela Merkel.

“Jansa’s controversial style is likely to make other members of the European Council less likely to rely on him to find a compromise,” said Jacob Kirkegaard, a senior fellow at the German Marshall Fund of the US.

A stalwart Marxist before communism collapsed and Slovenia split with the former Yugoslavia in 1991, the 62-year-old Jansa has transformed himself into a right-wing firebrand in a career that includes a communist-era prison term and another in the previous decade that was overturned by his country’s top court.

His Slovenian Democratic Party won elections in 2018 but was blocked from power by rivals opposed to his EU- and migrant-bashing. He took control of the government two years later, poaching parties from the coalition after his predecessor resigned in the hope of strengthening his position through early elections.

Jansa has since survived protests, two no-confidence motions, the impeachment of five ministers on corruption allegations, missteps in handling the pandemic. He has also been in disputes with institutions including Slovenia’s state STA news service and the EU’s new prosecutor’s office. But defections from his coalition have left him with a dwindling minority in parliament and facing continued accusations of authoritarianism.

“Jansa’s attacks on the state news agency and EU prosecutors are a direct threat to media freedom, rule of law and our democracy,” said parliament speaker Igor Zorcic, a defector the prime minister has unsuccessfully tried to unseat.

Strengthening the rule of law and European values are, nevertheless, part of Slovenia’s planned agenda for the July-to-December presidency — along with improving the EU’s resilience to crisis, discussions on the bloc’s future and accelerating EU accession in the western Balkans — a topic that may struggle to gain traction as the pandemic continues to dominate.

Decisions in the EU are made by the heads of its 27 member states, making the presidency a mainly bureaucratic process. But there’s certainly scope to create mischief if a leader is so inclined and, given Jansa’s track record, it’s a possibility EU observers are bracing for.

Though he hasn’t gone as far as Orban in subjugating Slovenian institutions to his influence, talk of EU values rings hollow for many. After taking power, Jansa outlined a “War With Media” in an essay emulating Trump’s “direct communication with voters” via Twitter.

“The monopoly of lies can be brought down,” Jansa wrote, referring to “manipulations by hostile media”. His office did not respond to a request for an interview or e-mailed questions.

That “war” has included denouncing journalists as “presstitutes” as well as cutting funding to radio stations and newspapers deemed “biased”. The government halted financing for the state-run STA news service in January, and said funds may be released only under certain conditions that could increase its control over the agency.

“We have enough funds to keep operating until fall [autumn],” said Bojan Veselinovic, the MD of STA, which has been paying its bills with donations. “But we can’t keep this up forever.”

“Hostile public discourse, as well as smear campaigns and intimidation targeting civil-society activists and those who express critical opinions, harm free expression and can have a chilling effect on media freedom,” Council of Europe Commissioner of Human Rights Dunja Mijatovic said in June.

The prime minister is also at odds with the EU for failing to propose officials to work at the European Public Prosecutor’s Office, which was established to crack down on corruption and budget fraud. The move could hinder attempts to investigate Slovenia and prompted Jansa’s justice minister to resign.

“What kind of message do you want to send when you know the office starts working on June 1 and yet you haven’t nominated prosecutors?” EU Chief Prosecutor Laura Codruta Kovesi said in May.

Many of Jansa’s detractors, who include tens of thousands of demonstrators who’ve repeatedly rallied despite the threat of hefty fines, want him to quit and call snap elections. Less than one-third of Slovenes support his administration, according to opinion polls. But, with the opposition remaining fragmented, that appears unlikely.

“Tweeting is just part of the truth about Jansa,” said Danijel Krivec, the leader of the premier’s parliamentary caucus. “He’s a fitting leader for these times, both for Slovenia and the EU.”

Hate, intolerance and discrimination have no place in our union, European leaders tweeted in a co-ordinated move on Thursday
World
2 months ago
Next Article