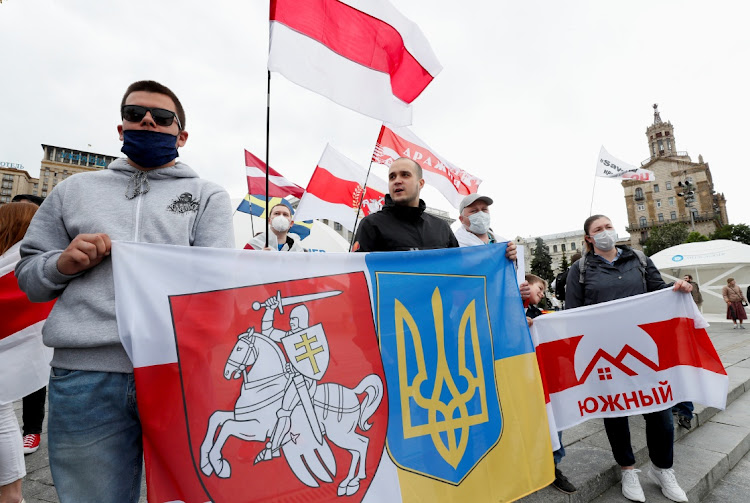 Activists attend a rally in support of Belarusian anti-government movement and detained blogger Roman Protasevich, in Kiev, Ukraine, on May 30 2021. Picture: REUTERS/GLEB GARANICH

Moscow — Belarus has moved opposition blogger Roman Protasevich, who was arrested in May after the grounding of a Ryanair plane in Minsk, from a detention facility to house arrest, the BBC Russian service reported on Friday.

Protasevich is now in a rented flat in Minsk, his father Dmitri Protasevich told the BBC, but said the authorities were still not providing any information to the family.

His girlfriend, Russian citizen Sofia Sapega, was also moved to a rented flat, where she is living alone, her stepfather told the BBC.

The Belarusian interior ministry and an investigative committee could not immediately be reached for comment on the reports.

The Russian embassy in Minsk confirmed that Sapega had been moved to house arrest, the TASS news agency reported.

The interception of the Ryanair plane flying between Athens and Vilnius on May 23 prompted international outrage, and this week the EU imposed wide-ranging economic sanctions on Belarus over the incident.

Belarusian authorities arrested Protasevich and Sapega after the plane landed, in an incident Western countries branded as state piracy.

Belarusian President Alexander Lukashenko, who faced months of antigovernment protests last year after his contested re-election in a vote his critics said was rigged, said the interception was justified to prevent a rebellion in Belarus.

“They don't tell us anything about Roman's condition, about his status, it is simply a mockery.”

Detained journalist Roman Protasevich tearfully confessed to his role in anti-government protests, but the opposition believes he was coerced
World
1 month ago