By June 2, only 18-million Russians — an eighth of the population — had received at least one dose of vaccine, despite them being available even in shops 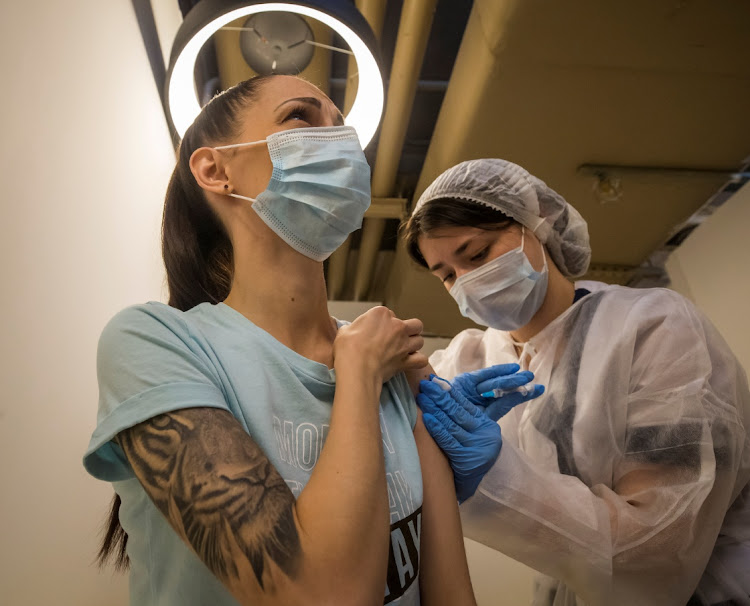 A woman receives an injection with Sputnik V (Gam-COVID-Vac) vaccine against the coronavirus disease (COVID-19) at a vaccination centre in Depo food mall in Moscow, Russia on June 17 2021. Picture: REUTERS/SHAMIL ZHUMATOV

Moscow — Seemingly lost for an explanation of why vaccine uptake is so low in Russia when coronavirus infections are soaring and vaccines are readily available, the Kremlin resorted on Friday to complaining of “nihilism”.

Five months into the campaign, and a growing battery of threats as well as incentives, by June 2 only 18-million Russians had received at least one dose of vaccine.

Vaccinations are even available in department stores. But at just one-eighth of the population, that figure, the most recent available, is far lower than in most Western countries.

The holdouts have proved impervious not only to cash payments and chances to win a car or even an apartment, but also to loss of earnings and threats of dismissal.

And unlike most countries, Russia is not short of vaccines, having approved four domestically made shots, and finding willing buyers around the world for the most widely available, Sputnik V.

The city of Moscow, where daily infections hit a record high on Friday, this week took one of the most radical steps anywhere by making vaccination compulsory for all service-sector workers. On Friday, it said people who had not been vaccinated would be refused non-emergency hospital treatment.

Russians often cite a general fear of new medical products as their reason for refusing the vaccination — not helped by a general distrust of authorities and negative media reports about foreign-made vaccines — and the fact that more than five-million people have already been infected and developed resistance.

Peskov rejected the idea that distrust was pervasive, blaming the surge on the low vaccination level, the virus's mutations, and “total nihilism”.

But the hesitancy is a fact.

“This product is the most in-demand in the world right now,” said the head of one Russian vaccine manufacturer.

“But here it’s like: 'Why did you give me this damned caviar, when I wanted bread?'.”

Moscow — which recorded more than 9,000 new cases on Friday, over half the national total — has had to reintroduce curbs that had been scrapped, including ordering bars and restaurants to shut by 11pm.

It has also taken the dramatic step of making vaccination mandatory for a range of people in public-facing jobs — from hairdressers and taxi drivers to bank tellers and teachers.

Several regions have followed Moscow’s lead and made vaccination compulsory for workers in certain sectors, but most are for now using an eclectic mix of tactics to get the numbers up.

A few weeks ago, a museum employee in the Belgorod region came to work to find buses waiting to take them to a concert hall in the centre of town.

“The hall was full of people who worked in the culture sector and had refused [to be vaccinated],” said the employee, whose account was echoed by a worker at another museum.

There, they were addressed by a doctor and an official who spoke at length about the importance of vaccination. The official said anyone who wanted to could get a Covid-19 shot on the way out.

Two flight attendants at the state airline Aeroflot said there had been no direct pressure to get shots, but that people who had not been vaccinated were now only permitted 60 hours of flight time per month, compared to 90 for vaccinated people — with a corresponding reduction in pay. Aeroflot declined to comment.

Several members of the armed services said the pressure there was more explicit.

“We were all forced to have the vaccination at the start of the year,” said Denis, a military pilot. “What choice do we have? They don't intimidate you, but they do insist.”

In Belgorod, a worker at a large farm, part of one of the largest agro-industrial holdings in Russia, said workers who refused to be vaccinated had been required to explain themselves in writing, and threatened with dismissal.

But in many areas, stick has gone hand-in-hand with carrot.

In Moscow, pensioners have been offered 1,000 roubles’ ($14) worth of goods from grocery shops and pharmacies as an incentive to have the vaccination. People were also entered into a lottery that had five cars as prizes every week.

In the city of Ufa, getting vaccinated got you a lottery ticket that could even win you an apartment.

But so far, nothing has really worked.

“Take off your masks,” the doctor lecturing museum employees told them sarcastically. “I want you all to get sick, I'll earn more money that way.”

The Palestinian Authority has agreed to give Israel a reciprocal number of Pfizer-BioNTech doses from one of its own shipments due to arrive later in ...
World
1 year ago

The problem is not the country’s vaccines, which have been available since late 2020: rather, it’s the devastatingly slow pace of inoculation
Opinion
1 year ago

The province has set aside more than R2bn for procurement, but needs government and regulatory approval
National
1 year ago

The company plans to apply for regulatory clearance globally, with much of the first available doses going to low- and middle-income countries
World
1 year ago
Next Article