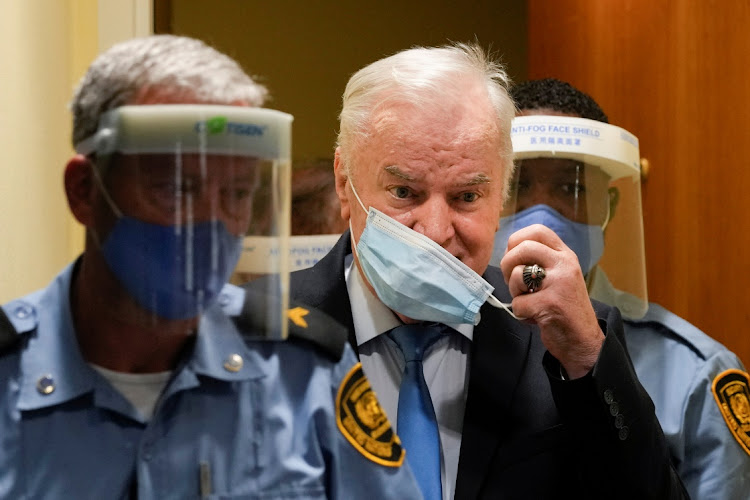 Former Bosnian Serb military leader Ratko Mladic enters the courtroom prior to the pronouncement of his appeal judgment at The Hague, June 8 2021. Picture: PETER DEJONG/REUTERS

Bosnia’s notorious wartime commander Ratko Mladic lost his appeal against the guilty verdict for his role in genocide and other atrocities in Europe’s bloodiest conflict since World War 2.

The 78-year-old former military leader of ethnic Serbs, who fought against Muslims and Croats when the collapse of Yugoslavia triggered the 1992-1995 war in Bosnia, will remain in prison for life, the international tribunal in The Hague ruled on Tuesday.

Mladic, who earned the nickname of “the Butcher of Bosnia” from his victims, had appealed the 2017 ruling that found him responsible for the murder of about 8,000 Muslim men and boys in Srebrenica, for the 44-month siege of capital Sarajevo and other crimes against humanity.

“The Appeals Chamber affirmed Mladic’s convictions for persecution, extermination, murder, deportation, and other inhumane acts — forcible transfer — as crimes against humanity, as well as for murder, terror, unlawful attacks on civilians, and hostage-taking,” judge Prisca Matimba Nyambe said during the final verdict.

More than 100,000 people perished in the fighting between Bosnia’s three main ethnic groups, and millions were forced from their homes. The country of 3.2-million suffered the most from Yugoslavia’s six republics when their federation broke up, and it remains tense and semi-divided under a US-brokered peace pact.

Mladic was on the run for many years, dodging justice until arrest in 2011 in Serbia. The initial verdict found him guilty in 10 of 11 counts of war crimes charges. He sought a full acquittal. Prosecutors also appealed to demand a guilty verdict on all counts, including genocide in six other municipalities. The prosecutors’ appeal was rejected.

It’s the last high-profile case for the UN tribunal created to punish those responsible for the bloodshed in the former Yugoslavia. Former Bosnian Serb political leader Radovan Karadzic was sentenced to life in 2019 on similar charges.

Fatou Bensouda says the probe will cover events in West Bank,  East Jerusalem and the Gaza Strip
World
3 months ago

He is accused of ‘recruitment and use of a child soldier, forced transportation, looting, cruel treatment of civilians, attempted murder, murder, ...
World
6 months ago
Next Article