Hopelessness and despair have plagued the region for generations, but there is now money available for renewal Homeless people rest on a street in Naples. The South has been neglected and has widespread corruption and chronic unemployment. All eyes are now on Prime Minister Mario Draghi as he plans to uplift the region with EU pandemic aid funds and bolster the case for fiscal union. Picture: CIRO DE LUCA/REUTERS

A half-ripped poster of Mario Draghi, his face crossed out in blood-red paint, greets visitors to a ruined housing estate in Naples that is a symbol not just of the Mob but of the hopelessness and despair that have plagued Italy’s south for generations.

Le Vele, or the Sails, was inspired by French modernist Le Corbusier and built around the same time as the Barbican complex on the edge of the City of London. With the same concrete aesthetic and a shared ideal of modern living, one became a triumph of city planning, the other descended into an urban slum. The common walkways and staircases meant to recreate the vitality of Naples’s old downtown were taken over by drug traffickers and inspired the book and film Gomorrah.

“A few years ago, no state representative could come,” says deputy mayor Carmine Piscopo, sipping an espresso that a local woman brought out to him and his guests. Behind him, a staircase is littered with broken glass, a discarded mattress and boiler. A child is crying. 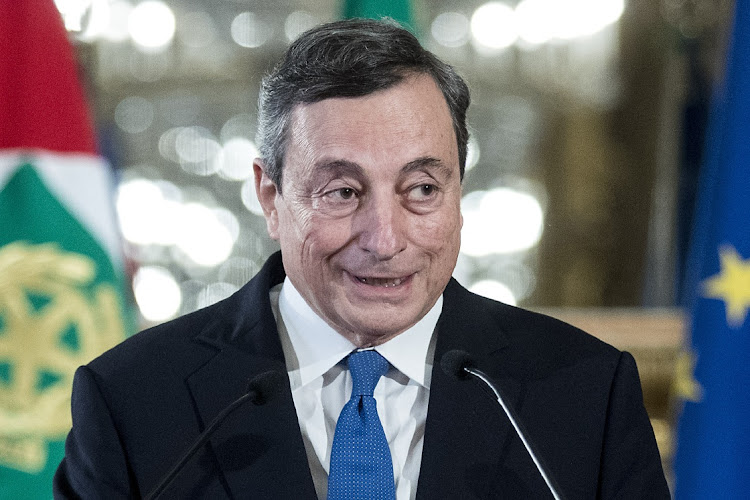 Home to hundreds of poor families, Le Vele is being torn down and the area rebuilt on Draghi’s watch as part of a master plan to resurrect the fortunes of the so-called Mezzogiorno stretching out south from Naples. The man credited with saving the euro almost a decade ago is now taking on a political and economic endeavour that eluded the architects of unification 150 years ago: make Italy a cohesive nation from Sicily to the Alps.

Such is the scale of the task — decrepit infrastructure, corruption, chronic unemployment, Kafkaesque red tape — that you have to wonder why this time would be different. Every Italian statesman promises to sort out the South, where unemployment is almost twice that of the North, and GDP per capita is barely half.

What Draghi brings is an unprecedented amount of money and the experience to manage it well. He is staking his reputation as a fixer on pulling it off. The country is the biggest recipient of the EU pandemic aid and he is devoting almost 40% of his €260bn recovery programme to the regions left behind.

The issue is timing. Draghi is a technocrat prime minister and even though he is a heavyweight the direction of the political winds could mean that Italy is heading into one of its all-too-frequent elections within the next two years.

You get a sense of the challenge in Le Vele, with that defaced poster that disparages bankers and mocks Draghi’s most famous pronouncement: “Whatever it takes.” Investors may love him, but a resume that includes the European Central Bank and Goldman Sachs does not cut much ice in the deprived neighbourhoods of the South where they have heard politicians making bold promises plenty of times before.

In Berlin, in Paris, in Brussels, officials are watching closely. They have observed the jumps in Italy’s debts over the years and the failure of successive efforts to knock the economy into shape, concerned that one day the European project could face a reckoning. Indeed, the upward creep of Italy’s borrowing costs in recent weeks is “an ominous development” that highlights the risks of a fiscal crisis, according to David Powell and Dan Hanson of Bloomberg Economics.

“This is serious for the future of Europe,” Draghi told the Senate in Rome in April as he laid out his plans and took ownership. “We will, in a certain sense, be responsible for winning or losing.”

If Draghi succeeds in putting Italy back on a path of growth, he will bolster the case for fiscal union by making the jointly financed recovery fund permanent, said one senior EU official. If he fails, any argument for further monetary integration evaporates.

The Italian state itself is a big part of the problem, says Letizia Magaldi, whose family runs an industrial materials firm in Salerno near Naples. She wants the state to hire officials who understand new technologies to cut the two-year lead time on renewable energy projects. “We can’t afford to wait that long,” she says.

To turn the situation around, Draghi has to solve the eternal riddle of the place Italians casually refer to as the land of the blistering midday sun. In the Mezzogiorno the bureaucracy is maddening, the buildings are crumbling, and the state struggles to hold back the influence of organised crime — be it the Mafia in Sicily, the Camorra in the Campania region or the ’Ndrangheta in Calabria — whose presence is felt locally and whose tentacles reach globally.

It is easy to forget that Italy is a young country by European standards or that before reunification, the South was rich. Its quarrelsome states only came together in the late 19th century and sharp disparities between regions have plagued the peninsula ever since.

To address that inequality, Draghi has mapped out three new high-speed rail lines to connect more than 11-million people to the centres of activity as part of a sweeping package to modernise education, the state, labour market, energy system and, well, pretty much every corner of economic life.

He is literally trying to stitch the country together. Eugenio Mazzarella, a philosophy professor at the Federico II university in Naples, reminds us that Italy is “still only ‘a geographical expression’.” The former legislator is borrowing a famous historic put-down from the time when the first signs of Italy wanting to be one nation were bubbling up and the Austrian empire wanted to stamp out any spirit of independence within its vast borders.

“With high-speed rail, you weave Italy together,” Mazzarella says. “You achieve a real unification.”

That starts with Le Vele, the setting of the Italian crime series on HBO. Since 1997, four of the seven towers have been razed to the ground with residents moved to social housing. Two more are due to be demolished soon. In their wake, City Hall plans to build new housing, offices, schools, parks and sports facilities. The area has seen renewal plans before though, and it is still saddled with a 47% jobless rate.

“Our biggest challenge has been to win the trust of the local people,” says Piscopo. The City of Naples is seeking €63m of funding, with the backing of community leader Omero Benfenati.

“With the recovery fund money, we can create jobs, and we can create real jobs for people who’ve only found undeclared work,” Benfenati said, while warning that “the money can go in the wrong direction”.

A few miles away down on the waterfront, Giovanni Lombardi is optimistic.

He is hiring like mad at his energy consulting firm, Tecno, in anticipation of a surge in new business. Inside the 17th century palazzo where he has set up headquarters, engineers are modelling carbon emissions at stand-up desks and plans are afoot to double the workforce with 150 new hires.

“We have the brains, we have the universities,” he says. “If we connect the South, then growth is possible.”

The job paid €115,000 when his predecessor Giuseppe Conte held the post, though Conte opted to take only 80%
World
1 month ago

The government has spent more than €130bn so far to support the economy, with Italy in and out of Covid-19 lockdowns for more than a year
World
2 months ago

Talks focus on closer co-operation, trade and countering human trafficking across the Mediterranean
World
2 months ago