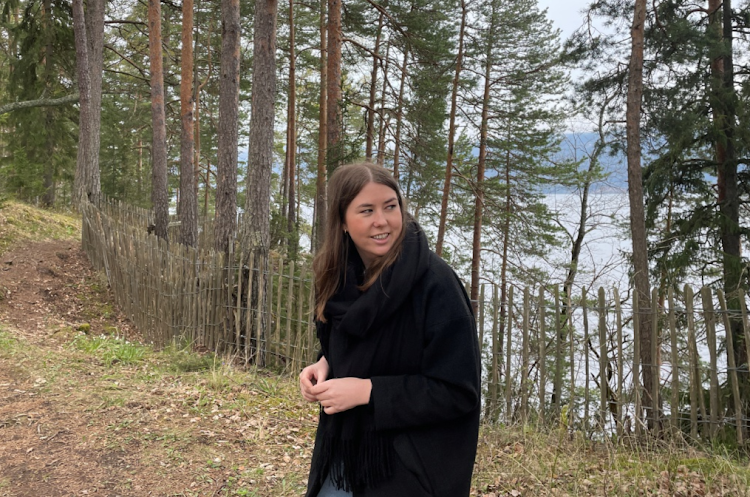 Astrid Hoem, a survivor of the 2011 shooting on Utoeya, retraces the steps of her escape from Anders Behring Breivik in Utoeya, Norway, in this May 11, 2021 file photo. Picture: REUTERS/GWLADYS FOUCHE

Utoeya — Nearly 10 years after Anders Behring Breivik tried to kill her on the Norwegian island of Utoeya, Astrid Hoem is back there to explain to a group of teenagers how she ran for her life and hid in a beach cove while Breivik murdered others around her.

“He shot a girl next to me, in the back. She told me: ‘Please tell my parents I love them because I am going to die’,” Hoem, 26, tells the high school pupils. The girl survived.

The teenagers, who are on a three-day workshop on how to solve conflicts and challenge racist attitudes, listen in silence as Hoem recalls her memories: how she did not move for about two hours from under a rock, how she did not call friends in fear the ring would give their positions away to Breivik, how she thought Norway was at war.

Breivik detonated a car bomb outside the prime minister’s office in Oslo, killing eight, before driving to Utoeya and shooting 69 people gathered at a Labour party youth camp on July 22, 2011.

Survivors, many of whom were teenagers at the time, are determined to confront the far-right ideology which was a catalyst for the attack.

“It is important that we talk about it because I do not want it to happen again,” Hoem tells them.

It already has. In New Zealand in March 2019 white supremacist Brenton Tarrant, who said in his manifesto he was inspired by Breivik, shot dead 51 people at two mosques.

Later that year, Norwegian Philip Manshaus killed his Chinese-born adopted sister and tried to shoot worshippers at a mosque. He cited Tarrant as an inspiration, according to a court psychiatric report.

“Those opinions, those conspiracies, that hate... is stronger now than it was 10 years ago,” Hoem told Reuters.

In April, Labour decided at its party congress that, should it regain power in elections in September, it would set up a commission to investigate the early lives of Breivik and Manshaus to understand and prevent radicalisation.

The commission would also probe Norwegians who became Islamist fighters in Syria.

“What can we do to keep young, especially young white males, from turning out so extreme opinions that they feel they can take lives because they disagree with someone? We have to know how to prevent it in school, on the internet, in our communities,” Hoem said.

Breivik believed Labour betrayed Norway simply by allowing Muslims to live there as part of what he believed was a worldwide conspiracy to make Islam the dominant religion in Europe rather than Christianity.

Survivors see some mainstream right-wing politicians legitimising this view by being critical of Muslims and labelling them as a threat to Norwegian society.

Over the past decade, the populist Progress Party has raised concerns about what it says is “sneaky Islamisation” taking place that contradicts Norway’s traditional way of living. Progress, which has repeatedly condemned the Breivik attacks, denies its views help fuel far-right extremism.

But party leader Sylvi Listhaug said it would continue to push for tighter immigration and integration policies. “Political debate must be allowed. We do not allow ourselves to be intimidated into silence even if attempts are made to put labels on us,” she said.

The new attitude by survivors is a departure from Norway’s response at the time, which emphasised unity and consensus.

In the following months, debate focused on the failures of authorities such as the delayed response by police to Utoeya, rather than on Breivik's worldview.

“The 10-year anniversary of July 22 gives a concrete occasion to look back and to try to recalibrate the debate,” said Hallvard Notaker, the author of Labour and July 22.

Freedom of information is a recurring theme, with other nominees including the Committee to Protect Journalists and Reporters without Borders
World
4 months ago

On September 1, Norway said it had sustained a cyber attack the previous week and the e-mail accounts of some MPs and employees were hacked
World
7 months ago

The $1.3-trillion wealth fund is pulling investments from companies over their tax policies and issuing new tax guidance to others in the fund
World
4 months ago
Next Article