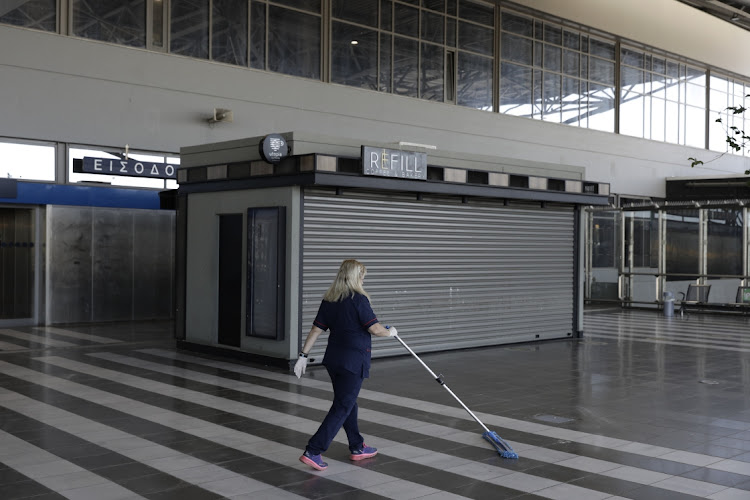 A worker cleans the floor at Thessaloniki Makedonia Airport, operated by Fraport Greece, in Thessaloniki, Greece, on Wednesday, May 19 2021. Picture: BLOOMBERG/KONSTANTINOS TSAKALIDIS

Brussels — The labour shortage that is hitting the US as the nation rebounds from the pandemic is also coming to Europe, where it could prove even more difficult to fix.

Like the US, where April’s payroll growth fell far short of expectations, Europe will struggle to match workers with jobs. That is despite unemployment at more than 7% in the EU — and more than twice as high in Greece and Spain — which is not predicted to return to pre-crisis levels before 2023.

In the short term, coronavirus travel restrictions mean workers cannot cross borders as easily as usual within the 27-nation bloc. That is a problem because the EU is about to start dishing out its €800bn recovery fund, which is focused on environmental and digital industries that will require specialised workers.

But the networks and pipelines that provide new workers have also been disrupted, which will have a lingering effect. Job fairs have been cancelled and vocational training programmes upended. Universities have seen a slump in foreign students.

Brexit has imposed an additional barrier to movement of labour, because the trade deal between the UK and EU that started in 2021 includes restrictions on movement and only limited mutual recognition of some qualifications.

“In Europe, the problems are more structural,” said Axel Pluennecke, an economist at the German Economic Institute in Cologne. “Especially in the technical professions, areas like digitisation, decarbonisation, there will be big demand for qualified workers. You really have to wonder whether this demand will be met.”

The region is already feeling some of the effect of the border closures imposed during the pandemic. Net migration to Germany, Europe’s largest economy, fell by about a third in 2020. Norway is short of specialised hospitality workers such as foreign rafting guides, and relaxed entry restrictions in April to include workers “strictly necessary to avoid downtime in projects or businesses for the next four months”.

Swedish battery-cell manufacturer Northvolt needs 3,000 workers for a factory under construction in Skellefteå, and its CEO — former Tesla executive Peter Carlsson — has repeatedly highlighted access to expertise as a key challenge.

An EU report in December identified shortages in construction, engineering, software development and — more prominently than in the past — health care.

Likewise, training schools have been hit by closures and social-distancing rules. Sign-ups for vocational programmes in Germany, which prepare young people for hundreds of specialised professions, declined more than 9% in 2020 in a “clear effect” of the pandemic, according to the nation’s statistics office.

German universities had almost 30% fewer international students in 2020, and many studied online from their home countries, eliminating the social interactions that often convince them to stay for a job after graduating.

“The challenge for companies, for countries, is to synchronise the job disruption with the job creation,” said Alain Dehaze, CEO of Swiss-based global recruitment agency Adecco Group. “You’ll have structural changes in mobility, in consumption, and it’ll have an impact on jobs.”

Some economies might benefit if the crisis stops their best workers leaving. Poland, Romania and Italy — the main countries of origin for skilled EU migrants in 2019 — are also among the biggest beneficiaries of the bloc’s recovery fund. They’ll see their demand for specialised jobs rise.

Systems for matching skilled workers with the companies that require them will also ultimately be rebuilt. But that will take time, and the delay will exacerbate a problem that Europe was struggling with even before the pandemic — demographics.

Germany’s workforce, for example, is projected to shrink by about 4-million by 2030 as the baby-boomer generation retires.

“German companies will have to increasingly look outside of the EU to meet their demand for skilled labour,” said Ulrich Kober, head of integration and education at the Bertelsmann Stiftung. “Migration from other EU countries doesn’t cut it any more.”

That poses a political challenge for governments. They may find themselves under pressure to double down on attracting foreign workers despite high local unemployment, the Brussels-based Migration Policy Institute Europe wrote in a report in February.

“Governments will need to carefully consider the sensitivities around continuing to recruit from abroad,” it said.

As a new variant that originated in India spreads rapidly elsewhere, measures to contain the disease will remain visible in Europe
World
2 months ago