Rabat recalls its ambassador to Madrid as diplomatic tensions rise over mass crossing of up to 8,000 migrants 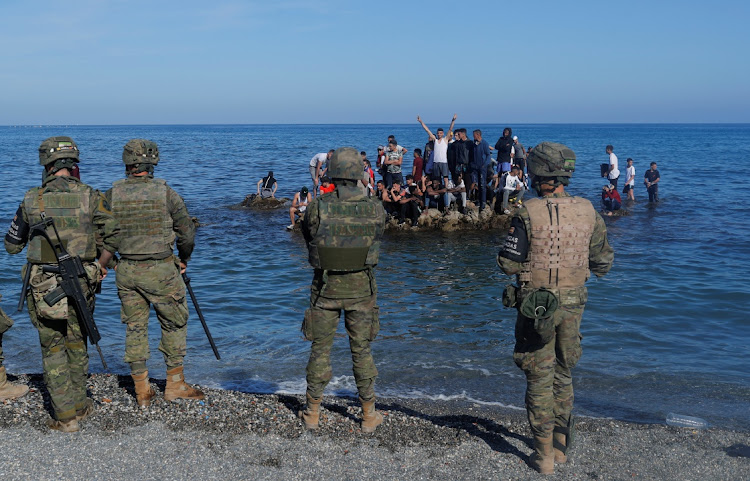 Spanish legionnaires watch Moroccan citizens standing on rocks at El Tarajal beach, near the fence between the Spanish-Moroccan border, after thousands of migrants swam across this border on Monday in a bid to find sanctuary in the Spanish territory of Ceuta. Picture: JON NAZCA/REUTERS

Ceuta —  A sudden influx of migrants swimming into the Spanish enclave of Ceuta in northern Africa is a serious crisis for Europe, Prime Minister Pedro Sanchez said on Tuesday, vowing to re-establish order promptly amid heightened diplomatic tensions with Morocco.

Spain deployed troops to Ceuta to patrol the border with Morocco after about 8,000 migrants, many from Sub-Saharan Africa and including 1,500 minors, entered the enclave on Monday and Tuesday by swimming in or climbing over the fence.

Armoured vehicles were guarding Ceuta's beach on Tuesday, and soldiers and police used batons to clear migrants from the beach and threw smoke bombs to discourage others from crossing.

A Reuters reporter on the ground said the number of arrivals by sea had slowed, and some migrants were voluntarily returning to Morocco. A few others could be seen being carried away by soldiers. Footage of the beach at about 8pm local time showed nearly all migrants had been cleared.

Spain said about 4,000 migrants had already been sent back to Morocco, under a readmission deal.

The regional leader of Ceuta criticised what he described as Morocco's passivity in the face of Monday's surge, and some independent experts said Rabat had initially allowed it as a means of pressuring Madrid over its decision to admit a rebel leader from the Western Sahara to a Spanish hospital.

The Spanish government did not make that connection, with Sanchez calling the north African nation a friend of Spain and the interior ministry citing co-operation over the readmissions, though foreign minister Arancha Gonzalez Laya told Morocco’s ambassador Spain rejected and disapproved of the mass arrivals.

Rabat recalled its ambassador to Madrid for consultations, said a diplomatic source who declined to be named, adding that relations with Spain needed a moment of “contemplation”. Moroccan authorities did not respond to requests for comment.

Moroccan TV footage showed authorities setting up barriers on Tuesday afternoon to prevent people from crossing into Ceuta, but footage filmed from the Spanish side earlier showed a Moroccan soldier or policeman waving dozens of running migrants through a gate to no-man’s land without any checks.

“This sudden arrival of irregular migrants is a serious crisis for Spain and Europe,” Sanchez said in a televised address before his arrival in Ceuta.

European Commission vice-president Margaritis Schinas tweeted that the enclave's frontier was a European border, expressing his “full solidarity with Spain”.

Ceuta, with a population of 80,000, is on the northern tip of Morocco across from Gibraltar. Along with another Spanish enclave, Melilla, it has long been a magnet for African migrants seeking a better life in Europe. Morocco has a claim on both.

Morocco’s foreign ministry criticised what it said was Spain’s decision to admit Ghali under a false identity without informing Morocco, warning of repercussions.

The US  in December recognised Moroccan sovereignty over the Western Sahara territory.

The pandemic has led to the ‘intentional exclusion of migrants from Covid-19 prevention and support programmes’, a new report shows
World
3 months ago

Drop in number of employed people amid Covid-19 pandemic was almost 1.4-million while jobless rate rose to 32.5%
Economy
3 months ago