Helped by its vaccination rollout, the country is set to bounce back from the pandemic slump with the economy up 2.1% on February 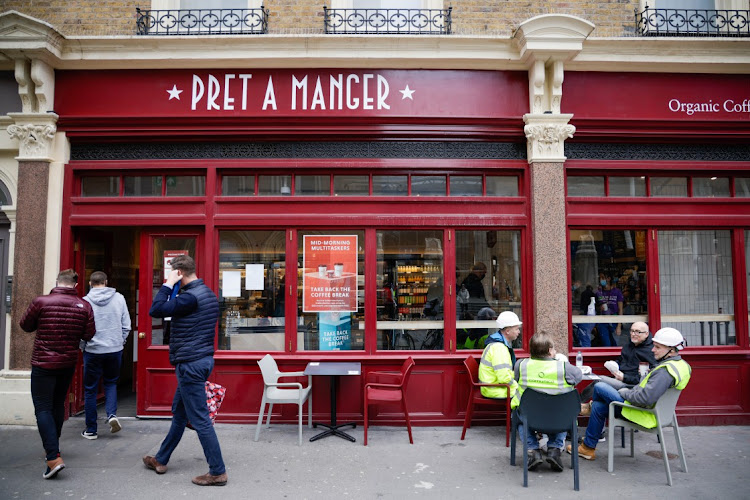 Customers queue to enter a Pret A Manager sandwich shop in London, UK, on May 6 2021. Picture: BLOOMBERG/JASON ALDEN

London — Britain’s pandemic-battered economy grew more strongly than expected in March as it gathered speed for a bounce-back from its coronavirus slump of 2020, official data showed on Wednesday.

The 2.1% growth from February was led by the reopening of schools which, as well as Covid-19 testing and vaccinations, pushed up activity in the public sector and by retailers as consumers spent some of their lockdown savings.

There was also a burst of work in the construction sector ahead of the expiry of a tax break for homebuyers.

Analysts polled by Reuters had expected monthly growth of 1.3% for world’s fifth-biggest economy.

“Businesses and the government alike will feel this data marks a turning point,” Ana Boata, head of macroeconomic research at trade credit insurer Euler Hermes, said. “With the ongoing easing of restrictions, confirmed this week by the prime minister, there’s hope that this could be the start of a long hot summer for British businesses.”

Over the first three months of 2021, when the country was under a third lockdown, GDP shrank by 1.5%, the Office for National Statistics (ONS) said.

Though a less severe hit than initially feared, Samuel Tombs, an economist with Pantheon Macroeconomics, said it meant Britain almost certainly remained the laggard among the G7 rich countries for the fourth quarter in a row.

However, British GDP looked on course grow by 5% in the April-to-June period, “which should mean the UK finally hands over the wooden spoon to another G7 economy”.

The Bank of England (BOE) said last week that it expected the economy would recover quickly as the country speeds ahead with Europe’s fastest vaccination programme and coronavirus restrictions are lifted.

Its forecast for 7.25% growth in 2021 would be the fastest since a World War 2 rush to re-arm, though by comparison, GDP collapsed by 9.8% in 2020, its deepest slump in more than three centuries.

“Despite a difficult start to this year, economic growth in March is a promising sign of things to come,” finance minister Rishi Sunak said. “As we cautiously reopen the economy, I will continue to take all the steps necessary to support our recovery.”

Britain’s economy remains 8.7% smaller than at the end of 2019. The BOE expects it will be back to its pre-pandemic size by the end of this year.

Prime Minister Boris Johnson allowed non-essential shops to reopen and outdoor hospitality to resume in April in England and there have been signs that the economy accelerated in response.

Further relaxations are due to take place next week before the lifting of almost all remaining restrictions in late June.

The ONS data showed Britain’s dominant services industry grew by 1.9% in March from February, its strongest growth since last August, while manufacturing and construction also grew more strongly than expected by analysts in the Reuters poll.

Separate trade figures showed Britain imported more goods from non-EU countries than EU countries during the first quarter for the first time since records began in 1997.

The ONS warned that it was too soon to say if this was the start of a trend or just short-term disruption. “Exports of goods to the EU continued to increase in March and are now almost back to their December level,” ONS statistician Darren Morgan said. “However, imports from Europe remain sluggish.”

Business investment fell by almost 12% between January and March. The ONS said some companies brought forward investment plans to late 2020 to avoid disruption caused by leaving the EU’s single market, while others delayed plans for early 2021 to take advantage of a new tax break that was launched in April.

Johnson sets out vision for recovery plan in Queen’s Speech

An open letter to President Emmanuel Macron — unsigned but attributed to serving officers — has stoked controversy with a warning of ‘chaos and ...
World
6 months ago

Norway dips in to wealth fund for relief during pandemic

The level of government withdrawals from the fund forced it to start liquidating assets last year, but the fund has seen near-record returns as ...
World
6 months ago
Next Article