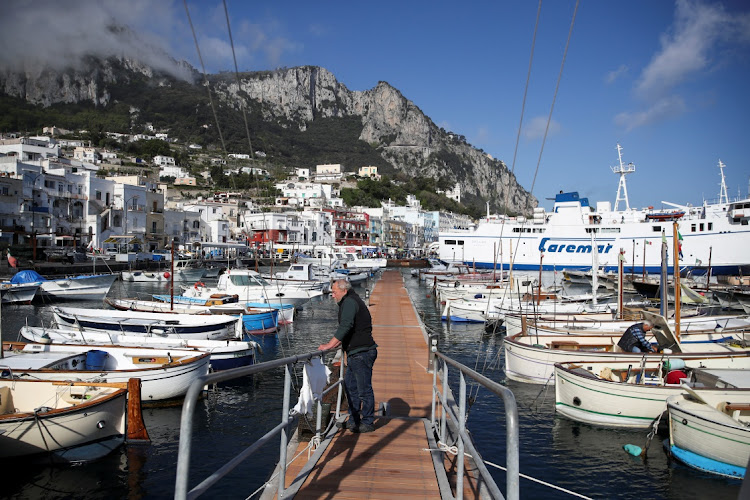 A man looks on in Marina Grande hoping for the return of foreign tourists and a busy summer season despite the coronavirus disease, on the island of Capri, Italy, in this April 28 2021 file photo. Picture: REUTERS/YARA NARDI

Capri — Capri’s world has always been blue — the colour of the water surrounding the Mediterranean island, many of its fishing boats and, most famously, the light in its Blue Grotto.

Now, the glamorous tourist destination with magnificent mansions, classy restaurants and world-class shopping is hoping to shake off the pandemic blues after a year of on-and-off closures that have depressed the economy.

“I can sense a positive spirit, a spirit of recovery,” said Paolo Federico, GM of the five-star Punta Tragara hotel. “Maybe this anxiety will not be part of our baggage any more.”

Capri, like the rest of Italy, is slowly reopening. Outdoor dining became possible again on April 26 and indoor dining will be allowed at the start of June.

Tourism to the island, made famous in the last century by superstar habitués such as Audrey Hepburn and Sophia Loren and later by Tom Cruise and Jennifer Lopez, plunged by about 70% over the prepandemic period when up to 3-million people visited yearly.

Optimism trickles down from luxury fashion shops and top-tier restaurants such as La Capannina, where a photo of Jackie Kennedy and Aristotle Onassis eating there 50 years ago hangs on the wall, to more modest haunts as well as to fishermen and boat operators.

Vincenzo Iaccarino, president of the island’s Blue Grotto boat drivers, found it strange for Capresi — as the island’s natives are known — to have the place mostly to themselves, almost as if a key ingredient was missing in a recipe.

Iaccarino, 57, a boat owner authorised to take tourists inside Capri’s famed Blue Grotto, has for 33 years shepherded them past the narrow, low opening, just as his father did.

Sunlight passing through an underwater cavity creates an illuminating reflection so magically blue that the Roman emperor Tiberius, who had a villa on the island, is said to have used it as his private swimming hole 2,000 years ago.

Fourteen of Italy’s 20 regions, including the Campania region where Capri is off the coast of Naples, have been designated yellow zones with a relatively low Covid risk. Five are classified orange and one red.

“I’m optimistic and I hope we will work because (we won’t be able to stand) another year like last year,” said Iaccarino.

The EU has said American visitors, a traditional mainstay for Capri’s tourist season, can travel to member countries this summer if they have been vaccinated. Europe is racing to launch a digital health “green pass” scheme in June to save the holiday season.

Capri’s mayor, Marino Lembo, is hopeful that the worst is over for the island’s 14,000 residents.

“We are optimistic, the world has changed and many negative things have happened but, looking to the future, I believe we will come out of this situation slowly, respecting the rules,” he said.

Covid-19 has treated the wealthy differently, and many, well below usual retirement age, are asking ‘Does it all matter as much as you think it does’
World
1 week ago

Health experts worry that public scepticism could prolong a pandemic that has already killed more than 3.3-million people worldwide
World
1 week ago
Next Article