A total 70% of people age 18-24 would vote ‘yes’ in an independence referendum, poll finds 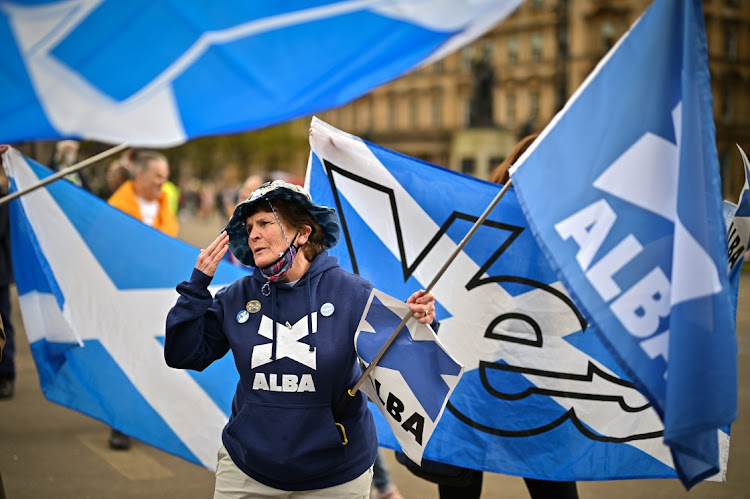 Scottish independence supporters gather in George Square for a rally organised by 'All Under One Banner' on May 1 2021 in Glasgow, Scotland. Picture: GETTY IMAGES/JEFF J MITCHELL

London — Robyn Graham was too young to vote in Scotland’s 2014 independence referendum, and now she is determined to get her chance in another one.

The 19-year-old law and politics student at the University of Glasgow is among a generation of youth for whom the political landscape has been dominated by the constitutional future of the three-centuries-old UK. To her, it’s not a matter of if, but when Scotland breaks away.

“I’m sure we will grow old in an independent Scotland,” said Graham, national secretary of the youth wing of the Scottish National Party, which has been running the country’s semi-autonomous government since she was five years old.

Scotland heads into an election on May 6 that has become a pitched battle over whether the nation should get another say on its place in the UK after Brexit. Polls predict the pro-independence camp is on course to win big and intensify a standoff with the government in London.

The problem for the integrity of the UK is that the demographics look increasing stacked against it the longer the wrangling rumbles on. While Scotland is about evenly split between support for independence and remaining in the UK, its rebel youth is disproportionately in favour of going it alone. John Curtice, Britain’s most prominent psephologist, calls it a gradual erosion of the foundations of support for the union.

A recent YouGov poll found that 70% of people age 18-24 would vote “yes” in an independence referendum when excluding “don’t knows”. A Believe In Scotland poll, commissioned by PanelBase, showed that the disparity with older voters ran even deeper: It found 72% of voters between 16 — the minimum voting age in Scotland — and 35 would vote “yes”.

The problem for Prime Minister Boris Johnson, or indeed subsequent leaders, is that the issue is unlikely to fade away. His current stance is that the 2014 ballot, when Scots decided by 55% to 45% to remain in the UK, was a once-in-a-generation event. But Scots voted more emphatically to stay in the EU two years later, and across the UK under-25s were more than twice as likely to want to remain in the bloc than leave.

It’s not that I believe in it for independence’s sake. The majority of my life has been lived under a Tory government that Scotland has never voted for

“The support for independence is entwined with the attitude towards Brexit, so it’s not a surprise now that the younger demographic want to be independent,” said Curtice, a professor of politics at Strathclyde University.

The Conservatives are split over what the response should be: Continue to ignore the SNP’s demands for another independence vote, or buy time by devolving new powers and offering more investment as the UK builds out of the pandemic.

Cameron Glasgow, 20, echoes the claim by Nicola Sturgeon, who leads the SNP and the Scottish government, that it’s a matter of democratic deficit. No region of Scotland voted for Brexit. Johnson’s Conservatives haven’t won the most seats in an election in the country, formerly a Labour Party stronghold before it was ousted by the SNP, since 1955.

“It’s not that I believe in it for independence’s sake,” said Glasgow, a member of the pro-independence Scottish Greens from the town of Livingston. “The majority of my life has been lived under a Tory government that Scotland has never voted for.”

The shifting generational perspective could be down to what young Scots have been brought up with. Many weren’t old enough — or not yet born — to remember a time when Scotland was solely run from London before the Scottish parliament at Holyrood in Edinburgh was reestablished in 1999.

Then they witnessed the rise of the SNP, an independence referendum that engaged as well as divided the country and a Brexit vote that underscored differences with England.

Leodhas Massie, 26, a Green Party candidate from the northern region of Moray, can’t remember a time when Scotland didn’t have control over much of its own affairs, such as education and health, which has been prominent as Sturgeon fronted the fight against the pandemic.

“The norm is Holyrood and the exception and annoying other layer of bureaucracy that we have to deal with is Westminster,” he said.

There are still young people fighting for Scotland’s future within the union. Jack Norquay, now 22, was a teenage activist in the Better Together campaign in 2014 on the Orkney Islands off the north coast of Scotland.

In his region, a Liberal Democrat stronghold, people feel just as disconnected from Edinburgh as they do London, he said. However, the Brexit vote has made many of his pro-UK cohort look at Scottish independence. “People are more open to the idea than they used to be,” he said. “Possibly not solidly ‘yes’, but more open minded.”

Young independence supporters are not unaware of the warnings that leaving the UK could be financially ruinous and unleash years of negotiations on forming a new state. But, for some, any dire predictions are less relevant after Brexit went ahead despite warnings of the economic consequences.

The SNP welcomed Gupta as he expanded his metals and energy business; it also gave government guarantees for the £330m deal
Opinion
2 weeks ago