The announcement comes a day after a party revolt 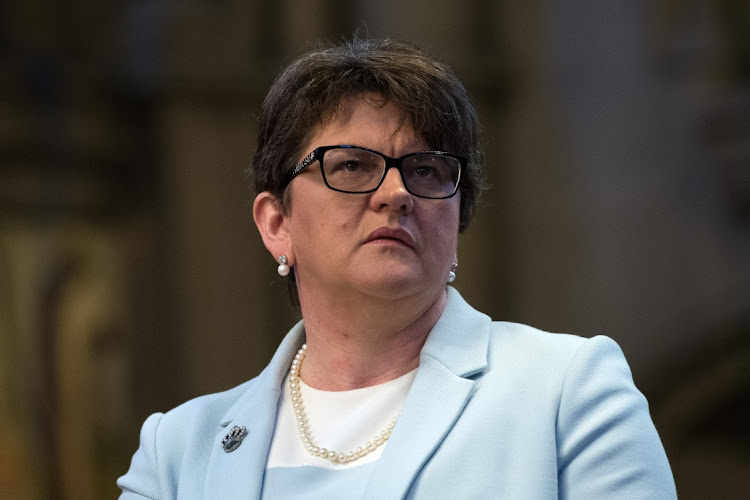 Belfast — Arlene Foster is to step down as Northern Ireland's first minister at the end of June, bowing to pressure from members of her Democratic Unionist Party (DUP) unhappy at her leadership over Brexit and social issues.

Her announcement adds to instability in the British province, where angry young pro-British loyalists rioted in recent weeks over the perceived growing power of Irish nationalists and post-Brexit trade barriers with the rest of the UK.

Foster, who took power in 2016, said in a statement that she would also step down as party leader on May 28.

Her leadership of Northern Ireland was “the privilege of my life”, she said.

The announcement comes a day after a majority of DUP MPs signed a letter seeking a no-confidence vote in Foster, who many blame for mishandling Brexit negotiations.

Foster resisted compromise on the terms of Britain's exit from the EU when her party wielded huge power in propping up the government of former British prime minister Theresa May.

Foster's decision to throw DUP support behind May's successor Boris Johnson then backfired spectacularly when he broke the party's “blood red line” and agreed to Brussels' demand for trade barriers between Northern Ireland and the rest of the UK.

The resulting Northern Ireland Protocol leaves Northern Ireland within the EU's trading sphere, avoiding a hard border on the island of Ireland but infuriating pro-British unionists by undermining the region's cherished place in the UK.

Though Foster has repeatedly called on the EU to scrap the protocol — something it says it will not do — some party figures have demanded an even harder line.

Others have complained that she is too liberal for what is one of the most socially conservative political parties in Europe and that her opposition to gay rights and women's' rights is not stringent enough.

But it was unclear how a new leader might shift the political fortunes of the DUP, which has been losing support to both the moderate cross community Alliance Party and the small hardline Traditional Unionist Voice (TUV).

“There isn't a clear ideological direction for the party to go in and that's the problem with this coup,” said Jon Tonge, politics professor at the University of Liverpool.

A harder line from a new leader on either Brexit or social issues could destabilise Northern Ireland's power-sharing government that the DUP leads with Irish nationalist rivals Sinn Fein under the terms of the 1998 peace deal that ended three decades of political and sectarian bloodshed between pro-British unionists and Irish nationalists.

“Sinn Féin will work with all parties to progress social reform, political change and economic prosperity — but we will robustly oppose damaging policies or regressive throwback politics of the past,” Sinn Fein's Northern Ireland leader Michelle O'Neill said in a statement.

Leaders call for calm after week of violence in Northern Ireland