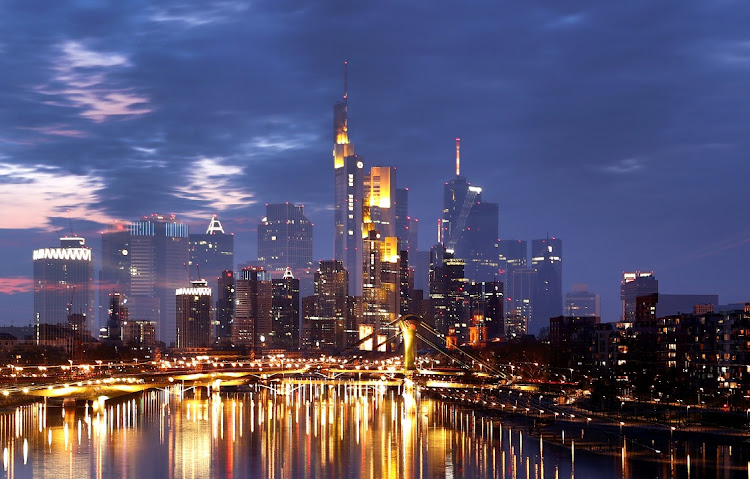 The skyline is photographed during sunset as the spread of the coronavirus disease (COVID-19) continues in Frankfurt, Germany, April 18 2021. Picture: REUTERS/KAI PFAFFENBACH

Western Europe is beginning to loosen restrictions meant to contain the coronavirus, offering relief for the pandemic-weary region as vaccination programmes turn the corner.

Italy will ease many restrictions on Monday, Greece will follow suit in early May and Germany is mulling privileges for people who have been immunised. Later on Thursday, French Prime Minister Jean Castex will announce the next steps for the country amid plans to lift certain restrictions on travel and outdoor dining.

After a slow start to inoculation programmes, Western Europe is starting to see progress in protecting its people against Covid-19, which has caused more than 640,000 deaths across the continent.

As supplies increase, Germany may be in a position to lift vaccination prioritisation by June, a step that would open access to all adults, according to health minister Jens Spahn.

“If it’s earlier than that, then I will be pleased but we shouldn’t raise expectations,” Spahn said in a speech to the upper house of parliament on Thursday.

As the pace of contagion slows in Italy, Prime Minister Mario Draghi’s government is restoring free travel between moderate-risk regions, and people can go to more at-risk areas under certain conditions, including a pass certifying vaccination. Bars and restaurants will also be allowed to open outdoor areas, according to the new rules.

In France, curbs on inter-regional travel will be lifted on May 3, four weeks after they were announced by President Emmanuel Macron. But a curfew between 7pm and 6am will remain in place, a government spokesperson said ahead of Castex’s address.

Greece will ease its main pandemic restrictions — including allowing outdoor dining — in early May, ahead of the country’s opening to international travel in the middle of the month, Prime Minister Kyriakos Mitsotakis said on Wednesday. Tourism is one of the country’s most important industries, accounting for about a fifth of the economy and more than a quarter of jobs.

To accelerate immunisation, Greece will start administering unused doses of AstraZeneca’s vaccine to people between 30 and 39 years old.

While Germany’s contagion rate has stabilised in recent days, it is still well-above levels the government has determined to be manageable and the number of patients in intensive-care facilities continues to rise.

Vaccine progress also varies widely across the continent, casting doubt over the timing of reopening in some countries, especially in the east.

While the island nation of Malta has already administered 67 doses per 100 adults, Bulgaria is only at 11 doses per 100. The average for the whole EU is 31.6, with countries including Hungary, Estonia and Denmark leading the push, and Latvia and Croatia among those lagging behind.