Response to foreign interference will be asymmetric, quick and harsh, says president 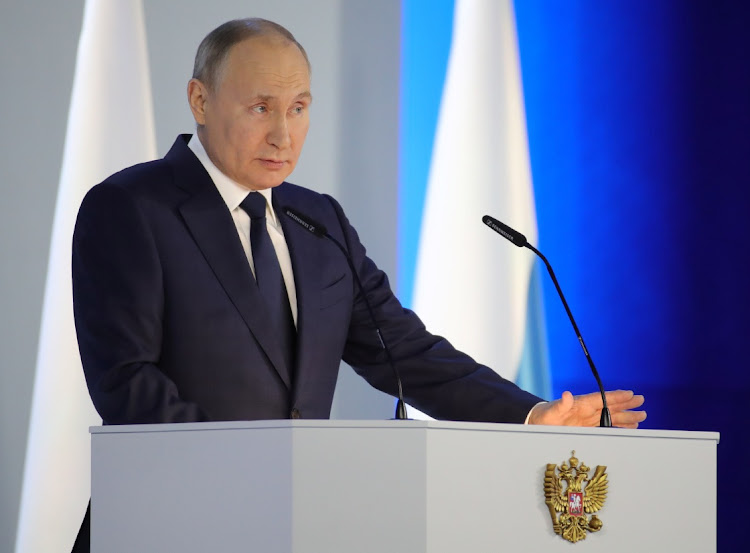 President Vladimir Putin has warned rival nations not to cross Russia’s “red line” or they would face a tough response, while holding out an offer of strategic talks amid spiralling tensions with the West.

“Organisers of any provocations against Russia will regret it more than ever before,” Putin said in his annual state of the nation speech on Wednesday. “Russia’s response will be asymmetric, quick and harsh.”

The Russian president didn’t single out any countries for criticism, saying Russia would decide where its red lines lie on a case-by-case basis. Touting Russia’s new nuclear weapons, he renewed an offer for talks with other world powers to increase strategic stability.

The rouble gained against the dollar at the end of the speech, which some observers had feared might include major new confrontational foreign policy moves. President Joe Biden and Putin are discussing a US offer for a summit even after the American leader last week imposed new sanctions on Russia, including measures targeting sovereign debt.

With parliamentary elections due in September, Putin devoted most of the address to domestic issues, promising expanded government benefits and more spending on infrastructure to boost flagging living standards.

He spoke as a crackdown took place on opposition protests demanding the release of jailed Kremlin critic Alexey Navalny. The opposition leader’s failing health has become the latest flashpoint with the West amid US and European alarm at an unprecedented Russian troop build-up on Ukraine’s borders.

Putin, who said pressure on Russia has become “a new form of sport”, harshly criticised an alleged coup attempt in Belarus involving a plot to kill Kremlin ally President Alexander Lukashenko. Russia says the plot was hatched in consultation with the US. Washington denies involvement.

“The practice of organising coups, political assassinations including of top officials, that’s going too far,” Putin said. “They’ve overstepped all the boundaries.”

The Russian leader remains broadly popular and Kremlin efforts to discredit and pressure the opposition have succeeded in blunting Navalny’s appeal, with polls showing nearly half of Russians say he was rightly imprisoned. The 44-year-old opposition leader survived chemical poisoning last year, which he and Western governments blamed on the Kremlin. The accusations are rejected by Russian officials.

The authorities have warned they will crush the unsanctioned rallies, the first called by the opposition since Navalny was sentenced to 30 months in prison in February. Police rounded up key activists in several Russian cities, according to the OVD-Info monitoring group, ahead of the demonstrations, which began in the Russian Far East as Putin started his speech at noon in Moscow. Police detained 10 people in Magadan, OVD-Info reported.

Navalny’s camp called the protest after warning that he is close to death in prison following three weeks on hunger strike to demand access to outside doctors. On Monday, authorities announced they had transferred him to a prison hospital. The Kremlin’s human rights ombudsman, Tatiana Moskalkova, said on Wednesday that Navalny’s life is not at risk and that he is getting all necessary care, including an intravenous drip.

More than 465,000 people have pledged anonymously to take part in demonstrations calling for Navalny’s release, which are scheduled for 7pm local time in all of Russia’s 11 time zones.

The US and the EU warned ahead of Putin’s speech that Russia will be held responsible if Navalny dies.

The protests are a test of the opposition movement’s viability after many of its leaders were arrested or fled abroad when the authorities moved to crush rallies against Navalny’s detention and trial earlier this year.

Russian prosecutors this month asked a Moscow court to declare Navalny’s Anti-Corruption Foundation and his campaign offices as extremist organisations, which could subject staff and volunteers to criminal prosecution and imprisonment.