Alexei Navalny's spokesperson, Kira Yarmysh, and ally Lyubov Sobol were detained near their homes in Moscow hours before a rally near the Kremlin 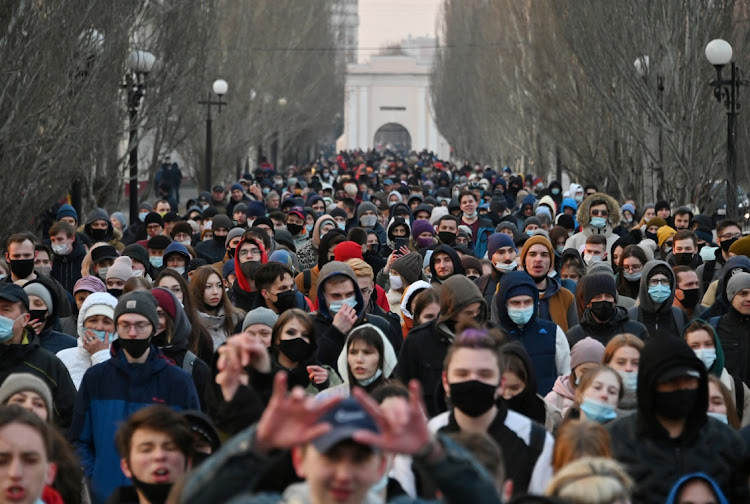 Supporters of President Vladimir Putin’s most outspoken opponent fear he could die soon and are demanding he be given proper medical care. Officials say he has been treated as any other convict would be, and have warned the rallies are illegal.

The confrontation over Navalny’s fate has become another flashpoint in Moscow's dire relations with the West, already aggravated by economic sanctions, diplomatic expulsions and a Russian military build-up near Ukraine.

OVD-Info, a group that monitors protests and detentions, said that 199 people had been detained over the rallies in dozens of different places. The figure was expected to climb.

Navalny's spokesperson, Kira Yarmysh, and close ally Lyubov Sobol were detained near their homes in Moscow hours before a rally in the Russian capital was set to converge on a square near the Kremlin.

In Russia’s Far East, about 200 to 300 people came out to support Navalny in the city of Vladivostok, some of them toting banners saying “Freedom for political prisoners” and “No war, repressions and torture!”

“Everyone realises the current authorities have nothing new to propose for the country. We need a new generation of politicians. I see Navalny as one of them,” said Ilya, a 19-year-old student.

Protesters there relocated to a square by the train station as an array of police vans had been brought into the central square where they had planned to gather.

Dozens of police vans were deployed to the centre of Moscow. The square where activists had hoped to gather was cordoned off with metal barriers, as was Red Square, footage on TV channel Rain showed.

Navalny's allies said they would gather first at two other locations in central Moscow.

European Council president Charles Michel said it was “deplorable” that Navalny's closest allies had been taken into custody ahead of the protests.

Another Navalny aide, Ruslan Shaveddinov, tweeted: “Right now across the whole of Russia they are detaining potential protesters. This is repression. This cannot be accepted. We need to fight this darkness.”

Authorities are responsible for the health of Kremlin critic, top diplomat Josep Borrell says
World
2 weeks ago
Next Article