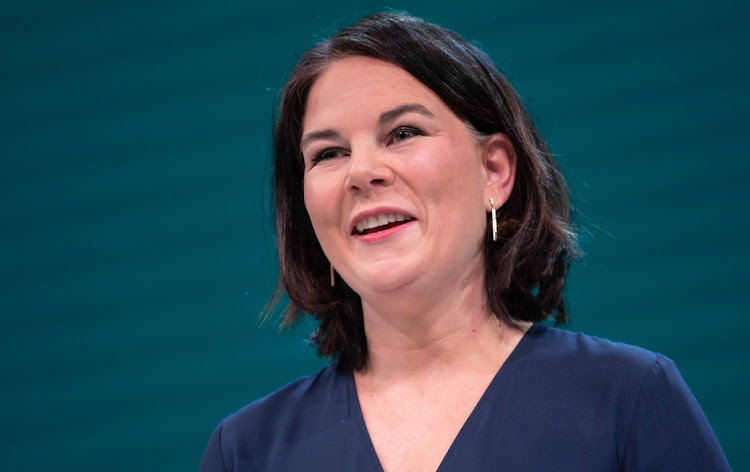 Berlin — Germany’s Greens drew a sharp contrast to their bickering conservative rivals in the contest to succeed Angela Merkel as chancellor, proposing Annalena Baerbock as their lead candidate for September’s national election.

The party, which is nipping at the heels of Merkel’s Christian Democrat-led bloc, picked the 40-year-old political scientist and foreign-policy expert to run their campaign. It was a smooth, well-orchestrated process, compared with the messy spectacle that has split the conservative alliance.

“Today, we start a new chapter for our party, and if we do this well, also for our country,” said Baerbock, who is bidding to become Germany’s youngest-ever chancellor. “I stand for renewal. Others represent the status quo.”

The nomination makes Baerbock, who like Merkel represents a constituency in the former communist East, the top rival for the Christian Democrat-led group, which has yet to choose its own candidate amid a tense power struggle between the two parties in their alliance.

In contrast to the drawn-out, acrimonious battle for the conservative chancellor candidacy, the process for the Greens was orderly. The timing of the announcement, which was made internally before Easter and kept under wraps until Monday, was flagged well in advance and agreed without public tension.

She was warmly presented as the Greens’ first official chancellor candidate by co-leader Robert Habeck, who came up short.

“Annalena Baerbock is a focused and strong-willed woman who knows what she wants,” he said.

She made reference both to the “mudslinging” that has plagued the conservative chancellor nomination and to allegations that some legislators from Merkel’s bloc took advantage of the pandemic to enrich themselves via lucrative contracts for medical equipment.

“Trust in democracy, in politics as a whole is threatened,” she told reporters. “That is a great cause of concern to me.”

Germany’s transition to the post-Merkel era, which will officially be ushered by the September election, has already been fraught. Her conservative bloc is mired in a disorderly showdown between Armin Laschet, the leader of her Christian Democrats, and Markus Söder, the Bavarian leader who’s waging an upstart challenge. The extended standoff, which could be voted on by the group’s parliamentary caucus on Tuesday, risks damaging the traditional anchor of German political stability.

Finance minister Olaf Scholz is running for the Social Democrats. The labour-friendly party was Germany’s second-strongest political force but has been damaged after years as a junior partner in Merkel governments. It’s now a distant third in the polls.

The Greens stand to play a key role in Germany’s next administration and could elevate the environmental movements across Europe. On top of worries about global warming and frustration with the conservatives, the opposition party could benefit from voter ire over the government’s handling of the coronavirus pandemic.

Baerbock, a legislator from Brandenburg, became joint party leader in January 2018. By appealing to city voters with a pragmatic approach to fighting climate change, she’s helped revive the Greens, which were a distant sixth place in the 2017 election.

She would become the country’s second female chancellor if results go her way. But even with Merkel’s CDU/CSU bloc struggling, the likeliest outcome is a junior role in a conservative-led government, according to the latest polls.

“We run this campaign so that we can lead this country into the future,” said Baerbock. “Naturally for this to happen, we will have to reach the mainstream of society.”

She’s the only woman in the chancellor race after a rapid rise from a back-room functionary who failed to get elected in 2009.

Recent wins in regional elections in Rhineland-Palatine and in Baden-Wuerttemberg — where the Green candidate was elected to a third term as state premier — have given the party additional momentum. The Greens have only governed at federal level once before — as junior partners under Gerhard Schroeder of the Social Democrats — but are now part of 11 regional governments.

A former competitive trampolinist, Baerbock studied international law at the London School of Economics and political science and public law in Hamburg. While she’s from the party’s moderate wing — a “realo” — the campaign programme bears signs of its more radical roots.

The platform calls for changing the mandate of the European Central Bank to promote jobs rather than just maintaining price stability.

The cornerstone of the party’s campaign involves a plan to invest €50bn a year in a digital, environmental transformation of Europe’s largest economy.

They would fund the spending — equivalent to an annual boost of about 1.5% to national output — with steeper taxes on the wealthy and higher costs for polluting.

One of the most controversial policies could be plans to reform Germany’s constitutional debt limits. The proposal calls for investment to be treated as public assets, allowing the state to take on more debt and take advantage of low interest rates.

“Tackling climate change is the task of our time, the task of our generation,” said Baerbock, a mother of two who said she was fighting global warming so she could become a grandmother one day.

Reading out e-mails from some threatening to leave a party; sarcasm; accusations of flip-flopping — German politics is not holding back
World
7 months ago