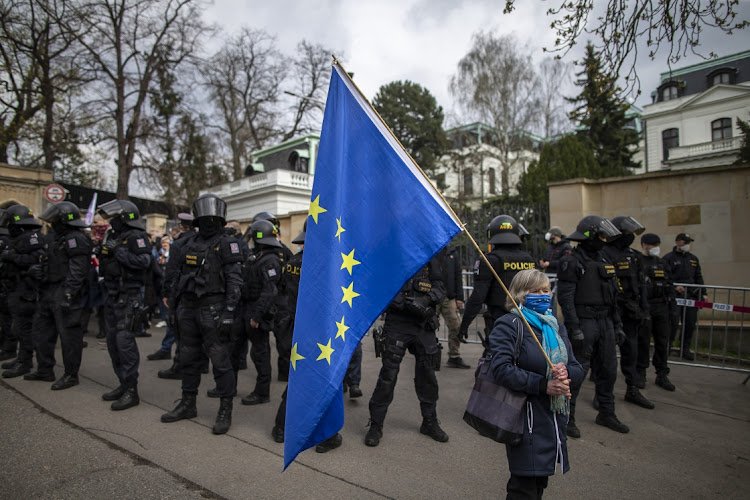 Prague — Russia rejected the Czech government’s allegations that it was involved in a deadly blast at a munitions site in 2014, sending home 20 Czech diplomats for the expulsion of 18 staffers from its embassy in Prague.

Czech Prime Minister Andrej Babis’s unexpected announcement late on Saturday coincides with growing concern in the US and Europe about Russia’s military build-up on the border with Ukraine and treatment of jailed opposition leader Alexei Navalney.

Foreign minister Jan Hamacek likened the explosion, which killed two people at a private munitions warehouse, to the 2018 poisoning of former Russian agent Sergei Skripal in Salisbury, England. Moscow said the accusations are “beyond absurd”.

“We are expressing our firm protest to the Czech authorities,” the Russian foreign ministry said in a statement on Sunday. “Our response will force the people behind these provocations to feel the full responsibility for their departure from the foundations of normal relations between our countries.”

The latest rift signals that relations between the Czech Republic, a member of Nato and the EU, and Russia may be headed towards the lowest point since the end of communist rule. This could have business consequences too: Czech officials said Russia probably won’t be allowed to bid for a $7bn nuclear-energy project as a result of the incident.

Russia summoned the Czech ambassador, Vitezslav Pivonka, on Sunday, the Interfax news service reported, citing an unidentified person with knowledge of the matter. Reports said 20 Czech diplomats had been expelled in retaliation.

“I’m very saddened that the Czech-Russian relations are going to suffer such significant damage, but the Czech Republic must respond,” Hamacek said Saturday. The Czech government has notified the EU and Nato and is seeking their support, he said.

Czech police said Saturday they’re searching for two men who visited the country using Russian passports with the same names that UK police have said they believe to be aliases of GRU agents who poisoned Skripal four years later.

The men used the identities of Alexander Petrov and Ruslan Boshirov, as well as passports with other names, when they travelled within the Czech Republic for about a week in October 2014. They are wanted in connection with “serious criminal activity”, according to a police statement that didn’t elaborate.

The latest accusations risk escalating tension between Prague and Moscow to the highest level since the former Soviet satellite overthrew communist rule more than three decades ago. Relations have since included diplomatic clashes, such as when the Czechs expelled two Russian diplomats last year for what Prague said was fabrication of information on an alleged poisoning plot against municipal officials.