The government has spent more than €130bn so far to support the economy, with Italy in and out of Covid-19 lockdowns for more than a year 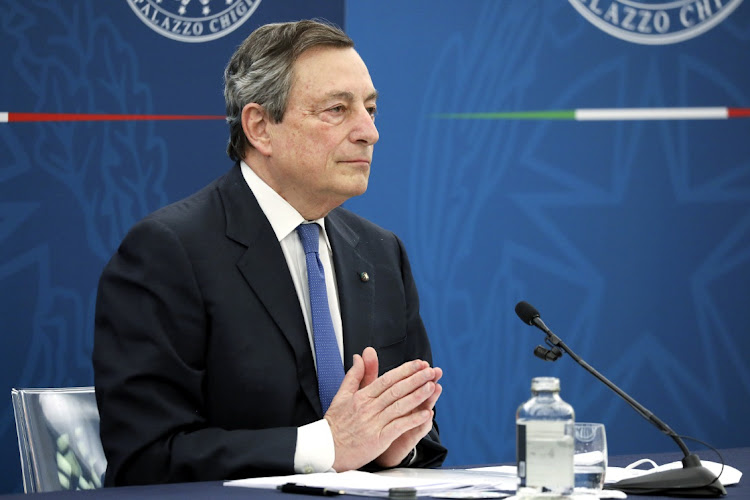 Rome — Italian Prime Minister Mario Draghi is bringing forward plans for as much as €40bn in new borrowing as the cost of keeping the economy afloat drains the state’s coffers and street protests heap pressure on the government, according to two people familiar with the matter.

The government will need between €35bn and €40bn to cover all the country’s needs, from maintaining furloughs to sustaining help for businesses and families, the people said, asking not to be identified as discussions are confidential. A spokesperson for Draghi declined to comment.

Italian bonds fell after the report, with the yields on 10-year debt climbing as much as five basis points to 0.71%, the highest level since March 30. The spread over similar-dated German securities, a key gauge of risk for the country, also rose.

Italy was one of the first countries hit by the coronavirus pandemic and its economy has been badly hurt with output falling almost 9% in 2020. The government has spent more than €130bn so far to support the economy, which has pushed public debt to 155.6% of GDP.

Earlier this week in Rome, restaurant owners and other angry businesspeople clashed with police in protests demanding a loosening of lockdowns and more economic help, while in southern Italy hundreds of demonstrators blocked a highway.

The Italian economy has been in and out of lockdowns for more than a year and the government closed restaurants and bars earlier in April. Restrictions may be eased slightly for much of the country later on Friday.

Draghi is also under pressure from within his governing coalition to be generous with new support measures. League leader Matteo Salvini has said the government should spend up to €100bn if necessary and members of the government, including public administration minister Renato Brunetta, have also pushed for higher spending.

The last package of economic support passed in March was worth €32bn and Draghi said on Thursday that the new package will be greater than the previous one, without giving details.

The government is also struggling to ramp up its vaccination programme. Draghi had pledged Italy would be immunising half a million people a day by mid-April but was forced to push that objective back to the end of the month after delays in the delivery of shots.

Draghi now says he plans to reach 80% vaccine coverage by the end of September.

Talks focus on closer co-operation, trade and countering human trafficking across the Mediterranean
World
3 months ago

Italy has been devastated by the pandemic, both in loss of life and economically and is in its worst recession since World War 2
World
5 months ago
Next Article