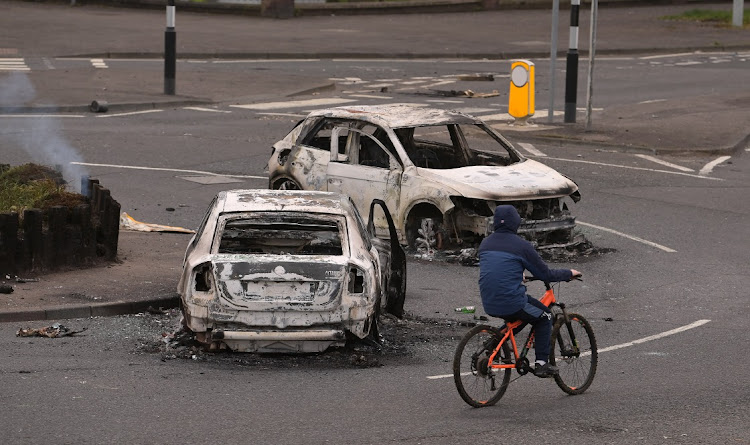 Dublin — Violent clashes in erupted over the weekend in pro-British parts of Northern Ireland amid rising post-Brexit tensions in the region.

Cars were set alight and masked people pelted a police van with petrol bombs on Sunday in the third successive day of unrest in the cities of Belfast and Londonderry.

Many pro-British unionists fiercely oppose the new trade barriers introduced between Northern Ireland and the rest of the UK, called the Northern Ireland Protocol, as part of Britain's departure from the EU and have warned that their unease could lead to violence. The protocol creates a de facto border that requires goods entering Northern Ireland from Britain to be subjected to EU checks.

Political leaders, including Britain's Northern Ireland minister, appealed for calm at the weekend.

A video posted on Twitter by the Police Federation for Northern Ireland showed masked individuals flinging petrol bombs from close range at an armoured police van, which they also kicked and punched.

Fifteen officers were injured in the Sandy Row area of Belfast on Friday when a small local protest developed into a riot. Police said the rioters attacked them with masonry, metal rods, fireworks and manhole covers.

The injuries included burns, head wounds and a broken leg, resulting in the arrest and charging of seven people, two of them as young as 13 and 14. Twelve officers were also injured in separate rioting on Friday in the city of Londonderry.

"By their words and actions they have sent a very dangerous message to young people in loyalist areas," Gerry Kelly, an MP from Sinn Fein party, which shares power in the devolved government with the DUP, said in a statement.

DUP MP Christopher Stalford said rioters were "acting out of frustration" after prosecutors opted not to charge any members of Sinn Fein last week for alleged breaches of Covid-19 restrictions.

The DUP have called for the head of the police force to resign over the issue.

The British-run region remains deeply split along sectarian lines, 23 years after a peace deal largely ended three decades of bloodshed. Many Catholic nationalists aspire to unification with Ireland while Protestant unionists want to stay in the UK.

As more spending flows through regional bodies, Westminster needs to strengthen scrutiny. Instead, the message from the top is: to the victor, the ...
Opinion
2 weeks ago