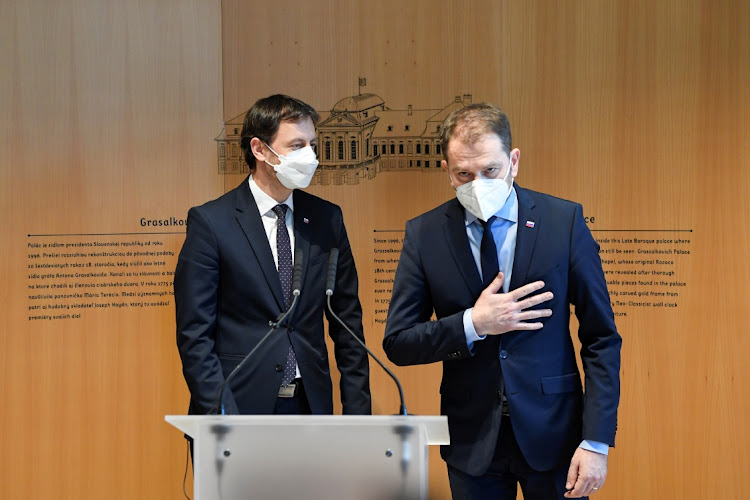 Prague —  Slovak Prime Minister Igor Matovic resigned on Tuesday, opening the way to forming a new government after a month-long political crisis sparked by a dispute over use of Russian coronavirus vaccines.

All four parties in the ruling coalition have agreed to participate in a new cabinet with Heger at the helm, while Matovic will take the finance portfolio.

Matovic offered the swap to appease his coalition partners after a series of disputes that boiled over at the start of March, when Matovic secretly ordered a shipment of Russian Covid-19 vaccines his partners had opposed because they lack clearance for usage in the EU.

Matovic was keen to boost vaccinations as the country of 5.5-million was slowly emerging from its worst wave of the pandemic, which has filled hospitals and put Slovakia among Europe's worst-hit countries in recent weeks.

With Matovic and his main rival, Freedom and Solidarity (SaS) leader Richard Sulik — both outspoken firebrands — in the new government, the truce among the parties may be shaky.

“It could be even less stable, because besides the conflict line between Matovic and Sulik, another could appear within Olano between Matovic as chair and Heger as the prime minister,” said political scientist Tomas Nociar.

Heger was a manager and parliamentary deputy from Matovic's Olano party from 2016 to 2020, when he took over the finance portfolio.

Olano won the election a year ago with an anti-corruption agenda after the murder of an investigative journalist and his fiancée in 2018. A series of investigations have started since it came to power.

German biotech company’s chief says the company is developing a vaccine that can be stored in a fridge and a freeze-dried version useful for ...
Companies
2 weeks ago