Experience of poor treatment combined with historic abuse and discrimination by the medical establishment have led to mistrust, experts say 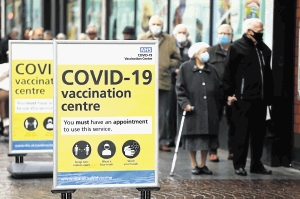 A queue for the AstraZeneca vaccination in Folkestone this week in Kent, south-east England. Picture: BLOOMBERG/CHRIS RATCLIFFE

London — The UK’s rapid Covid-19 vaccination programme made the country a global pacesetter. But while more than 30-million British adults have had at least one dose, take-up is significantly lower in black and Asian communities, raising the risk of ongoing illness and death in some of the country’s most ethnically diverse and underprivileged areas.

Official data released on Monday revealed that just 59% of black African adults in England aged over 70 years had received at least one shot, compared to about 91% of white people and a rate below 75% in England’s Pakistani and Bangladeshi communities. The figures back up analysis of health records by OpenSafely, a doctor-led data project, which shows that gaps in coverage have narrowed only slightly since January.

Personal experience of poor treatment, combined with historic abuse and discrimination by the medical establishment, have led to mistrust, experts say. There are questions over potential side effects and language barriers, while misinformation has also sowed doubt, ranging from unfounded safety concerns to falsehoods suggesting that vaccines contain traces of alcohol or meat products. Some people may be willing to have the vaccine, but face access hurdles.

“It’s a really complicated story that has many layers,” said Winston Morgan, a researcher at the University of East London who talks to black pastors, nursing students and others to address concerns. “All of these things you have to overcome.”

The situation is worrying local health officials in some of England’s most ethnically diverse areas, where two waves of Covid-19 have crashed over the past year. A Bloomberg analysis of government data shows that death rates tend to be higher — and vaccination rates lower — in areas where fewer than 60% of people are white.

The UK government hit an early goal of offering a first dose to anyone aged 70 years and older in mid-February. Yet overall vaccination rates for people in their 70s remain below 90% in 10 London healthcare districts, according to NHS data, and 24 districts across England have vaccinated less than 90% of people aged 80 or over. Many of those areas include some of England’s poorest, most multiracial communities.

If the pattern of low take-up in deprived, diverse areas persists it would allow the coronavirus to keep circulating even as it is driven out of more affluent places, leaving black and Asian communities at risk of infection longer than much of the rest of the UK. New and potentially dangerous variants could prolong the pain.

Persuading people to embrace the vaccine depends on faith in both the government and the health service, said Morgan. “In a lot of communities described as hesitant they don’t have that trust.”

In districts such as Newham, in east London, which suffered almost 456 deaths per 100,000 people over the past 12 months — the highest in England and more than twice the national average — vaccines are seen as a way to avert even more agony. Black, Asian and minority ethnic communities make up roughly three-quarters of Newham’s population.

“If we want to stop transmission altogether we need to aspire to have the highest vaccine rates in places like this, not accept that they will be a bit lower,” said Jason Strelitz, Newham’s public health director.

“Nationally the vaccine strategy so far is a huge success. But to get it right in the next phase we’ll need to put additional resources and effort into areas of low take-up.”

Local community organisations and the government are trying to narrow the gaps as lockdowns ease. That means transforming places such as the Redeemed Christian Church of God, in the Newham neighbourhood of Stratford, into local vaccine clinics. One day last week more than two dozen people were booked to receive the shot there.

Providing Covid-19 shots at places of worship, which play a central role in many communities and are close to peoples’ homes, is part of an effort to raise confidence. Like other boroughs, Newham has opened pop-up centres in churches, mosques, Sikh gurdwaras and Hindu temples.

While some are keen, others in the black community are “watching and waiting,” said Olufemi Daramola, a local doctor and congregant at the Stratford church helping with the vaccinations. “My worry is that more people will catch it,” he said of the coming weeks and months. “But this might help boost uptake.”

The pandemic has already had a disproportionate affect on black and South Asian people in particular. Cases and deaths from Covid-19 in black African or black Caribbean communities have been running at about double the rate for white communities, government data show.

Earlier in 2021, the UK committed more than £23m to help expand vaccine access in areas of higher risk, targeting minority communities and areas of deprivation in particular. The government has pointed to initiatives, including WhatsApp groups sharing messages from religious figures and “vaccine buses” that bring shots to harder-to-reach areas.

“We’ve had two tsunamis — short, sharp and devastating,” said Adeola Agbebiyi, a Newham public health consultant who is part of the vaccination drive. “For our population who have experienced many bereavements and much trauma because of Covid-19 over the past year, it’s important. Demographically they’re more likely to be exposed and to die. So individual-level protection is huge.”

Across the city, in northwest London, Raja Amjid Riaz oversees a regular clinic to administer the AstraZeneca and University of Oxford vaccine at the Central Mosque of Brent. While generally positive, Riaz said take-up has been “very poor” in groups including the local Afghan, Somali and black African communities.

About two-thirds of the population in Brent are from black, Asian and minority ethnic groups. Brent had the highest Covid-19 death rate between March 2020 and June 2020, followed by Newham, as people with lower-paid jobs, poor housing and health conditions suffered the most.

“Covid-19 highlights a major issue in UK society — unfortunately it has hit the poor and black and minority ethnic communities quite badly,” Riaz said. “The major way out of the pandemic now is through vaccination.”

Sapna Chadha, a volunteer at the brick mosque on the edge of the train line in Willesden Green, said she worries about pockets of people at the local level who are still susceptible to the virus while the UK succeeds nationally.

There’s a lot at stake for Britain, which faced intense criticism for missteps earlier in the pandemic but has moved swiftly in securing and distributing vaccines. The UK has given more than 45% of its total population at least one dose, according to Bloomberg’s vaccine tracker. That compares with about 29% for the US and 10% for the EU.

As the coronavirus continues to circulate, the more chance it has to mutate and evade the immunity provided by vaccines or a past infection. Getting to a level at which enough people are immune that the virus can no longer spread will depend on ensuring all groups have access. That “herd immunity” mark could be at about 70% to 85% of the population, though the exact level is unclear.

Just as communities start to see progress, they’ve been hit by other factors beyond their control. The UK is involved in an ongoing tussle over vaccine supply with the EU; separately, the country faces a looming four-week supply crunch. That “massively” changed the plan for April, making it difficult to predict how many doses Newham will receive, said Strelitz, the health director.

Some people also cancelled appointments after concerns about blood clots prompted a string of European nations to temporarily suspend immunisations using the AstraZeneca vaccine, he said.

When the doses begin to flow again, getting younger adults to roll up their sleeves will be another challenge. Some in that generation see themselves as less vulnerable, or are less confident in vaccines, Strelitz said. Others will have work commitments that make it harder to book appointments, he added.

Morgan, the east London academic, specialises in toxicology and also studies factors that contribute to poor medical outcomes. The UK vaccine system may be overlooking people who disregard text message invites or consider unsolicited letters as spam, especially if they don’t regularly see a doctor, he said. Some may want a personal invitation.

The gaps between ethnic groups appear to be narrowing slowly, though not as fast as everyone wants. “People still aren’t getting the information they need,” Morgan said.

“They’re not totally against taking the vaccine. They just want to be reassured, and that reassurance has to come from people they know and trust.”

The French health minister says the profile of patients is changing with more young people being admitted as more than 65,000 new cases were reported ...
World
4 weeks ago

Starting in hard-hit Lombardy, the algorithm, designed by scientists over the past year, reduces any element of political discretion
World
4 weeks ago
Next Article