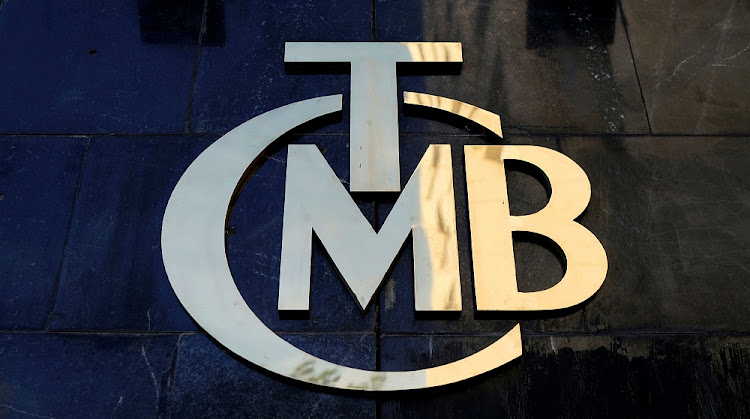 A logo of Turkey's Central Bank (TCMB) is pictured at the entrance of the bank's headquarters in Ankara, Turkey. REUTERS/UMIT BEKTAS

Ankara — With President Recep Tayyip Erdogan’s sacking of his third central bank governor in less than two years, Turkey’s dominant political leader of the past century has demonstrated yet again his determination to fight the conventions of modern economics.

Investor flight drove the lira down as much as 15% on Monday, adding to losses that have kept inflation in double digits for the past 16 months. The currency was little changed in early Tuesday trading. The yield on 10-year lira bonds rose by the most on record and stocks extended losses after their steepest slide since 2013.

“This is a sudden stop in capital flows,” similar to the currency meltdown in 2018, said Robin Brooks, chief economist of the Institute of International Finance in Washington. “The result back then was a deep recession due to tighter financial conditions. It’ll be the same now.”

Erdogan’s decision to fire Naci Agbal as central bank governor on Saturday followed a stunning 200-basis point interest-rate increase last week that drove the benchmark rate to 19%. In his four months in the office, Agbal had lifted the gauge by a cumulative 875 basis points,  a direct contrast to the president’s unusual belief that higher borrowing costs fuel inflation. His moves helped stabilise the currency and attract investment.

While the Turkish president was looking at a year of strong growth and a stable lira as recently as last Thursday, his actions over the weekend have made Turkey a tougher sell to foreign investors. They are critical to helping finance the country’s current-account deficit, which exceeded $36bn in 2020.

The abrupt move at the central bank wrong-footed lira bulls who had come to believe in Erdogan’s apparent switch to mainstream economic policies in November, when he installed Agbal and appeared to cede to economic choices needed to contain spiralling prices that were eating into his popularity.

Erdogan has not addressed the matter since naming a new chief of monetary policy, Sahap Kavcioglu, a Marmara University economics professor. Kavcioglu has occasionally written in support of Erdogan’s unorthodox ideas on interest rates in his column in the pro-government Yeni Safak newspaper.

In comments on AHaber TV, senior presidential adviser Yigit Bulut said he had “just” spoken with Kavcioglu and that borrowing costs should remain as low as possible.

“Rates should be as low as economic realities allow,” Bulut said.

The appointment stoked fears of a rerun of monetary policies of the past two years, pushing the lira 7.5% lower to 7.8016 per dollar on Monday’s close in Istanbul. The currency did pare losses from as low as 8.35, with both state and private banks selling dollars from local investors, who saw the weak lira as an opportunity to take profit on dollar holdings, according to traders familiar with the flows.

State lenders did not appear to be defending a specific lira level as they did for much of the past two years when they were selling Turkey’s foreign FX reserves, the traders said, asking not to be identified, in line with their companies’ regulations.

The yield on Turkey’s 10-year lira bonds rose 21 basis points to 19.1% at 10.46am on Tuesday after jumping 484 basis points the previous day, the most in the 11 years since Turkey started selling those securities. Stocks slumped 7%, triggering circuit breakers that halted trading twice at the Borsa Istanbul within the first hour of trading.

The cost of borrowing the local currency for one week surged to as high as 2,067% on Monday as traders scrambled to get their hands on lira liquidity needed to unwind their long bets.

The approach under finance minister Berat Albayrak, Erdogan’s son-in-law who resigned from that position in November, was to use foreign reserves to prop up the lira. Goldman Sachs estimated that policy cost Turkey more than $100bn in lost assets, leaving little ammunition to defend the currency now.

“We will never turn bullish on the lira as long as Erdogan is effectively running the central bank,” Nordea Bank currencies and rates strategist Andreas Steno Larsen said on Twitter.

Turkey’s total gross reserves, including gold and reserves held by the central bank on behalf of commercial lenders, dropped 20% l to $85.2bn last year until Agbal’s appointment, while net foreign-exchange reserves fell by more than half to $19.6bn.

Turkish growth and portfolio inflows are closely correlated as strong domestic demand — traditionally the main driver of activity — usually results in a wide deficit in the country’s current-account balance.

Weakening inflows and intermittent bouts of currency weakness resulted in boom-and-bust cycles that saw GDP get stuck at under $800bn for much of the past decade. While Erdogan continued to win most elections in that period, his approval rating failed to recover from the 46% level seen in 2019, according to a February survey by Ankara-based pollster MetroPoll. That is when he suffered a most stinging electoral defeat, losing the mayor’s post in Istanbul to the opposition.

“Not many are surprised that Erdogan is snatching defeat from the jaws of victory. But to do it so quickly is remarkable even by his standards,” Renaissance Capital chief economist Charles Robertson wrote in a note to clients.

“In the long-term, Erdogan may have lost himself the 2023 election. But by then Turkey might be a frontier market or frontier emerging market.”

Dismissal of Naci Agbal, announced in the early hours of Saturday, shocks local and foreign investors
World
4 weeks ago