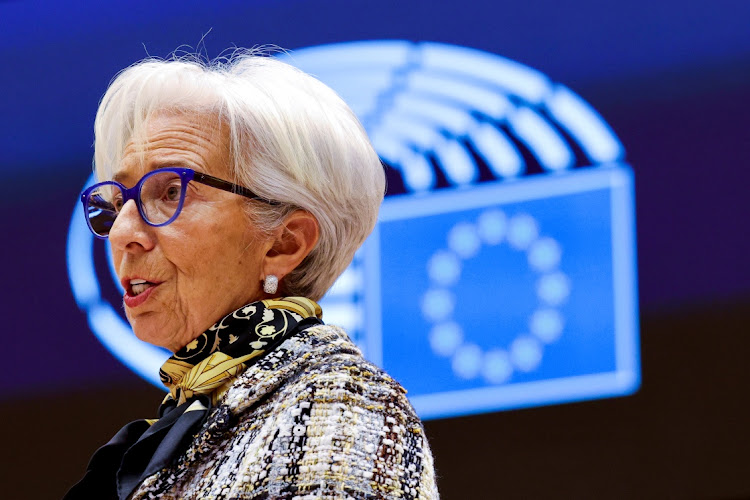 Brussels — The European Central Bank (ECB) finally delivered on its promise to boost the pace of emergency bond buying to combat the economic threat from higher yields.

Net purchases settled last week climbed by €21.1bn, the most since the start of December. That figure is reduced by redemptions — the gross value of purchases will be disclosed on Tuesday.

Policymakers decided earlier in March to significantly increase buying under the programme — due to run for at least another year — after a global bond sell-off spurred by reflation bets because of huge US fiscal stimulus. Officials fear that Europe’s extended virus lockdowns and a slow vaccination rollout mean it isn’t ready to cope with higher borrowing costs.

The faster purchases came after weeks in which some policymakers expressed their worry, yet official data showed no sizeable or sustained pickup in buying.

ECB president Christine Lagarde said in a blog post on Monday that the near-term outlook remains uncertain due to  the evolution of the Covid-19 pandemic and the speed of the vaccination campaign, and reiterated her promise to keep financing conditions favourable.

“We retain the option to adjust the pace of purchases at any point in time in response to potential changes in market conditions,” she said. “While much progress has been made and we can see light at the end of the tunnel, we cannot be complacent.”

Still, several officials have signalled that the increase in bond-buying is temporary, and will be reconsidered when updated economic projections will be available in June. Some Governing Council members are unperturbed by the rise in yields, believing it largely reflects optimism over the pending economic rebound.

Council member Klaas Knot suggested on Monday that policymakers could reduce the pace of purchases in the summer if the economy proceeds as expected. He also said they may be able to start discussions on how to unwind their unprecedented monetary stimulus later in 2021 if countries make sufficient progress on vaccinations.

“As long as we are in a situation with contact restrictions, it’s clear that the pandemic emergency purchase programme won’t stop,” Knot, who heads the Dutch central bank, said in a press conference. “But if we make good progress with vaccinations, that moment will come somewhere later this year.”

Knot’s outlook for the Dutch economy highlighted the struggles of the eurozone. He said his nation’s economy will probably shrink 1% in the first quarter and grow just 2.2% in 2021.

The situation is equally dire in neighbouring Germany. The Bundesbank on Monday predicted a sharp contraction in the first three months of 2021, arguing that measures to contain the coronavirus are stricter than in the previous quarter.

During talks on Monday, Chancellor Angela Merkel and regional leaders agreed to extend Germany’s lockdown until April 18 after Covid-19 contagion rates nearly doubled in a month.

The government said on Monday that it will take on just over €60bn more debt than initially planned to help mitigate the impact of the coronavirus crisis.

US 10-year treasury yield surges to 1.75% after Fed forecast