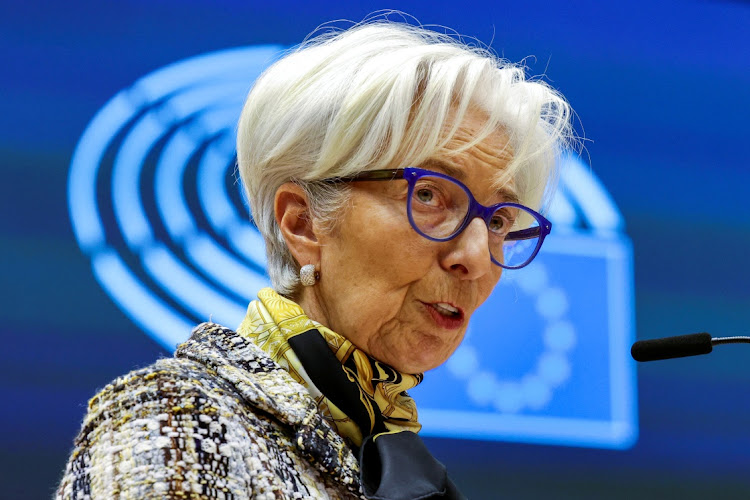 Lagarde said certain recent market moves would become “undesirable” if they persist, citing negative implications for the economy and inflation. She spoke after policymakers opted to accelerate government-debt buying.

“We will purchase flexibly according to market conditions and with a view to preventing a tightening of financing conditions,” she said.

The euro trimmed gains and eurozone bonds rallied after the ECB raised the stakes in its engagement with the debt market, employing a tactical shift aimed at ensuring rising yields don’t threaten to stifle the region’s economic pickup before it begins. Forecasts unveiled by Lagarde showed a recovery that will take hold in 2021, but over time.

“Ongoing vaccination campaigns, together with the gradual relaxation of containment measures — barring any further adverse developments related to the pandemic — underpin the expectation of a firm rebound in economic activity in the course of 2021,” she said.

The ECB’s action to nurture that pickup with a pledge to buy debt at a “significantly higher pace” in coming months further evolves the raison d’être of its pandemic purchase programme, a tool originally conceived as a bulwark against the disintegration of the eurozone during the coronavirus crisis.

The decision to more directly grapple with the pricing of government debt opens a new chapter in an already fraught relationship with fickle bond markets that have long troubled ECB presidents, not least since the region’s sovereign crisis struck more than a decade ago.

Lagarde spoke a year to the day since the global pandemic was confirmed. That was also the eve of her March 12 remark on spreads that rocked debt markets by appearing to undermine previous pledges to defend the integrity of the eurozone. It took the creation of its pandemic stimulus tool, now totalling €1.85-trillion, to rectify that error.

The meeting Lagarde chaired on Thursday offered policymakers the first formal opportunity to deliver a collective view on the dangers posed by the recent jump in bond yields around the world. ECB officials had hitherto revealed conflicting messages on the focus of their market monitoring.

That latter view was what officials opted for in an attempt to clarify their perception of the markets, as Lagarde revealed in her opening statement.

The forecasts Lagarde revealed on Thursday were similar to the institution’s last projections released in December, with officials foreseeing growth of 4% this year and inflation that never exceeds 1.5% in any of the coming years.

Beyond the near term, however, risks to the outlook are more balanced than they were.

The bill is a major political victory for the new president, who plans to sign the legislation on Friday
World
4 months ago