Italy has been devastated by the pandemic, both in loss of life and economically and is in its worst recession since World War 2 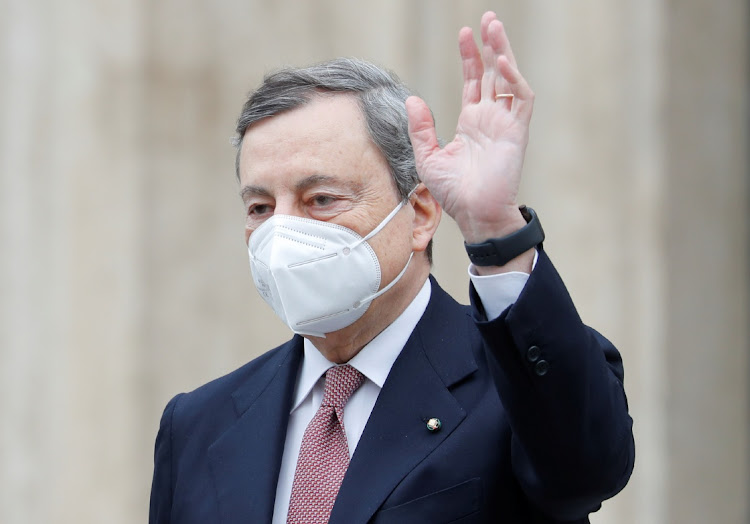 Rome — Prime Minister Mario Draghi has urged Italians to pull together in a historic effort to rebuild their country, comparing the task ahead to the post-war reconstruction, as he laid out the priorities for his new government.

“National states will remain the reference for citizens,” Draghi said, but “they will have to concede national sovereignty to gain a shared sovereignty.”

The newly installed premier said EU funds must be deployed to bolster economic growth across the continent. The former head of the European Central Bank’s initial speech in Rome’s Senate offered the first detailed presentation of his administration’s programme, ahead of ballots he’s set to win comfortably thanks to a broad coalition. Senators are due to vote at about 10pm, while lower house lawmakers will vote on Thursday evening.

Draghi’s speech repeatedly focused on the pro-European stamp of his government.

Saying his government will be firmly pro-European and Atlanticist, Draghi called the euro “irreversible”, in a warning to the handful of Euro-sceptics in some of the parties that have offered support. “Without Italy, there is no Europe,” he said. The speech was greeted with a standing ovation from most lawmakers.

As prime minister, Draghi is banking on speeding up Italy’s vaccination campaign to kick-start an economy crippled by the coronavirus pandemic as well as a year of national and regional lockdowns. The pandemic has claimed more than 90,000 lives in a country trapped in the worst recession since World War 2, with debt at almost 160% of output.

Draghi is set for a broad majority in the confidence ballots even if some members of the Five Star Movement, the biggest party in parliament, decide to vote against him or abstain. Five Star has been shaken by divisions among its members, with some holding fast to the party’s roots as a protest movement that railed against bankers and technocrats. Draghi would still have a majority even without any Five Star votes.

The show of unity for Draghi hasn’t prevented some political rivals from sniping at each other in the runup to the confidence measure. This week, Matteo Salvini of the rightist League ripped into health minister Roberto Speranza over the government’s last-minute U-turn that pushed the scheduled reopening of ski resorts from February 15 to at least March 5.

Market-friendly banker or central-authority saviour of the euro? Being a pragmatist, likely a bit of both
World
4 months ago

Draghi for the moment lacks a parliamentary majority, with several political groups saying they first want to see what his programme looks like
World
4 months ago

The vaccine rollout missteps, and her high representative gushing about the Russian vaccine, in Russia, are making EU leaders nervous
World
4 months ago
Next Article