European focus sparked conflicts within the government, while relying on European Commission hampered the rollout 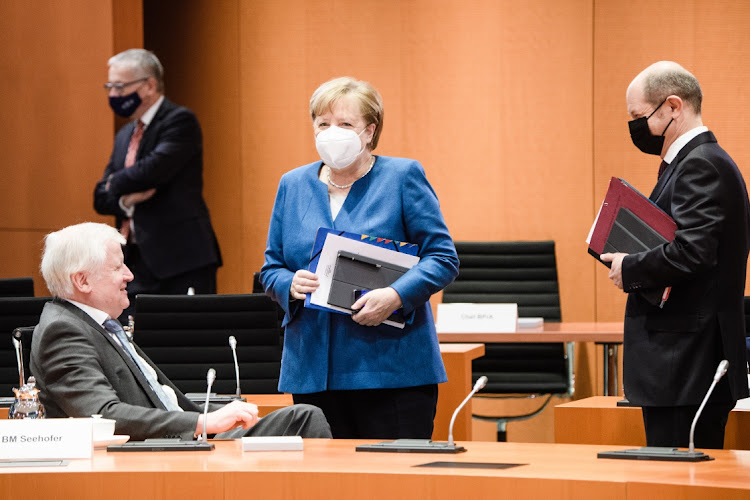 Angela Merkel is starting to crack under the pressure of Germany’s faltering coronavirus vaccine programme.

With the chancellor under fire publicly for a lack of Covid-19 shots and her strategy of delegating responsibility to the EU looking misguided, she snapped when pressed for answers by German state premiers during a closed-door meeting in early January.

Getting angrier than those involved had ever seen, she threatened to retaliate and make the officials’ mistakes public, shocking the participants into silence. On other occasions, she’s come close to tears in public in recent weeks.

“It’s breaking my heart when I see how many people have died in senior homes in loneliness,” she said in a recent speech.

Such emotion is highly unusual for the sober physicist, who has unflappably confronted one crisis after another in her 15 years at the helm of Europe’s largest economy. But, as she prepares to hand over the chancellorship after September’s election, the pandemic seems to be getting away from her. An opinion poll released last week bears that out. Only 11% of respondents thought Germany’s vaccine programme is going well, while 61% saw major shortcomings with the rollout.

A reconstruction of events for this story, which is based on information from government officials who asked not to be identified discussing the private conversations inside the chancellery, shows that the country’s vaccine stumbles bear Merkel’s hand print. Her European focus sparked conflicts within the German government, while relying on an overburdened European Commission hampered the rollout. A government spokesperson declined to comment on the internal deliberations.

The tension has sparked a high stakes power play in Brussels. The EU is taking on AstraZeneca and other pharmaceutical companies, and imposing export controls in an all-or-nothing response to its perceived failings.

In April, health minister Jens Spahn, Merkel’s longtime adversary, contacted BioNTech and offered financial help. In September, the German start-up received €375m in research funding, about three times what its public listing raised in late 2019. In June, Germany invested €300m in another German start-up, CureVac, acquiring a stake and fending off an approach by the Trump administration.

But behind the scenes, a political struggle festered.

Spahn had long been a thorn in the chancellor’s side. The ambitious 40-year-old conservative was an outspoken critic of her refugee policy and was offered a seat in her cabinet in 2018 only reluctantly. The coronavirus crisis offered him a chance to raise his profile, and he planned to take it.

During the first weeks of the pandemic, Spahn gave media conferences almost daily, until the chancellery told him to step out of the limelight. In mid-March, Merkel put the crisis under her wing, and Germany’s relatively mild lockdown contained the spread. The impression was that Merkel had saved the day again.

Flushed with that success, she looked towards Germany’s EU presidency in the second half of 2020. There were big issues to tackle like the testy Brexit negotiations and the landmark recovery fund.

But Spahn kept active. In June, he forged a vaccine alliance with France, Italy and the Netherlands. The goal was to secure as many doses as possible, and on June 13, the group signed a preliminary contract with AstraZeneca for 400-million shots. What could have been good news raised alarm bells in Berlin and Brussels.

As a committed multilateralist, she didn’t want to be remembered saving Germans at the expense of the rest of the EU. Shortly thereafter, Spahn effectively apologised for the initiative.

“We think it makes sense if the commission takes the leadership in this process,” Spahn and his three counterparts said in the letter — which was leaked to the media in January as part of a pressure campaign on Merkel.

Meanwhile, the US was throwing money around as part of Operation Warp Speed. In May, the Trump administration pledged as much as $1.2bn in funding for AstraZeneca’s vaccine project. In July, the US agreed to pay $1.95bn for 100-million doses of the BioNTech vaccine, with an option to acquire an additional 500-million.

Nearly simultaneously with the US deal, the UK also agreed to buy 30-million doses from BioNTech and its partner Pfizer.

Little was happening in Brussels. In July, the commission flubbed a BioNTech offer for 500-million doses amid dithering on price and concerns about super cold storage for the shots.

By the end of the summer, the chancellery was increasingly alarmed about the slow progress, and Merkel asked von der Leyen to speed things up. At end-August, the commission signed a deal with AstraZeneca.

It wasn’t until November 20 that an EU agreement with BioNTech was finalised, 11 days after the company announced that its vaccine candidate was more than 90% effective in clinical trials.

Even that was a struggle. Germany had to guarantee it would take up to 100-million doses and added €192m to the EU’s pot of money for virus deals. But as more studies underlined the shot’s benefits, other member states lined up, and Germany’s allotment was more than halved.

Meanwhile, a bilateral agreement that Spahn signed with BioNTech on September 8 for 30-million doses exclusively for Germany was mired in red tape.

“The process in Europe certainly didn’t proceed as quickly and straightforwardly as with other countries,” BioNTech CEO Ugur Sahin told Spiegel magazine, blaming the EU’s cumbersome bureaucracy and a careless approach. “There was apparently an attitude of: We’ll get enough, it won’t be that bad, we have everything under control.”

While the EU’s procurement process was sputtering, Merkel was presenting herself as the advocate for vaccine fairness. In June, she announced Germany would give €600m to the Gavi alliance, plus €100m for developing countries.

The global approach makes sense from a scientific point of view, and to be sure, there’s still a long road ahead that could allow Germany — still better off than many other countries — to recover.

But politically, it was making her allies squirm, especially as they looked ahead to elections in September. Bavarian state leader Markus Soeder, a leading contender to succeed her as chancellor, has supported Merkel’s European course, but noted: “It’s also not wrong to care about your own country.”

To ease tensions, Merkel will hold a German vaccine summit on Monday, but the pressure remains palpable. When asked recently whether she would be willing to apologise for the missteps, she deflected and instead responded with a lecture about the complex production process, including the role of saline solution.

“Of course we could have ordered more earlier,” Spahn said on Friday, refusing to point the finger publicly at Merkel or anyone else. “It’s the virus that’s our opponent, and not the pharma industry and not each other.”

Covid-19 has taught the UK some painful lessons

At least 100,000 in the UK are dead due to the virus, with Prime Minister Boris Johnson needing some redemption ahead of local elections
World
3 months ago