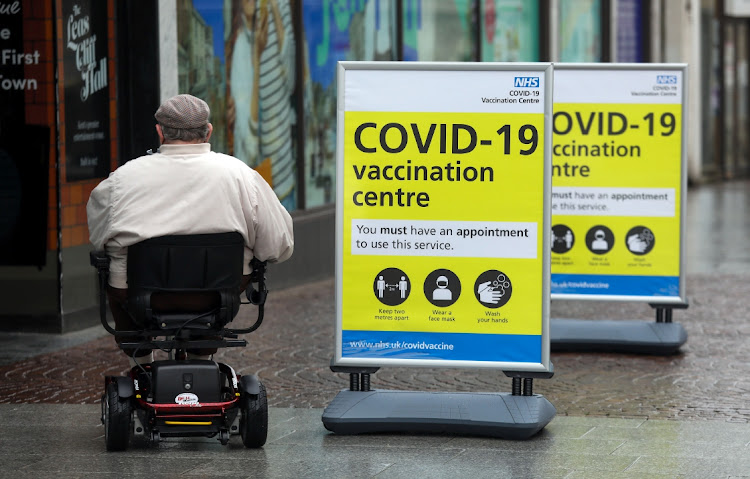 A visitor on a mobility scooter queues for a vaccine in Folkestone, the UK. Picture: CHRIS RATCLIFFE/BLOOMBERG

London — A European dispute over supply of Covid-19 vaccines is threatening to unleash a wider political and economic conflict that could stymie global collaboration needed to end the pandemic.

After accusing UK vaccine maker AstraZeneca of favouring deliveries to its home country, the EU announced a drastic plan to control exports of Covid-19 shots. The retaliatory move may encourage more governments to use economic might — or other means — to protect their interests.

The European Commission’s restrictions “open Pandora’s box”, said Simon Evenett, a professor of international trade at the University of St Gallen in Switzerland. If others respond in similar fashion, “it really would be every man for himself”.

The squabble is opening a new rift in the global effort to slow a pathogen that has killed 2.2-million people and inflamed Brexit tensions between the UK and EU. The bloc is already under pressure to speed up an immunisation campaign that is trailing those in Britain and the US.

In a sign of how fraught tensions have become, the bloc also announced on Friday that it was seeking to limit exports to Northern Ireland, before retreating from the plan hours later. Introducing restrictions between the Republic of Ireland, which is part of the EU, and Northern Ireland would contravene one of the key principles of the Brexit deal, which sought to avoid border controls after decades of violence.

The EU move prompted a rare show of unity from traditional political enemies in Northern Ireland, who uniformly decried the initial decision. Even with the Northern Ireland issue resolved, the bloc’s actions remain hugely controversial and have been criticised by the World Health Organization (WHO), businesses and governments.

The likelihood of such vaccine disputes multiplying looms large after dozens of countries imposed export restrictions on masks, personal protective equipment and medical supplies earlier in the pandemic. Governments and companies have tussled in the past over access to drugs such as new, life-saving HIV medications that were too costly for some hard-hit countries to purchase, said Thomas Bollyky, director of the global health programme at the Council on Foreign Relations.

“This is not just a fanciful parade of horribles,” he said. “You could see this escalating.”

If governments do take aggressive steps, others could hold back shipments of ingredients required to make vaccines, or invoke rights to try to produce shots themselves, though that would be very difficult to achieve without support from the manufacturers, according to Evenett.

The situation could set off “chain reactions that go to unexpected places”, said Richard Hatchett, CEO of the Coalition for Epidemic Preparedness Innovations, the organisation that has worked to accelerate development of Covid-19 vaccines. “It’s really important for countries not to overreact.”

In a show of unity, most European countries started vaccinations around the same time in late December. US re-engagement with the WHO under President Joe Biden also spurred hopes of global co-operation. But maintaining that is not easy in an environment of increasing infections and vaccine supply constraints.

As political pressure rises, “that feeling of solidarity fades”, said Klaus Stohr, a former WHO official who helped mobilise governments and drugmakers to prepare for pandemics.

The stakes of getting economies back on track have also grown. Access to vaccines has become a matter of national security, said J Stephen Morrison, director of the Center for Strategic and International Studies’s Global Health Policy Center. That accounts for the US department of defence’s important role in developing and distributing shots.

“Vaccines are an indispensable element of getting out from under this scourge that’s destroying economies,” he said. “If you can’t get to herd immunity fast, that inevitably provokes a security crisis.”

Biden has said he would use the Defence Production Act, a Cold War-era law, to boost the manufacturing of vaccines and the supplies required to administer them, such as vials and needles. Parts of the act could help increase supply, though other pieces could have a ripple effect for global supply chains, Hatchett said.

If the US were to combine that expanded production with export restrictions, other governments would be tempted to follow, Evenett said.

AstraZeneca now has found itself in the middle of a public row over contract terms, accusations of blame and threats to impose limits on vaccine exports. The EU’s drug regulator cleared the company’s Covid-19 shot on Friday, paving the way for a conditional marketing authorisation, and potentially easing supply concerns. Still, frustrations are running especially high across Europe as more contagious versions of the virus emerge, and every step of vaccine production and distribution is under scrutiny.

For months, the EU has faced concerns that it might lag the US and Britain, raising its vulnerability as the virus advanced. Britain in early December became the first Western country to clear a shot, while the US ploughed as much as $18bn into Operation Warp Speed, adding to the pressure on the bloc.

The EU may secure enough supplies to vaccinate three-quarters of its population by late October, hitting that level more than two months after the US and three months behind the UK, according to the latest analysis by London-based research firm Airfinity. The estimates are based on the supplies governments have secured per capita, production capacity in each region and the expected efficacy of the shots.

While there are few restrictions on using export bans in trade law, nations could try to tamp down on vaccine-related retaliation via the Group of Seven or Group of 20, as has been suggested by the Ottawa Group, Bollyky said. Those nations in November called for restraint in using any export restrictions as part of wider measures in response to the pandemic, and discouraged WTO members from putting tariffs on essential medical products.

Companies could also help defuse the tension by providing more details about their production plans, Evenett said. Bowing to pressure, AstraZeneca published its contract for the delivery of doses to the region. Still, any effort at resolution would need support from governments that are under extreme pressure to provide vaccines to their populations.

“Guidelines would be a way of preparing, they won’t help you in an ongoing dispute,” said Harvey Fineberg, former president of the US National Academy of Medicine. Attempts to set rules for sharing vaccines “would only be interpreted in light of who it would advantage now.”

There is insufficient information on vaccine's effectiveness for people over 65, says health authority
World
8 months ago

More analysis will be needed to see how well it works in older people, says first peer-reviewed data from any of the leading vaccines
World
10 months ago

CEO Pascal Soriot says he does not expect the additional trial to hold up regulatory approvals in the UK and EU, while clearance from the US FDA may ...
Companies
10 months ago
Next Article