Getting the correct ‘shot utensils’ is proving harder than expected for Europe, who is already behind on its vaccination programme 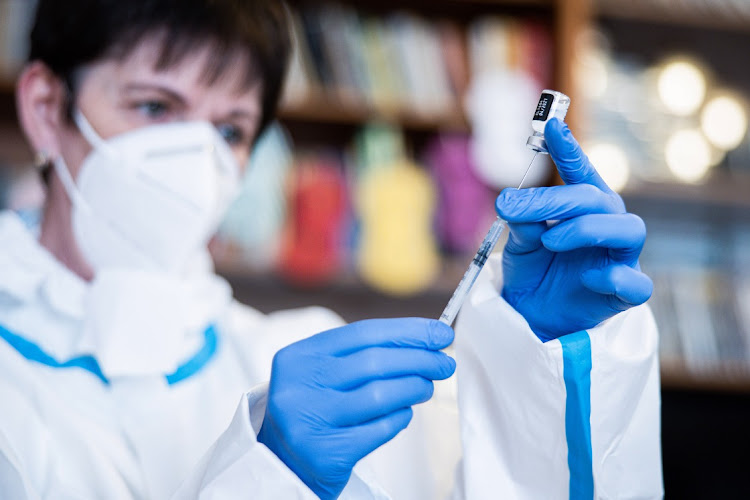 A health worker draws the Pfizer-BioNTech vaccine from a vial in Szombathely, Hungary, on January 27 2021. Picture: BLOOMBERG/AKOS STILLER

Paris/Berling — Laurent Fignon, a geriatric doctor in the south of France, is having to improvise as he gives shots of the Covid-19 vaccine from Pfizer-BioNTech to care-home residents and health staff because supplies of the right needles and syringes are low.

Getting the full six doses from vials of the Pfizer-BioNTech shot — as allowed this month by the EU’s health regulator — requires needles that are both thin enough to minimise waste and long enough to deliver the jab, as required, into the recipient’s shoulder muscle.

Fignon’s hospital in the Mediterranean resort of Cannes was sent needles from the French public health authority that were too short, he said, forcing it to hunt locally for supplies. Other nearby hospitals got the right needles and were generous enough to share some.

“To us, it looks like Russian roulette,” Fignon said. “You do not know what you will be getting.”

Similar shortages are cropping up elsewhere in Europe, complicating a stuttering start to vaccination efforts that have been compounded by warnings from Pfizer and AstraZeneca, its Anglo-Swedish peer, that they will not be able to meet vaccine supply commitments in the near term.

Pfizer now forecasts it will produce 2-billion doses this year, but this assumes it will be possible to extract the full six from each vial. It charges by the dose, meaning the cost of a vial has gone up 20%.

The European Commission is pressing Pfizer and German partner BioNTech to deliver more of the low-dead-space needles to extract the extra dose. A low-dead-space needle is a type of syringe designed to limit the dead space that exists between the syringe hub and the needle

BioNTech says it has procured 50-million needles that it can sell at cost to countries around the world, and is seeking to buy more. That compares with the EU’s order of up to 600-million doses of its vaccine.

Industry executives say that, while output of needles and syringes is sufficient to meet current demand, chaotic ordering means they often do not get to where they are most urgently needed. Work is under way to assess future demand and find ways to meet it, they say.

In Germany, vaccine distribution is handled by the central government but its 16 federal states are responsible for obtaining the needles and syringes needed to inject them — with mixed results.

Some, such as Baden-Württemberg and Thuringia, had the good fortune to order the right kind of needles and syringes early on. But others, including Bavaria, Saarland and Lower Saxony, didn’t and are having to place follow-on orders, say officials.

Saxony, on the Czech border, is also having to shop around as scarce supply forces up prices, said Lars Werthmann, regional head of vaccine logistics at the German Red Cross. “We can’t afford to forfeit a single dose at the moment. And we can’t justify failing because of a 5c syringe,” Werthmann said.

Europe’s leading maker of injection equipment, the privately owned German company B Braun, says it faces increased demand for syringes and other products needed for vaccinations.

“With our competitors, we are currently able to cover all demands in connection with products needed for the vaccinations,” said spokesperson Christine Bossek. “We are working in parallel on solutions to ensure this will also be the case in the future.”

German medical technology industry association BVMed said there are no production bottlenecks and that supplies of syringes and needles are adequate — but muddled orders are complicating distribution, calling for better co-ordination.

Switzerland has placed orders for “shot utensils” to deliver five doses per vial. With six now allowed, it is in talks with Pfizer to supply equipment needed to draw that number of doses, the Federal Office of Public Health said.

Officials in Britain, which has made a faster start to its vaccination drive, say that health teams are well supplied with the right injection kit.

Back in Cannes, Fignon says he and his colleagues have managed to extract six doses from the Pfizer vials but this will not last unless doctors get the equipment they need. “Some countries had the right equipment from the very start; we did not here in France,” he said.

The French health ministry has acknowledged that extracting the sixth dose is challenging and requires specific equipment. It said it is in the process of ensuring the right needles and syringes reach doctors.

In addition to BioNTech’s pledge to supply needles at cost, Pfizer said it is in close discussions with the European Commission and EU governments on their vaccination plans, including “supporting governments in securing supply of low-dead-space syringes should they need”.

While a poll found eagerness to get the vaccine is rising across racial groups, white adults are still the most likely to get a shot
World
7 months ago

There is insufficient information on vaccine's effectiveness for people over 65, says health authority
World
7 months ago
Next Article