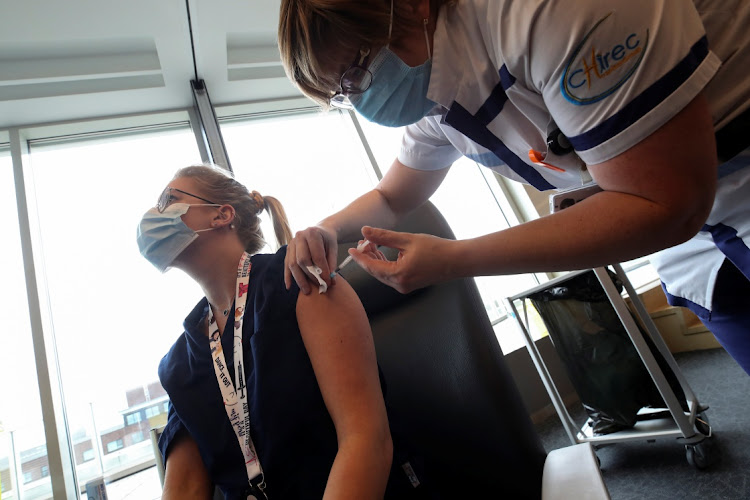 A medical staff member receives a dose of the Pfizer-BioNTech vaccine at the CHIREC Delta Hospital in Brussels, Belgium, January 21 2021. Picture: REUTERS/YVES HERMAN

The EU has proposed setting up a register of vaccine exports, amid frustration over delays in deliveries of AstraZeneca’s vaccine and other supply problems.

“I can understand that there are production problems but then it must affect everyone in the same way,” health minister Jens Spahn told ZDF television. “This is not about Europe first but about Europe’s fair share,” he said, adding it therefore makes sense to have export limits on vaccines.

AstraZeneca told the 27-country EU on Friday it could not meet supply targets for its vaccine up to the end of March — a further blow to the bloc’s pandemic efforts after Pfizer announced a temporary slowdown in supplies in January.

AstraZeneca said on Monday its CEO had told the EU it is doing everything it can to bring the vaccine to millions of Europeans as soon as possible.

An EU official said AstraZeneca had received an upfront payment of €336m when the EU sealed a deal with the company in August for at least 300-million doses and an option for another 100-million. The deal was the first signed by the bloc to secure Covid-19 shots.

Britain’s vaccine deployment minister Nadhim Zahawi said that though supplies are tight, he is confident Pfizer, AstraZeneca and Moderna will meet their commitments. “Any new manufacturing process is going to have challenges, it’s lumpy and bumpy, [then] it gets better, it stabilises and improves,” he told BBC TV on Tuesday.

Spahn said it is encouraging that the number of new coronavirus cases is falling in Germany and that if the trend continues a decision can be taken on future restrictions.

Schools and nurseries would be the first places to reopen, he said.

German hospitals association DKG said on Tuesday that about 4,600 Covid-19 patients are in ICU in the country, down from a peak of 5,781 on January 4. “The lockdown is working, but still, this is not the time to sound the all-clear,” said DKG head Georg Baum.

Germany wants the EU to limit vaccine exports, as AstraZeneca sparks a backlash after saying initial deliveries would be delayed
World
2 months ago

The EU, with a population of 450-million, has already secured nearly 2.3-billion vaccines and candidates from six companies
World
3 months ago
Next Article