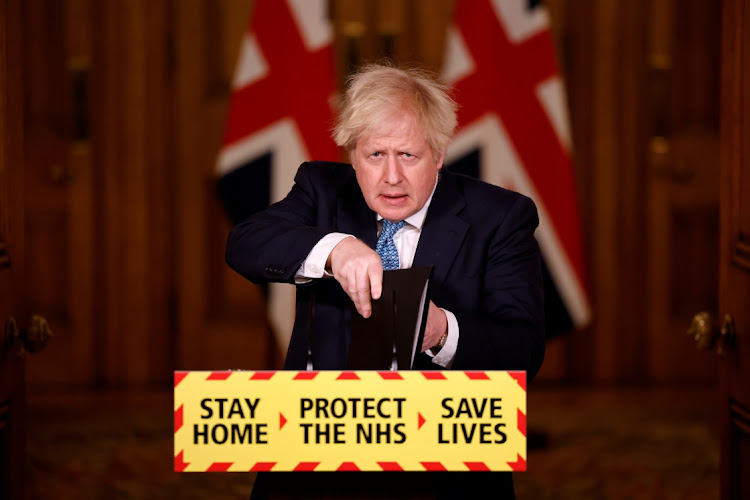 London — Prime minister Boris Johnson faces a threat to his leadership from rebels in his Conservative Party who are demanding a clear path out of the UK’s economically damaging lockdown.

Steve Baker, a senior rank-and-file MP, said in a letter to his Tory colleagues it could be a “disaster” if pandemic restrictions last until spring.

He urged them to contact Johnson’s team to warn that the premier’s position will be at risk unless he announces a route out of the current measures.

“Government has adopted a strategy devoid of any commitment to liberty without any clarification about when our most basic freedoms will be restored and with no guarantee that they will never be taken away again,” Baker wrote. “If we continue forward with a strategy that hammers freedom, hammers the private sector, hammers small business owners and hammers the poor, inevitably the prime minister’s leadership will be on the table.”

Baker, a former minister, said he would rather not topple Johnson, but he urged his colleagues to take stock of the risks in order “to avoid severe problems later.” He later posted a more emollient tweet, saying Johnson is “the only person” who can lead the UK out of its current difficulties.

The UK entered its third national lockdown last week, with schools, non-essential retail and hospitality businesses all forced to close. The economy already suffered its deepest recession for more than 300 years as a result of the first shutdown last year and is at risk of being tipped into a double-dip contraction.

It is not yet clear how much support Baker will have for his move, but he is an experienced campaigner and an influential figure among rank-and-file Conservative MPs.

Previously leader of a pro-Brexit group of MPs who put pressure on successive prime ministers over the UK’s divorce from the EU, Baker is now concerned about the impact of the government’s pandemic strategy on the economy and individual liberty.

He is one of 55 Tories who voted against Johnson’s pandemic plan for a tougher system of tiered restrictions organised by regions in December.

On paper, it would take only 40 Tory MPs to vote against the government to inflict a defeat on Johnson if all the opposition parties also decided to block the prime minister’s plans. Similarly, if 55 Conservatives submit letters of no confidence in the premier, it would trigger a vote on whether he should continue as party leader.

In last week’s vote on the third lockdown, only 14 Tories opposed the measures but many others raised concerns during the debate about how long the lockdown will last.

The current rules could continue until the end of March but Baker’s supporters say the arrival of vaccines should mean the restrictions on daily life and commerce are lifted sooner. Johnson aims to vaccinate the 15-million most at-risk people and carers by February 15.

In his letter, Baker urged Tories to tell the party’s chief whip — the official responsible for internal discipline — that the “debate will become about the prime minister’s leadership if the government does not set out a clear plan for when our full freedoms will be restored, with a guarantee that this strategy will not be used again next winter.”

In 2021, Brits who put their faith in the Tory leader and his Brexit commitment will get to decide if they were right to follow the man and his ideals
Opinion
3 months ago