Johnson set to win approval on Wednesday from both houses 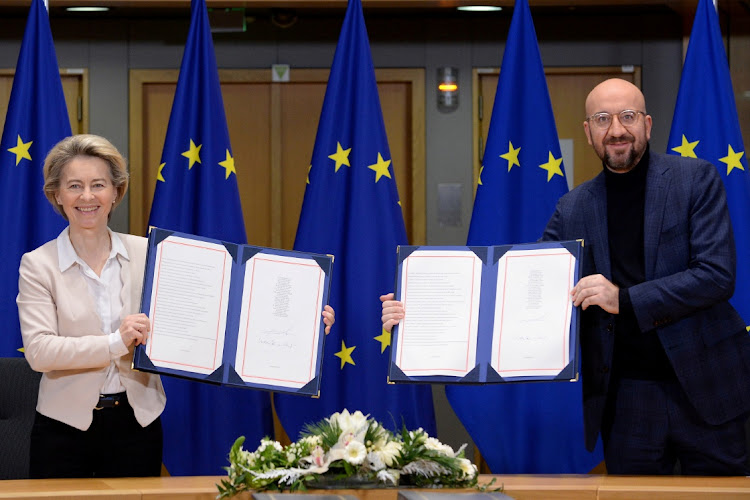 London — UK Prime Minister Boris Johnson will rush his Brexit trade deal through parliament in a day, confident it will be approved with ease after a prominent group of hardliners in his Conservative Party said they will back the accord.

The main opposition Labour party will also support the agreement, even though it has criticised it for being inadequate, because it says the alternative of crashing out of the EU without one would be worse.

The House of Commons is expected to vote on the deal at about 2:30pm on Wednesday and the House of Lords later in the evening, ensuring the legislation is pushed through in time for the end of the transition period at 11pm on Thursday.

The agreement was signed earlier in the day by European Commission President Ursula von der Leyen and European Council President Charles Michel, before being flown to London for Johnson’s signature.

“We will now open a new chapter in our national story,” Johnson will tell lawmakers, according to his office. “We shall be a friendly neighbour — the best friend and ally the EU could have.”

By the end of the day, the accord is set to be law in the UK, capping a dramatic 12 months for the prime minister. After winning a commanding majority on the back of a promise to “get Brexit done,” his team managed to negotiate the agreement while minsters at home battled the coronavirus and the worst recession for more than 300 years.

The so-called European Research Group (ERG) of Conservative MPs, who repeatedly torpedoed Prime Minister Theresa May’s negotiations with the EU, said in a statement on Tuesday that Johnson’s deal “reaffirms the sovereignty of the UK” and urged its members to vote for it.

The decision means Johnson can be confident he will not need to rely on the opposition Labour party to win the vote — an outcome which could have dented his authority.

May repeatedly failed to get her own Brexit deal with the EU through parliament in the face of ERG opposition. A group of 28 so-called Spartans from the ERG voted against her three times and ultimately forced her out of office.

Instead, it is Labour leader Keir Starmer who faces a big rebellion after he ordered his own MPs to support the bill. Prominent lawmakers including former Shadow Chancellor John McDonnell have urged Starmer not to back Johnson’s deal when it is put to a vote.

Starmer said last week that, while the agreement is inadequate, voters wouldn’t forgive his party if it enabled a no-deal split from the UK’s largest trading partner.

Labour isn’t alone in criticising the deal. There has been vociferous opposition from fishermen’s organisations and the Scottish National Party, as well as businesses which say they need more time to adjust to regulations agreed just a week before they come into force.

The MSCI was up 0.3%, extending recent gains, and early gains in Europe were broad-based, with all major indices rising
Markets
3 months ago