Poland and Hungary standoff is over with $2.2-trillion EU stimulus approved

The German-brokered compromise on the budget offers reassurances, but the rule-of-law provision will remain in place 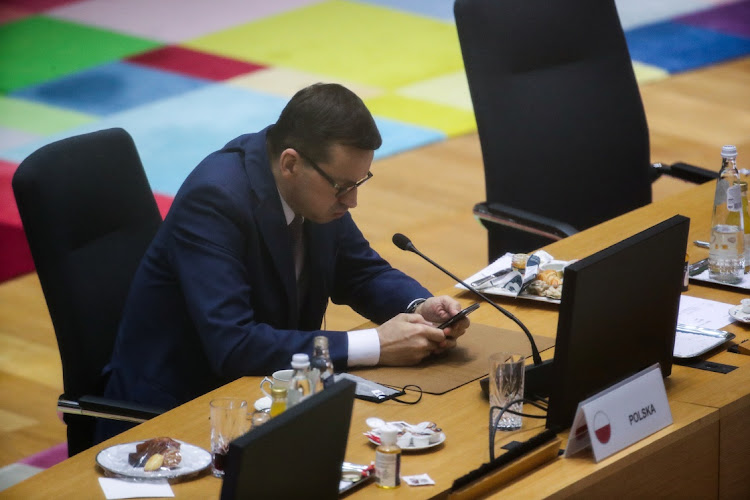 Brussels/Bucharest — EU leaders meeting in Brussels have resolved a standoff with two eastern member states that threatened to delay a historic $2.2-trillion budget and stimulus package just as the latest wave of coronavirus infections ravages the continent’s economies.

A deal was agreed on Thursday with Hungary and Poland, which had angrily protested a mechanism tying funding to upholding democratic norms. The agreement paves the way for the EU to put into effect not just its seven-year budget but a €750bn pandemic relief package that will be financed by joint debt.

The leaders also agreed to more aggressive cuts in greenhouse gas emissions over the next decade, paving the way for Europe to become the world’s first climate-neutral continent. The bloc will cut pollution by at least 55% by 2030, up from 40% previously.

“The agreement will help us provide a strong economic response to the crisis while preserving the rule of law,” European Commission president Ursula von der Leyen said on Friday morning after the all-night meeting, adding that the stimulus is a key component to the EU’s climate ambitions. “Today’s agreement puts us on a clear path towards climate neutrality in 2050.”

The German-brokered compromise on the budget offers reassurances over how the new conditions will be applied, but the rule-of-law provision will remain in place. The dispute was the culmination of years of clashes between Brussels and the two countries over everything from political meddling in the judiciary to LGBTQ+ rights.

Under the compromise, the conditionality will only kick in from January 1 and relate to commitments under the new budget. Penalties, meanwhile, will only be enacted after the European court of justice has had its say, which could take months.

Rule of law vs money

In truth, Hungarian Prime Minister Viktor Orbán and Polish counterpart Mateusz Morawiecki had backed themselves into a corner by repeatedly decrying the link between EU financing and democratic standards. That mechanism, agreed on in the summer between the European parliament and Germany — which holds the bloc’s rotating presidency — was supported by the rest of the EU, in particular states such as the Netherlands that want more scrutiny over how cash is spent.

Morawiecki said he had no choice but to drop the veto, as in such a scenario “we could have ended up with a rule-of-law mechanism but without the money”.

Gergely Gulyás, Hungary’s minister in charge of the premier’s office, said the deal prevents the budget being used for “political attacks” and includes all the guarantees that Hungary and Poland requested. But the junior coalition party of Poland’s hardline justice minister, Zbigniew Ziobro, questioned whether the agreement will allow his country to remain “sovereign”.

Swedish Prime Minister Stefan Löfven said that the declaration that allowed for the agreement didn’t change the original rule-of-law mechanism that had been agreed by member states. “There’s no compromise on the content, no compromise on the text,” Löfven told reporters in Brussels before the start of the summit. “We declared things we needed to declare.”

There was a lot at stake for Hungary and Poland. The pair are the biggest net beneficiaries of EU cash, helping their economies close the gap on their richer neighbours to the west, and are in line for at least €180bn from this spending package.

Had they gone ahead with their vetos, the EU would have switched to an emergency budget from 2021. That would have seen funding plunge in almost all areas and potentially put Poland and Hungary at the back of the line for even the limited development aid that would be available.

Investors cheered the deal, with the zloty and the forint among top performers against the euro on Thursday, marking a third day of gains.

EU leaders agree to a deal to unblock €1.8-trillion budget and recovery fund

Poland and Hungary drop objections after EU leaders agree to issue a declaration stating that the rule-of-law link to funds will be applied ...
World
7 months ago

The deal would unblock the EU’s $2.2-trillion budget and pandemic stimulus plan
World
7 months ago
Next Article